The Brand Went Too Far! Dolce & Gabbana Wants You To '#Boycott'

The Italian fashion house wants you to boycott its brand. 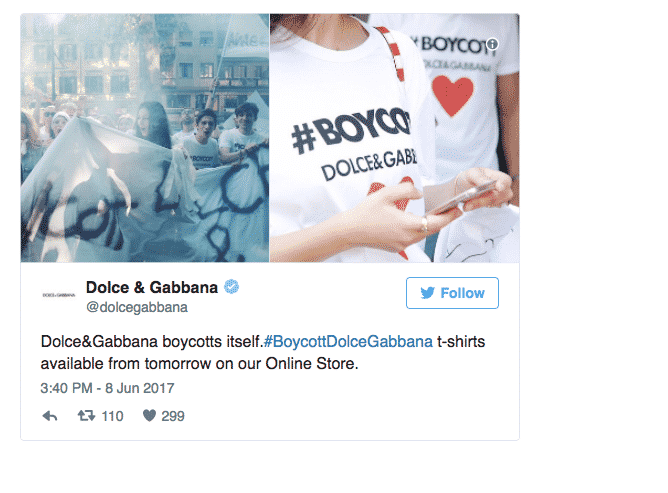 The $245 white shirt is sold online and has been recently promoted on D & G’s social networks featuring a trollworthy hashtag, #BoycottDolce&Gabbana, and a fake protesting video attached.

Did the brand go too far, or what?

The design house seems confused and petty. Over the last few months, D&G has dressed Mrs. Trump for numerous events both in the U.S. and abroad. For example, the first lady wore a $51,000 floral silk jacket during a trip to Sicily. The stunning jacket made headlines not because it was amazing but because it was expensive.

One of the brand’s founders, Stefano Gabbana, even expressed his support for the first lady his personal social media account. Given the current political climate, fans of the brand and opposers of Mrs. Trump’s husband are not having it. The brand is not just facing some backlash from  fans and customers on social media and beyond; fashion blogs have also expressed their dismay. For one, it’s mocking the act of protest, especially with regard to President Trump and his controversial policies.

This isn’t the first time the brand has come under fire for selling questionable merchandise. For its 2013 spring ready-to-wear collection, D&G sent a pair of figurine earrings and a fabric-printed dress bearing Blackamoor images down the runway. The drop earrings and dress were deemed culturally inappropriate.

Then in 2016, D & G named a pair of gaudy sandals “Slave” shoes, although many e-commerce sites renamed the shoe.

Last, Corinne Foxx (daughter of Jamie Foxx) and Lori Harvey (daughter of Steve Harvey) were both named D & G brand ambassadors, which makes makes us wonder if this is really about diversity inclusion or another marketing campaign with a hidden agenda.