After being wowed by the ancient pagodas across the plains of Bagan, Myanmar, I headed back to Southeast Asia, this time to Siem Reap, Cambodia to visit the religious, spiritual, and artistic highlights the city had to offer.

Cambodia is a country rich in natural resources and beautiful landscapes; however, reading about the city didn’t prepare me for the poverty I witnessed when I landed in Siem Reap. After nearly thirty years of violence and political turmoil from the Cambodian Civil War, the Khmer Rouge regime, and the mass executions of millions of people in the capital city of Phnom Penh, abject poverty is prevalent throughout the country. But things are turning around thanks to tourism, one of Cambodia’s primary sources of income, making now the perfect time to visit.

Siem Reap, a three-and-a-half hour drive from the capital city, is an extremely tourist-friendly town and the locals are kind and welcoming. While you aren’t likely to see a lot of Black people while you tour the city, the people of Siem Reap are gentile, chatty and inquisitive, but not offensively so. During my visit, several locals called me “Michelle Obama” even though I look about as much like the First Lady as I do her husband. Nevertheless, the mixup made for some good conversations and even better travel stories.

When traveling in Siem Reap the easiest way to see the city is by Tuk Tuk, a small three wheeled motorized taxi. Grabbing a Tuk Tuk is easy because drivers line up outside hotels, or you can flag one down on the street. Consider hiring a driver for the day, which will only cost around $20. The price sounds incredibly cheap by U.S. standards, but in Cambodia, the minimum wage is roughly $30 per month, so drivers are more than happy and accommodating to have a guaranteed wage for the day.

Siem Reap is a city rich in culture and sacred spaces, and dress codes are strictly enforced, even for men. Bare shoulders and shorts that do not cover your knees are prohibited in religious shrines, monasteries, and temples like Angkor Wat and Angkor Thom. When visiting these revered places be prepared to respect the culture and dress accordingly.

Ready to explore Siem Reap? Here are 5 things you must experience in the vibrant city.

Known as “Temple City,” Angkor Wat is one of the modern wonders of the world and is arguably Cambodia’s most famous attraction. Now a UNESCO World Heritage Site, Angkor Wat was initially constructed as a Hindu temple by the Khmer king in the early 12th century. Appearing on the national flag, Angkor Wat is the largest religious monument in the world, and its most striking features are the intricate bas-relief carvings engraved on the walls throughout the entire complex. If walls could talk…wait…these do, and each carving tells a story. Hire a private guide to decode the stories behind the engravings during your visit, but just know, some of these stories will make you blush. Get up early and make it there by sunrise to capture the energy and some unforgettable photos.

Cost: $20 for the entrance fee 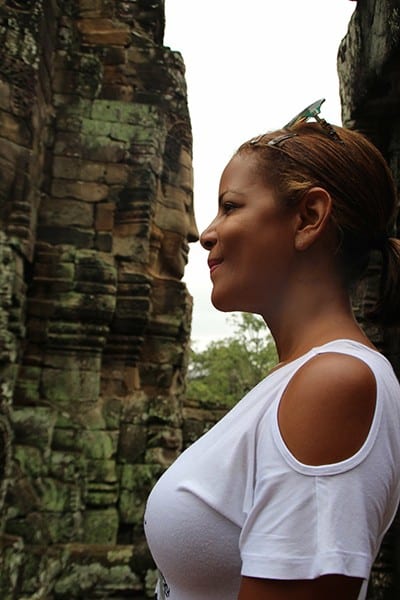 Photo by Lisa Bonner
This ancient walled city is the second most visited temple complex in Cambodia and a short ride from Angkor Wat.  Built in the late 12th century as an official state temple of the Khmer king, Angkor Thom was constructed as a Buddhist temple, yet incorporates Hindu elements. Its claim to fame is the Banyon Temple, featuring hundreds of smiling Buddhas, which is constructed in a perfect square. According to local tradition, if you stand in the center of Banyon Temple you’re at the exact intersection of heaven and Earth. Just being there gave me an incredible sense of euphoria, and the smiling Buddhas seem to have permeated my soul. Cap off your visit at Angkor Thom by taking an elephant ride around the ruins of the temple. But don’t bother paying the inflated prices online. Sign up for an elephant ride when you get there, and it’ll only run you about $15.

The resort town of Siem Reap is easy to maneuver on foot and many of the main attractions, such as Pub Street, are within walking distance. The town has plenty of restaurants, from Mexican to Thai, lining the streets, and of course, authentic Cambodian cuisine abounds. Before you arrive, book a table at Cuisine Wat Damak, one of Asia’s top 50 places to dine. The restaurant dishes up Cambodian cuisine with a French flair and was named the best restaurant in Cambodia by Gran Turismo. While Cuisine Wat Damak has great reviews, the best part is that you can can enjoy a luxurious six course meal for just $28. After enjoying a delicious meal, head to the Old Market, a grand bazaar of shops whose proprietors sell everything from jewels and clothes to spices to lamb shanks. Here you can pick up souvenirs, furniture, or artwork, all of which can be easily shipped to your home.

Around town, there is no shortage of places to get your relaxation on, from fish pedicures to the famous Khmer Massage. But don’t be fooled by the word “massage.” Some of the rub downs are far from relaxing; instead, they’re more like a vigorous sports massage than a soothing Swedish one. Walk into any of the parlors and have a look at the menus and ambience to see which one best suits your preference. Whether you want to be gently kneaded, or pulled in various directions at once, a 90-minute massage rarely exceeds $40.

Where to Stay: Park Hyatt Siam Reap. Be sure to check out their indoor-outdoor pool deck.

Hire a private car to take you a few kilometers south of Siem Reap, and hop on a private boat to cruise the vibrant Tonle Sap Lake (under $40.00). This is more than just a waterway; this region is a village and more than 1,100 families call the banks of this lake home. Sail down Tonle Sap Lake and marvel at the stilt houses and houseboats, and soak in the vibrant eco system, which boasts over 200 species of fish. While you’re cruising, visit a floating market and make a stop at one of the lakeside restaurants for an authentic meal.

A thriving art scene probably isn’t what comes to mind when you think about Siem Reap, but over the past several years, the town has evolved into a bustling cultural hub. Each year, some of the world’s top photojournalists descend on the town for the Angkor Photography Festival, and the city has a host of galleries to browse. Have your Tuk Tuk driver take you to Artisans d’Angkor dedicated to preserving the Khmer arts while giving back. While there, sign up for a workshop or shop in the gallery. Best of all? A portion of the proceeds supports the local artisans and the community.

Affordability and one-of-a-kind cultural experiences makes Siem Reap a must see. There are no shortage of ways to experience this glorious city, either on your own or by hiring a guide, and best of all it’s cheap. In in Siem Reap, a little money goes a long way, and will help you create memories of a lifetime.

Lisa Bonner is an Entertainment Lawyer and travel aficionado on a path of creative transformation. Follow her on Twitter @lisabonner.