Amin Joseph Talks 'Snowfall,' Reflecting On the '80s & The State Of Black Entertainment

Scene-stealer, Amin Joseph, is ready to return to the 1980’s. Starring as Jerome Saint, a small-time drug dealer in John Singleton’s ’80-set series Snowfall, the New York native will take us on a journey to unmask the early days of the crack-cocaine epidemic in South Central LA.

The series follows Franklin Saint (Damson Idris), an ambitious 20-something, who shifts from selling bags of weed for his Uncle Jerome to peddling crack cocaine throughout his neighborhood. It was the beginning of an era that would birth gang warfare, unimaginable wealth, and the war on drugs.

Joseph is no stranger to the big or small screens. Most recently, he’s starred in Baywatch opposite Dwayne “The Rock” Johnson and Priyanka Chopra, and he’s also been seen in everything from FX’s The Shield to Southland to NCIS. Recently, we sat down to chat with Joseph about Snowfall, what he’s learned from Singleton, and what it was like to return to the ’80s.

Amin Joseph: It’s been a cool ride. [It’s] a period piece, and it kind of deals with a part of our history that was swept under the rug.

EBONY.com: How did you get involved with the series? Was it something that came across your desk? Had you heard about the fact that John Singleton was making this project?

AJ: I had heard about it, through the trades initially, because this project has been floating around for a few years now. They initially did a pilot of it, and the pilot was reworked and retuned over at FX. I’m part of the second installment of it. So it kind of came to me through auditioning. I auditioned for it, but the process moved really fast the second time around.

EBONY.com: What was it like to work with John Singleton, who is this really prolific director who has had so much influence in Black cinema and the industry in general?

AJ: Well, you know, John is a trailblazer in the industry, and anytime that his name is attached to something it brings a certain cache to the project. But, what was personally cool to me, is the fact that as an executive producer, he was on set nearly every day. He was shooting Rebel at the same time. He had to split his time, but we never felt as though he wasn’t there. I don’t know how he did it. Maybe he cloned himself. I’m a New Yorker, so there are certain sensibilities. I was born in the ’80s, but I don’t remember all of the ’80s. Especially from ’83, I don’t remember that. To have someone like him there on set, and being able to get first-hand knowledge, (just the little things) because when you’re building a character, it’s the specificity that starts making a well-defined character. So, to have him there, and say this is how we used to say things, it’s a certain little twang on this, or let me tell you a story about this neighborhood while I was growing up. The little things just add to a colorful and true portrayal. You want to lead from imagination, but you also want some real authenticity, and to me, [John] brings that, especially working one on one with the actors. 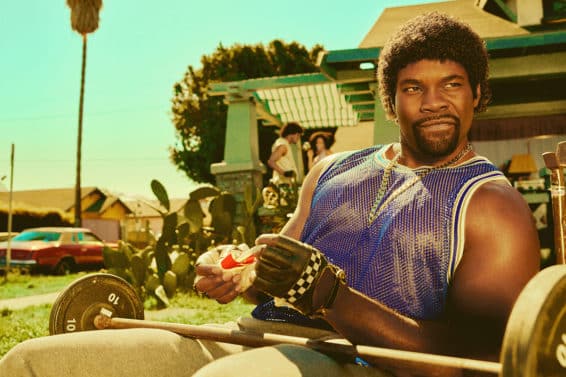 EBONY.com: You grew up in Harlem, and this is a story about how crack cocaine came through South Central LA, so did you really use John as a sounding board to learn about that specific period and the war on drugs and everything that came with that?

AJ: There’s a lot of documentaries now we’re starting to uncover [and] unearth. We have Gary Webb, with whistle-blowing from a journalistic standpoint. A lot of the things that happened with the United States funding wars and being able to make money and cocaine being a thing that was traded. So, to me, now that we see a lot of these things that are declassified there’s a lot of stuff there to learn. My own personal experience, growing up in Harlem, I do remember growing up during that crack era. I do remember the “Just Say No” campaigns and things of that nature when we were in school, and you were like, “Just say no, like to what? We’re not even thinking about drugs.”

EBONY.com: Let’s talk about your character Jerome. Who is he? I know you probably can’t reveal too many spoilers but if you can give us some sensibility about who this guy is and what role he plays in Snowfall.

AJ: Like many of the transplants to Los Angeles, Jerome and the Saint family, they migrated from the South. A lot of the families that are in South Central or Southern California as a whole came from Louisiana or Mississippi or Texas and Alabama. So, the beautiful thing about having this early ’80s [story] is that it’s not what we’ve seen from stories about Los Angeles in the ’80s. That’s usually around N.W.A. [or gangsta rap], but this is before that. These people were inspired a little bit more by funk and disco. Families haven’t been torn apart by drugs. There is heroin, but we’re just stepping into that and [fathers] leaving the home. That’s something that you do see with the lead character, that his father isn’t there, that he’s estranged from the family. These are those first single families that have now almost become a staple within the African-American community. That’s what Franklin’s character is going through and Jerome, his uncle, his mother’s brother, is a father figure for the young man. He’s not perfect. He’s present, but he’s not perfect. So, when we meet Jerome, he’s the small time drug dealer that’s comfortable within his neighborhood; kind of [the] king of his castle, being able to take care of his immediate surroundings and able to give his nephew a job selling.

AJ: Challenging, that’s interesting. You know, I haven’t really been challenged yet on screen. Theater is usually a nice challenge because that’s what my background really is. Just because of the type of rehearsals and there’s just a different type of vigor. To be a stage performer, there’s just more of a toll on the body, the voice, projecting, and the live performance aspect of it. It’s a different thrill. So, I probably had more challenge in that arena, but I would also say producing, which I’ve dipped my hat in.

EBONY.com: What is your opinion about the state of cinema for Black men today?

AJ: A couple of years ago there was this whole hashtag thing [with] #OscarsSoWhite. In some sense, I feel kind of like you can give someone fish, or you can teach them to fish. I think that no matter what, because it’s of the last let’s say three years, there has been a great, almost proliferation of Black series and it’s been a boom of diversity. Some of it was force fed, and some of it was actually created and secured.  I do think that ownership is very important because it can be played today and it can be canceled tomorrow in just the same way. We want to make sure that our culture isn’t fetishized just for the moment or just for the political cycle. I think if this next year it goes back to being under-represented or misrepresented. That means that there isn’t a cure of just throwing roles at Black actors or giving some limited type of inclusion. It’s important for us to make our own, to hire our own, to support our own [and] for us to make quality stuff that an audience wants to buy and really have our own ecosystem of our own businesses, our own corporations and we don’t have that. It always seems as though it’s almost like a political thing where we’re asking for representation, or we’re upset about something [that] got canceled. The bottom line is that shareholders don’t work like that. If we want our representation, [we must] consistently invest in and support the type of art that we want to represent us, instead of asking, and sometimes all-out demanding or boycotting a system that was not set up for us in the first place.