Are you the Internet answer to “Can’t Get Right” or what?

As if your confused friend Lena Dunham didn’t make a big enough fool of herself with a highly questionable, self-obsessed rant about why a grown, independent man (and fellow celeb, TBH) didn’t jump out of his skin to make friends with her at the Met Gala.

I won’t make you suffer through her neurotic musings in this space, but if you care to look into the mind of a narcissist, follow this link and then come right back.  I’ll wait.

Alright, after wisely atoning for the highly problematic content of her character, using all the right buzzwords in all the right places, it seems that she tagged in “comic” Schumer to take her place as the town dunce.

I owe Odell Beckham Jr an apology. Despite my moments of bravado, I struggle at industry events (and in life) with the sense that I don’t rep a certain standard of beauty and so when I show up to the Met Ball surrounded by models and swan-like actresses it’s hard not to feel like a sack of flaming garbage. This felt especially intense with a handsome athlete as my dinner companion and a bunch of women I was sure he’d rather be seated with. But I went ahead and projected these insecurities and made totally narcissistic assumptions about what he was thinking, then presented those assumptions as facts. I feel terrible about it. Because after listening to lots of valid criticism, I see how unfair it is to ascribe misogynistic thoughts to someone I don’t know AT ALL. Like, we have never met, I have no idea the kind of day he’s having or what his truth is. But most importantly, I would never intentionally contribute to a long and often violent history of the over-sexualization of black male bodies- as well as false accusations by white women towards black men. I’m so sorry, particularly to OBJ, who has every right to be on his cell phone. The fact is I don’t know about his state of mind (I don’t know a lot of things) and I shouldn’t have acted like I did. Much love and thanks, Lena

Exhibits A through Z: This tweet that Mic.com caught before Schumer, in an act of belated logic, attempted to erase it from the Twittersphere. 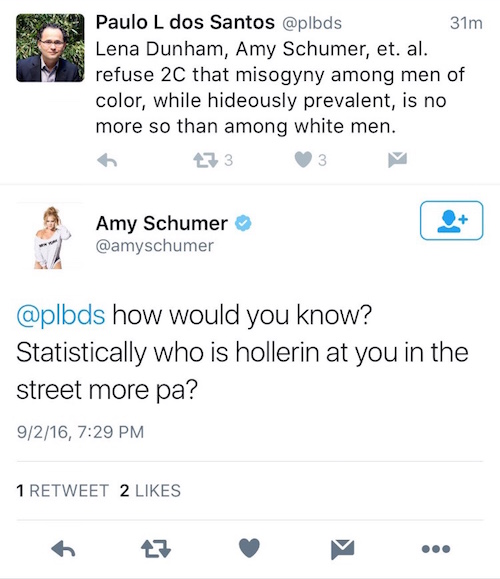 “Who is hollerin at you in the street more pa?”

Let’s drink that in for a moment, shall we?

Is this Cabbage Patch Kid come to life a statistician unbeknownst to us?  Has she, in addition to stunt casting LeBron James in her aptly named Trainwreck, taken up polling women to see if men of color are the biggest offenders in catcalling?  Or perhaps she has the aid of an Eye in the Sky to scan the land and catch more of these minority men hissing, whistling and admiring the ladies of the planet?

In any case, I will need to see ALL the receipts on her secret career.

Madame Schumer is opening up a very dangerous lane and one that is fraught with racial, socioeconomic and cultural stereotypes.  Since, based on her show, movies and supposedly cute commentary on race, she gives the distinct impression she lives in a pretty homogeneous world….one similar to “Girls” in the lack of anything more colorful than the dialogue in her script.  It would serve her well not to anoint herself the Minister of Multicultural Catcalling.

In fact, her best chance at a title would be Minister of Misinformation and/or Minister of Misguided Tweets.  I’ll politely invite her to log off social for a bit and reconsider her position.  I’m sure it’ll be difficult for her to reflect and concentrate, what, with all these men of color pursuing her up the street.

Pardon me, while my eyes roll all the way back until I’m comatose.