Being the 'Black Sheep' of the Wine Business

In a third floor loft a few blocks from Madison Square Garden, eight people are deciding what wine New Yorkers will drink.

From 10 a.m. to 5 p.m. each day, the staff at Banville & Jones Wine Merchants swirl, sip and spit around a conference table as a stream of global winemakers pitch new vintages, hoping the distributor will push their wares just a little harder.

This morning, an Italian winemaker is first up with a new portfolio of Barolo and Chianti.  Then comes a French maker, representing a vineyard owned by the same family for generations.

Moments later, Andre Hueston Mack — of Brooklyn — dips his head and sneakers in the door. The French guy is running overtime. Someone flashes Mack a signal for “wait fifteen minutes”.

More sipping, more spitting. The Frenchman’s 15 minutes stretches to 45 and ends to polite applause. Next up is Mack.

“You guys do this all day?” an observer asks of the merchants. “All day. Every day” is the response. 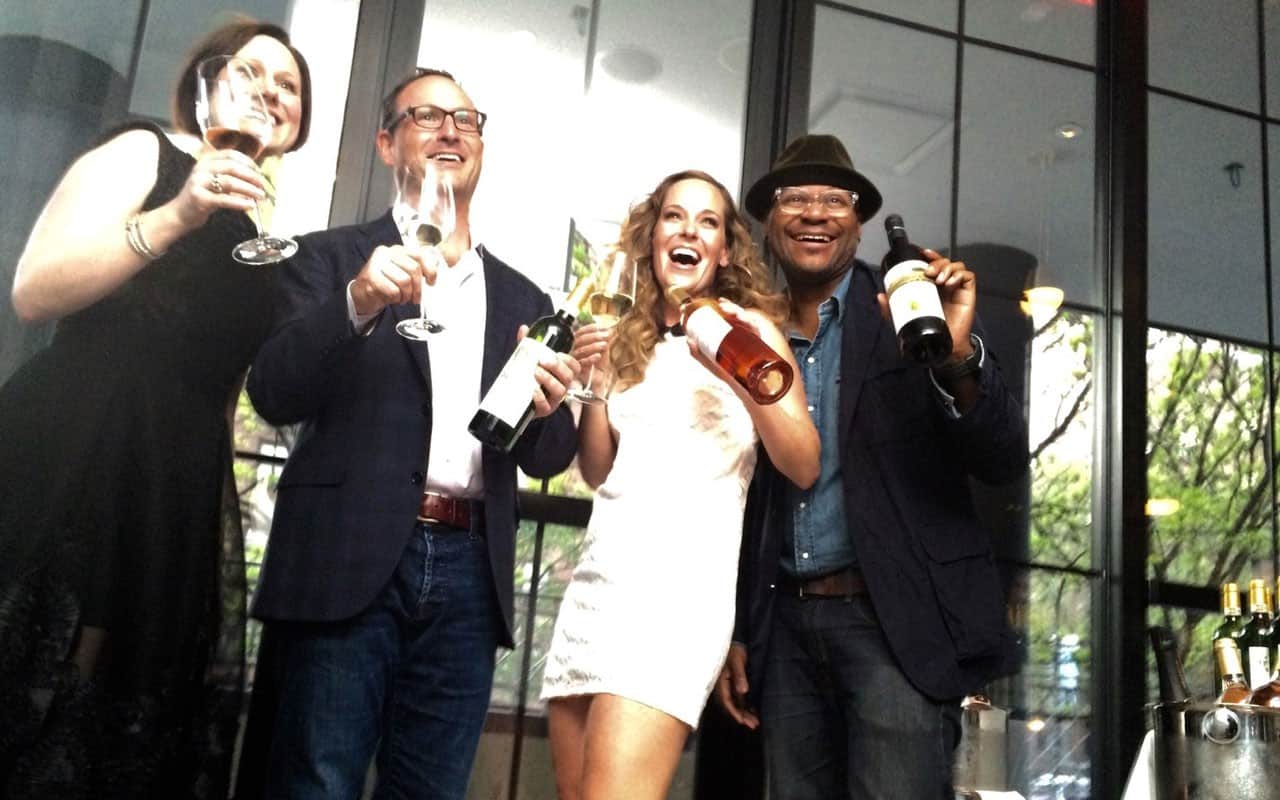 Mack at eBay Uncorked, the launch of the website’s new wineselling venture.

Mack sets out his bottles and begins to spin the tales of his own Mouton Noir collection of “garage wines”. The “Bottoms Up” white blend (75% Riesling, 8% Viognier and the rest Pinot Blanc) has “…opening notes of diesel, kerosene, with floral tones. It’s light, easy, not too angular,” Mack explains. He admits that it has come a long way since its release when a buyer compared it to “biting into a Sour Patch”.

Then comes the Oregogne Pinot (“My workhorse”), then the O.P.P. (Other People’s Pinot) and the story of its origin. He gives details on the source of the barrels and the location of the vineyard used, and how he had the grapes picked early to get less sugar.

He ends with the “Horsehoes and Hand Grenades,” a Shiraz/Cabernet/Merlot blend that he says “shows my creativity as a winemaker. The name is about creating your own luck and blowing up.” It’s a throwaway line and he knows it, but it’s effective.

In all the stories, Mack is laying out his narrative – that his image as one of only a handful of black trendsetters in the wine business may get him press attention, he is really a serious craftsman who has prepared himself, and his wines, for success. He knows he’s going to be the only Black person in this room –until maybe the next time he comes — and the whole package throws people. Most times in a good way. Sometimes not.

And after much more drinking around the table than spitting, he finishes to rousing applause –for the wine and the burst of energy.

The merchants are asked how important Andre’s stories are to selling the wine.

“Hugely important”, says Vincenzo Guglietta, the sales manager at Banville.  “Andre tells a compelling story. Let’s face it, there are whole lot of wines out there, and we have to make a convincing argument to wine buyers. Without a story — it’s just juice.”

For the rest of the day, and for the next several weeks, Mack will tell his story again and again —at a food industry incubator in the afternoon, at the launch that evening of eBay Wine, a new venture he will be contributing to, a TV show taping at his house on the weekend, then tastings in Boston, dinners in Milwaukee, more distributors in Kentucky, then a few days in Texas.

It’s a grueling schedule, but as Mack sees it, more fuel for the story, “At some point, Robert Mondavi was walking from store to store carrying bottles in a bag too.”

And though he enjoys a host of supporters who hold him up, there is no paid staff, no marketers.  The wines are about his singular taste, a singular vision. So much so that he also designs the stark black and white labels that have to vie for attention in world where many drinkers judge wine by their covers. “I wasn’t able to convey what I wanted to other designers, so I taught myself.”

“For now it’s just me” says Mack. “That may change, and I don’t know how long I can keep doing this. But for now I’m the best person to tell my story and the story of the wine, and so far it’s working.”

It’s a good story. Wine steward at The Palm in San Antonio. Winner of the Best Young Sommelier competition and the first African American to do so. Recruited by chef Thomas Keller to head the wine program at the 4-star French Laundry in Napa, then New York’s Per Se, where the wine list can climb to $24,000 a bottle. Then a calling to strike out on his own, a risky move out of a safe gig, self-training, self-doubt, mistakes.

But in just under 12 years, Mouton Noir (French for “Black Sheep”) has grown from 36 cases shipped in its first year to more than 33,000 cases shipped in 2016. That translates to 396,000 bottles and 550 tons of grapes culled from select vineyards in the Oregon Valley region. It puts Mouton Noir at the very high end of the small winery business, a category in which most wineries sell less than 2,000 cases per year.

Mack is also selling a lifestyle, a concept of fun and approachability backed by disarming quality that carries through from his personal style to the names of the wines to the t-shirts that help build the brand. “I’m trying to create something that is not just a wine company, but an experience. Something you can remember after the wine is finished.”

A husband and father of three boys, Mack says what he’s really doing –the hard work, the schedule, the hustle —is building a family business. “My children taste my wine. I want them to know what I do and where it comes from. They travel with me to the vineyards, touch the grapes, walk the farms. That’s what it’s all about.”

“This is what I want to be remembered for. This is my legacy.”