Fifty years after the founding of the Black Panther Party for Self Defense, the agenda and style of the legendary Black revolutionary organization remains relevant in today’s public discourse. An end to “police brutality and the murder of Black people,” central to the Black Lives Matter movement, was laid out in the Black Panthers’ 10-Point Platform five decades ago. Both acclaim and condemnation erupted when their iconic black berets made an appearance recently in Beyoncé’s half-time show performance during the Super Bowl.

It’s telling that America is still grappling with many of the same racial inequities and injustices that it did 50 years ago – and that Black pride remains a controversial topic. Not so to renowned scholar, activist and feminist icon and close associate of the Black Panthers Angela Y. Davis.

“If one looks at the 10-point program of the Black Panther Party, one sees that the very same issues that were raised in the aftermath of slavery are at the center of a program that was formulated in 1966,” said Davis, now a professor emeritus at University of California, Santa Cruz. “In 2008 when Barack Obama was elected, those issues had not been sufficiently addressed, certainly not yet solved, so therefore the election of one person to political office was not going to automatically reverse a history of a racist inspired economic oppression, which isn’t to say that it wasn’t important that we elected Barack Obama, but those struggles continue.”

While in Spain last week advocating for the release of imprisoned Basque separatist politician Arnaldo Otegi, Davis took a few moments with EBONY.com to discuss contemporary issues like Black Lives Matter, the 2016 U.S. presidential election, and details from her latest book, Freedom is a Constant Struggle: Ferguson, Palestine, and the Foundations of a Movement (Haymarket Books, 2016), edited by human rights activist Frank Barat.

“I’ve been involved in the Palestine Solidarity movement for a very long time,” explained Davis. “When the Ferguson uprising happened a year and a half ago activists on the ground in occupied Palestine were the first to tweet support and advice to protesters in Ferguson. Out of that has come a very interesting, a very rich development of connections across the ocean. A delegation from Palestine visited Ferguson. Black Lives Matter and Ferguson activists, [as well as members of] Dream Defenders, Black Youth Project 100 made a trip to Palestine over about a year ago to express their solidarity.”

More highlights of what Davis said are in the Q&A below. 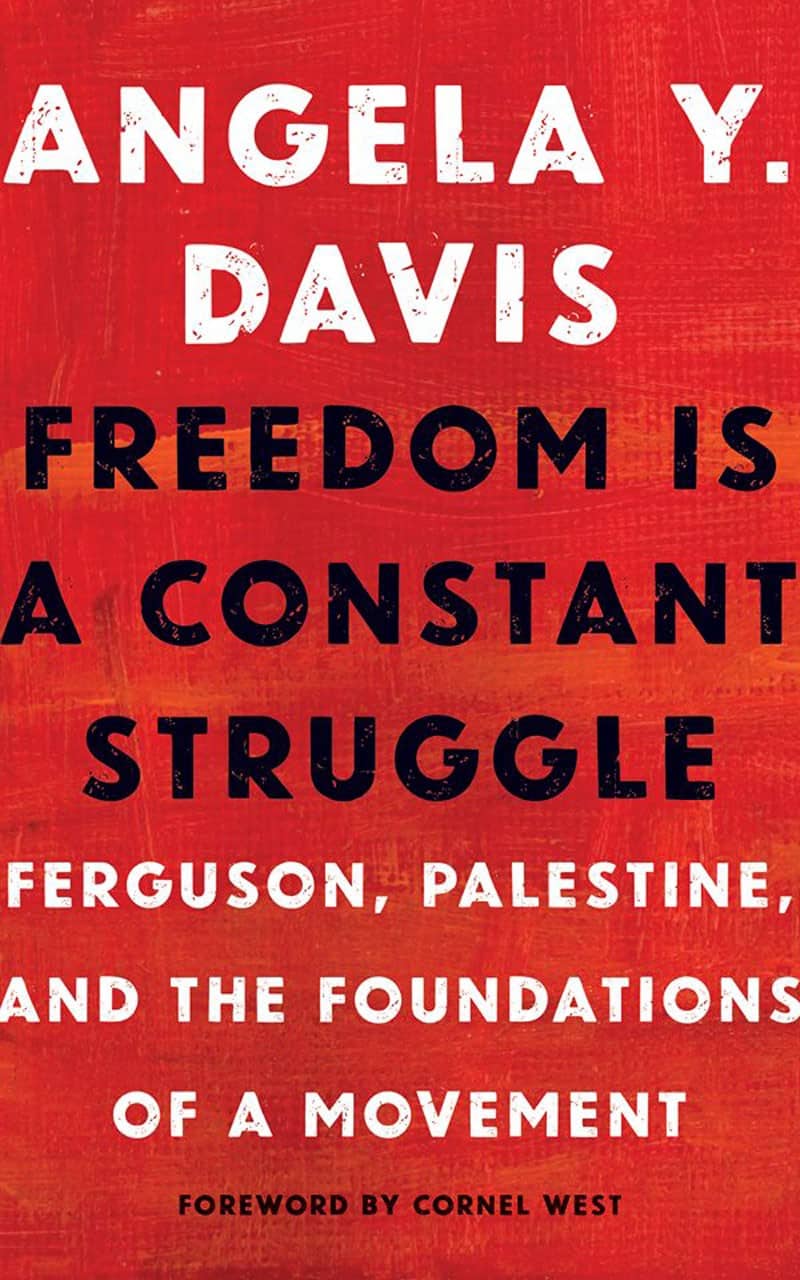 EBONY.COM: What’s the message of your new book?

Angela Davis: I am particularly interested in [having] activists associated with the Black freedom movement to realize that our struggles never would have achieved this universality that they have achieved without solidarity that has come from Africa, Asia, Latin America, Europe and Australia. Our struggles are global, therefore, it is important for us to incorporate this global vision into our on the ground battles against police crimes and the prison industrial complex. Since I was very young I have been involved in organizations— the Communist Party, the Black Panther Party— that have had this global perspective.

EBONY.COM: As you note in your book, events in Ferguson after the police shooting of Michael Brown exposed the militarization of police forces. Where is this push toward militarization headed and how can it be stopped?

Davis: If one looks at the history of policing, especially over the last 15 years in the aftermath of 9/11, one can see the emphasis on the shifting of resources from the military to the police. This actually has a much longer history if one looks at the way in which the Vietnam War resulted in an impact on local police. The S.W.A.T. squads emerged as a result of using techniques and technology that were used by the Green Berets in the Vietnam War. The Los Angeles Police Department was the first to use such tactics against the Black Panther Party. We have also seen the emergence of privatized policing corporations. In the book, I refer to G4S (Group 4 Security), which is a private security corporation that has spread policing and prisons all over the world. It’s important not only to look at the ways in which these moments of inflicting terror have been taken up by police departments, but it’s also essential to look at the economic dimension by such processes. G4S, of course, is the third largest corporation in the world, and it is the largest employer on the continent of Africa. It is connected, historically, with the privatization of prisons in the U.S. and in other places.

I would like to point out that corporations such as G4S have already recognized what feminists call intersectionality. G4S spans from private policing to the transportation of immigrants to private prisons to the deportation of people from Mexico in the U.S. to the Mexican border, the deportation of Africans from Europe to countries in Africa. I think [G4S has] also taken up the question of sexual abuse of women and so they have these agencies that address women at risk and women who have suffered from sexual assault.

EBONY.COM: You talk about how the foundations that have already been laid can enable today’s mass movements to be effective. However, many of today’s millennial-led activist groups actually reject traditional organization structures, so how can those foundations enable them to create effective change?

One has seen the rise of many women in leadership. Of course, there are the three women who created Black Lives Matter— Patrisse Cullors, Opal Tometi and Alicia Garza— who have raised many interesting questions about what it means to build leadership. In Black Youth Project 100 there is Charlene Carruthers who is a powerful spokesperson but she always makes it clear that she is a spokesperson for a collective. In the Dream Defenders, they are challenging hetero-patriarchal forms. They are questioning the impact of sexism and homophobia and all of these ideologies on their generation.

To people of my generation, their processes often seem unfamiliar, but of course, the Civil Rights Movement developed differently from movements before that. The movements of the 1930s that were led largely by Black communists (the history of which has been erased precisely because of anti-Communism) challenged the leadership that had come before it, so this is a process that happens. It’s very exciting to witness what may come of this current moment.

EBONY.COM: What do you think of Campaign Zero activist Deray McKesson running for mayor of Baltimore?

Davis: [The aforementioned groups] have had an impact on the way the national elections are conducted and evoked criticisms about how the candidates have not addressed questions of racism and the way in which the police continue to brutalize people and communities of color. Activism has to happen in all arenas including the electoral arena. It is not productive to assume that everything points in the direction of electoral politics. But certainly, it is important to have individuals who have progressive experiences or experience within radical movements to be elected.

EBONY.COM: Is there a particular candidate you’re supporting in this presidential election?

Davis: My approach has always been to emphasize independent, more radical politics, but I do think that it is important that Bernie Sanders has been raising issues that otherwise never would have been taken up within the context of the campaign between the two major parties.

It’s absolutely essential to raise the issues of decommodification of education and [the need for] free education. And of course, he is calling for tuition-free education at our public universities, which incidentally have a history of no tuition. [They] are now as privatized as the private universities. The history for the call for public education in relation to the Black freedom struggle holds important lessons. Former slaves called for free public education in the South, thus creating the context for poor, White students to get an education.

Of course, there is the healthcare question. I absolutely agree that we need free, single-payer healthcare. Then there are larger questions about the prison industrial complex that have not been sufficiently raised. We not only need to bring about an end to mass incarceration, we need to question the racism that is embedded in the whole history of punishment in this country.