When Beyoncé released her ‘surprise’ self-titled album late last year, cameos from artists such as Drake, Frank Ocean and her husband, Jay Z, were upstaged by someone unknown to many members of the “Bey Hive.” An excerpt of Nigerian author Chimamanda Ngozi Adichie’s powerful TEDx talk titled “Why We Should All Be Feminists” can be heard on “Flawless,” as the song previously released as “Bow Down” is reimagined as a thorough read of the gender police: We teach girls to shrink themselves, to make themselves smaller. We say to girls, You can have ambition, but not too much. You should aim to be successful but not too successful, otherwise you will threaten the man … We raise girls to see each other as competitors not for jobs or for accomplishments … but for the attention of men … The author ended her speech with her definition of a feminist: A person who believes in the economic, social and political equality of the sexes.

Bey is hardly the first Black female megastar to make a boldly feminist move. There is the sexual autonomy Janet Jackson inherited from Blues godmothers Bessie Smith and Ma Rainey, the fierce folk tunes of Odetta and rock goddesses Betty Davis and Grace Jones, which are not to be dismissed. Beyoncé’s public engagement of the word “feminism” sparked a rapid-fire discussion on social media platforms, continuing a dynamic dialogue that has been bubbling up on Twitter and Facebook.

Gone are the days in which feminism is easily dismissed as the territory of privileged White women or limited largely to those who live in academic and activist circles. There is an emergence of boldly Black feminist thought spreading via big and small screens, from the whip-smart progressive voices of pundits such as MSNBC’s Joy Reid and Goldie Taylor and CNN’s Marc Lamont Hill to the blogosphere. “Black Twitter” is routinely buzzing with debates that go beyond the trite Mars/Venus politicking and instead finds women and men engaged in deep conversations about how gender impacts equality, access and freedom. Is feminism simply the latest hot topic, or are we witnessing the beginning of a new Black liberation movement?

“I think Black feminism is in one of the strongest moments it has seen in a while,” says Brittney Cooper, assistant professor in the Department of Women’s and Gender Studies at Rutgers University. “From Melissa Harris-Perry on MSNBC, to Laverne Cox on Orange Is the New Black to Beyoncé … we have prominent Black women identifying publicly with the term. There is also a robust crop of young Black feminists online who keep pushing the conversation forward, doing activist work in communities and generally taking no prisoners when it comes to racism and sexism.”

Black women and men have engaged in feminist work for centuries. Abolitionist Maria Stewart’s 1832 speech “Why Sit Ye Here and Die?” denounced the lack of access to education and employment afforded to even free Black women. In 1892, pioneering scholar Anna Julia Cooper published A Voice from the South, one of the first texts to thoroughly examine the ways in which Black women are subject to unique forms of discrimination and oppression based on race and gender. W.E.B. Du Bois’ The Damnation of Women, published in 1920, makes a case for the improvement of living conditions for Black women and is considered one of the first Black male feminist writings.

To speak the names of the Black women—and men—who have done critical feminist work, regardless of whether they ever embraced feminist as a moniker, would require half the pages of this magazine: Sojourner Truth, Angela Davis, Audre Lorde, bell hooks, Beverly Guy-Sheftall, Alice Walker (who coined the term “womanism” to speak specifically to the contributions of Black women to feminist work), Rebecca Walker, Patricia Hill Collins, Toni Morrison, and the list goes on. (Visit EBONY.com for “100 Black Feminists You Should Know.”)

Although Beyoncé has certainly captured our attention, it would be absurd to consider her a leader of a movement. She’s a student, an admittedly new one at that, and she’s also not above feminist criticism. Adichie has declined comment on her voice being used by the pop star, so one may wonder just how she feels about Beyoncé’s brand of feminism (and Jay Z’s controversial “eat the cake, Anna Mae” bar reveals that there’s certainly room for some critical feminist discourse in the Carter household, to say the least). Yet she serves as a valuable entry point to discussions of feminism for people of all ages.

Between Race and Gender

Conversations about Black feminism are often charged with first establishing the unique space in which Black women exist: subject to both sexism and racism (and that’s without mentioning classism, homophobia, ableism and any other number of ways in which a Black woman can be “othered” by society), yet largely marginalized by White women and Black men when those issues are being addressed. Racial privilege allows White women increased ability to challenge gender-based oppression while still maintaining access and freedoms that women of color are routinely denied.

Scholars and famed writers are important to the shaping of our unique perspective on contemporary feminism, but the experience of women who have feminist values are just as, if not more, influential. “My grandmother was a very strong influence in my life,” says Chicago-based writer Mikki Kendall. “And though she was never explicitly feminist, she absolutely believed that women could be anything they wanted to be if they tried hard enough.”

Cooper credits the influence of grad school professors in helping her to both embrace feminism and recognize where she was first exposed to it: “They were … the first folks to make the argument that the homespun wisdom I learned from my mother and grandmother had not only personal but also intellectual and political relevance.”

While few would argue that feminism has been embraced by the Black community en masse—the increased representation in pop culture and perhaps overindexing of Black feminists online do not a feminist nation make—the level of conversation around gender issues today certainly suggests that much of the distaste for feminism born in years past has faded. “It’s hard to even imagine where you can go now in the Black world and say ‘feminism’ and have it be met with violence, scrutiny and hostility and anger,” she says.

Although there are still some who hold tight to the notion that feminism is for White women, we are witnessing increased understanding of intersectional feminist values and politics in contemporary media. Kimberlé Williams Crenshaw, professor at the UCLA School of Law and Columbia Law School and a prominent figure in the study of critical race theory, shaped the language and theory of intersectionality “to capture the reality of the way we experience racial discrimination and gender discrimination.”

“Sexism isn’t a one-size-fits-all phenomenon,” says Crenshaw. “It doesn’t happen to Black and White women the same way.” She says the ways “that Black women and girls experience discrimination is often framed as secondary or collateral to what’s happening, or downstream to what’s happening for men and boys, and that’s significant because it creates the belief and expectation that the way to handle the crisis facing Black women and girls is first, fix what’s happening with men,” she concludes. “Well, in reality, we’re interdependent.”

Author-turned-scholar Joan Morgan, whose groundbreaking 1999 book When Chickenheads Come Home to Roost defined “hip-hop feminism,” praises social media for enabling young women to connect with thought leaders around issues of gender. “[Social media] allows women to get access to women [such as] bell hooks and even me, without a classroom. It enables feminism to meet them where they are and where they live, which is actually where I think they should be getting it.”

An outspoken group of young Black feminist writers have also been able to galvanize readers across the world with their ruminations about the intersection of race and gender. There are a number of popular feminist sites that are helmed by Black women, such as Cooper’s Feminist Collective (crunkfeministcollective.com) and For Harriet (forharriet.com), or that feature the work of Black writers and editors, including The Feminist Wire (thefeministwire.com), Feministing (feministing.com) and Jezebel (jezebel.com). Online publications such as the Grio (thegrio.com), the Root (theroot.com) and our own Ebony.com, routinely highlight the work of Black feminist scribes of diverse backgrounds.

Among them is Kendall, who has created a number of popular Twitter trending topics, including #fasttailedgirls and #solidarityisforwhitewomen, which garnered nearly 7 million online impressions.

“I like hashtags as a tool for making conversations happen with an easy to find and follow topic reminder,” she says. “#Solidarityisforwhitewomen [was] a reaction to an ongoing problem with racism in feminism, and it quickly morphed from addressing the problems on display that day into addressing the problem as a whole. With #fasttailedgirls, I wanted to start a conversation about double standards and the way young Black girls are sexualized without their consent.”

Trudy, 34, whose blog, Gradient Lair, is known for razor-sharp cultural commentary, recognizes the web as a powerful part of the feminist toolbox. “While social media cannot unravel the most persistent hierarchies that oppression maintains,” she says, “it does allow small voices to gain traction … We’ve created important conversations and content and have altered the shape of modern social justice by letting people know that small voices still matter.”

[READ THE REST IN THE MARCH 2014 ISSUE OF EBONY, ON NEWSSTANDS NOW!] 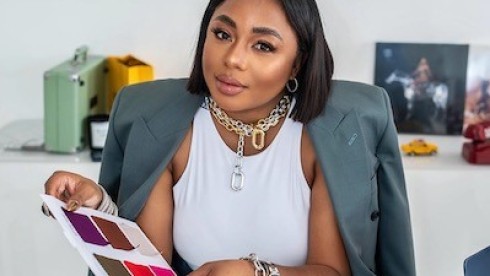