One of the most memorable quotes of Captain America: Civil War came from a character who only makes a very short appearance. It was authoritatively said by a member of the Dora Milaje, Black Panther’s elite squad of women bodyguards, to Black Widow (played by Scarlett Johansson).

The brief scene isn’t key to the plot, but it’s one of the Blackest moments you’ll ever see in a Marvel Comics film: a stunningly beautiful Black woman (played by actress Florence Kasumba), slaying in heels and a tight dress, confidently ready to kill at a moment’s notice. We don’t even see X-Men character Storm portrayed that powerfully, but here we have a Black woman maximizing a moment to show that she can’t be messed with. The scene is only part of the surprisingly fulfilling Black experience the film offers us — largely thanks to Black Panther and his central role in the film’s story.

The trailers for the movie looked promising. The visual of Captain America and the Winter Soldier tag teaming against Iron Man, punching him from either side while trading swings with Cap’s iconic shield, was quite the sight early on. Spider-Man popping up in one of the later trailers was a pleasant surprise. And with Captain America: Winter Soldier easily becoming my favorite Marvel Comics film upon its 2014 release, I didn’t think the third installment of the trilogy would let me down with its storyline.

But I was only mildly excited about T’Challa. He’s an incredible superhero, but can you blame me for being skeptical? Black people don’t get their fair shake when it comes to comic books, and even less in their accompanying films. Wesley Snipes nailed his portrayal as a sword-wielding vampire slayer in the Blade trilogy, but that’s about where it ends. Anthony Mackie’s Falcon from the previous Marvel films wasn’t particularly impressive, and even though Samuel L. Jackson has done well as Nick Fury, his roles in the films have been fairly limited.

I was more confident in Ta-Nehisi Coates’ portrayal of T’Challa than I was in Civil War. I thought that with Coates’ lack of experience writing comics, that he would provide a fresh perspective that other comic and film writers would be unable to provide. But when it comes to Black excellence, the film essentially picked up where Coates’ Black Panther #1 left off.

Not enough can be said about Chad Boseman’s T’Challa, who was the highlight of the film. He was ferocious: he held his own while sparring against Captain America, he breathlessly chased down the Winter Soldier in a car tunnel, his vibranium claws scratched marks into Cap’s normally impenetrable shield, he fearlessly stared down a helicopter shooting bullets at him, and he showcased a distinctive, cat-influenced fighting style that stood out from the other characters. In the comics, Black Panther’s coming out party was a takedown of The Fantastic Four; his film debut isn’t much different, with an emphasis on showing that he’s ready to hang with the big dogs. 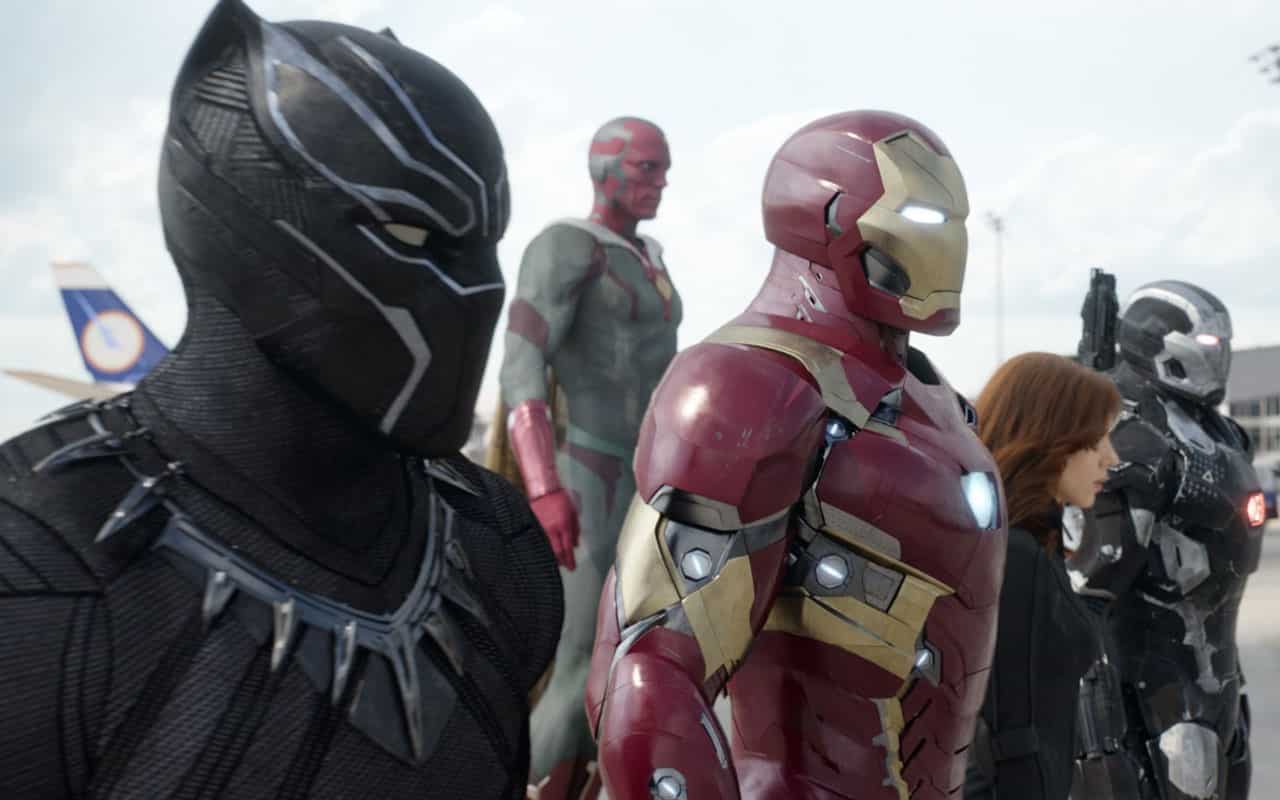 But T’Challa’s fighting wasn’t the only highlight of his performance. Boseman nailed his Wakandan accent, he maintained a cool, unshakeable poise throughout the film, and he had great one-liners (“As both warrior and king, how long do you think can you save your friend from me,” he asks Captain America, from the backseat of a police car). By pairing loyalty to family and country with a penchant to step outside of those lines to handle his business, he captures both angles of the debate that comprises the film’s theme.

Maia “Crown” Williams, founder of Midwest Ethnic Convention for Comics and Arts (MECCAcon), says she was also impressed by how well T’Challa was dressed in all of his scenes.

“He was kicking Winter Soldier’s a** when he had tailored pants and a sweater on. He was looking nice the entire film, and that’s also important. I need my people to be represented correctly,” Williams says. “They always make sure Tony Stark is laid out, so make sure T’Challa is dressed right. It’s important to me, how we’re represented in films. It’s important for my son to see that.”

“…I’d rather not be in a film at all, than to be added as a token. Along with representation, I’m happy that he was accurately portrayed,” Williams continues. “I’m happy that they took it seriously. I’m happy that they didn’t just rush, and make him look like an add-in. He was actually the star, depending on who you talk to.”

T’Challa stood his own against all of the other characters in the film in battle, and his Blackness wasn’t just a coincidence: it was an essential part of his identity in a franchise with strong, immoveable personalities. He stood out like a star player instead of standing out like a sore thumb.

That said, focusing on Boseman’s standout performance as T’Challa too much may make one miss another one of the movie’s astounding feats: three Black superheroes, all with important roles.

Mackie returns as Falcon, and he’s more than a sidekick this time around. He commands of the film’s coolest scenes when he uses his metal wings to deflect bullets while landing into battle, he uses stunning agility to dodge a missile from Vision, and his fighting has all around improved from previous films.

Don Cheadle could have had more screen time as War Machine, but Robinson points out that during the film’s most pivotal discussion, he and Mackie both present viable sides of the discussion. This time around, people of color literally have a seat at the table.

“If they were both in a barbershop getting a haircut, this would’ve hit home. That was almost like a barbershop conversation, arguing politics,” says Stacey Robinson, adjunct professor at University of Buffalo’s art department. “And they’re both on opposite sides of the debate, and both of them have really strong, valid points.” 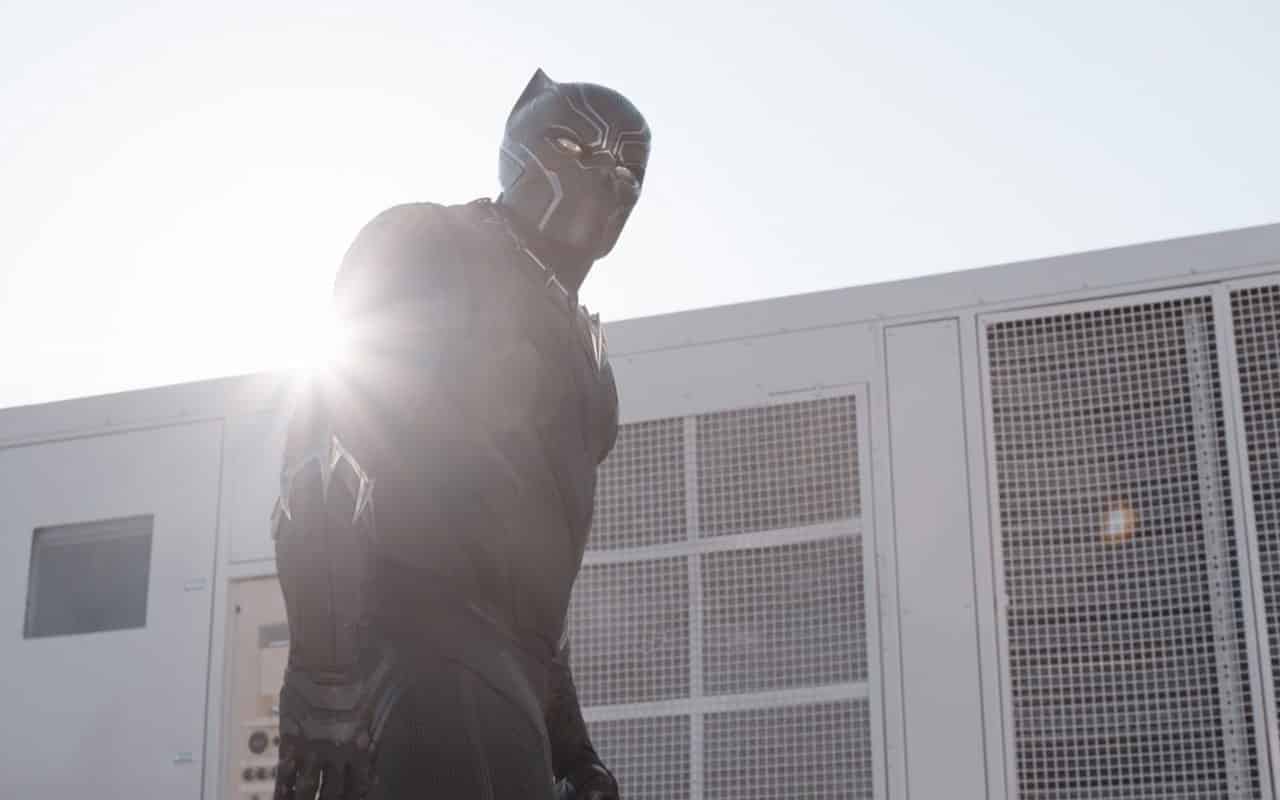 Robinson also saw instances of what he believes were moments of subvert political dialogue. When T’Challa makes a decision on vengeance, he said, “revenge has consumed you, and it is consuming them. I refuse to let it consume me.” Robinson maintains that was a defiant message from Black America to the rest of the country, saying that a wretched past and present racism that has killed our fathers – and mothers, brothers, daughters, sons, et al – wouldn’t make us become what we hate.

“We’re at a point where we’re seeing Black death on television like it’s reality TV. There’s still a public spectacle of Black death where there’s no justice,” Robinson says. “When Black Panther said, ‘vengeance has consumed you, I won’t let it consume me,’ I thought that was a type of dialogue from us to White America, that the writers could not actually say to their White audience.”

Whether that was covert messaging or not, Captain America: Civil War leaves an impression. With the expertise shown on and off the battlefield, it showcases a Blackness we’ve never seen in comic book movies before. There’s definitely still work to do; even though there are three Black superheroes, we still haven’t gotten strong Black women superheroes. Hopefully Creed and Fruitvale Station director Ryan Coogler showcases the Dora Milaje bodyguards in more detail when he directs the Black Panther feature film, set to hit theaters in 2018. Williams hopes that the film is shot on location in Africa, so that locals and area schools and businesses can benefit. But Civil War is a great start; it shows that people of color don’t only have a place in the conversation, but that we can hold our own once we get in.

An earlier version of this story incorrectly noted the name of a person who was interviewed for it. The article has been corrected with the correct name: Stacey Robinson.