Comic book fans, rejoice! Marvel Comics’ iconic Black Panther superhero is making a comeback and with the polished prose of one of the most pre-eminent Black voices in our sociopolitical climate. Marvel pegged journalist and bestselling author Ta-Nehisi Coates and longtime artist Brian Stelfreeze to conceptualize the new Black Panther comic, and readers are beyond excited. Issue No. 1 of the new series has already presold 300,000 physical copies ahead of its release date, April 6. To give you an idea, Marvel says the only numbers comparable from their collection are Star Wars (at 1 million copies) and Secret Wars, which sold 500,000 copies after being advertised on every Marvel comic for months before its release.

When Black Panther first surfaced in 1966 in an issue of Fantastic Four, he was the comic book publisher’s first major Black character and the first Black superhero in mainstream American comics. His significance is so palpable, Stelfreeze refers to him as the Barack Obama of comics. 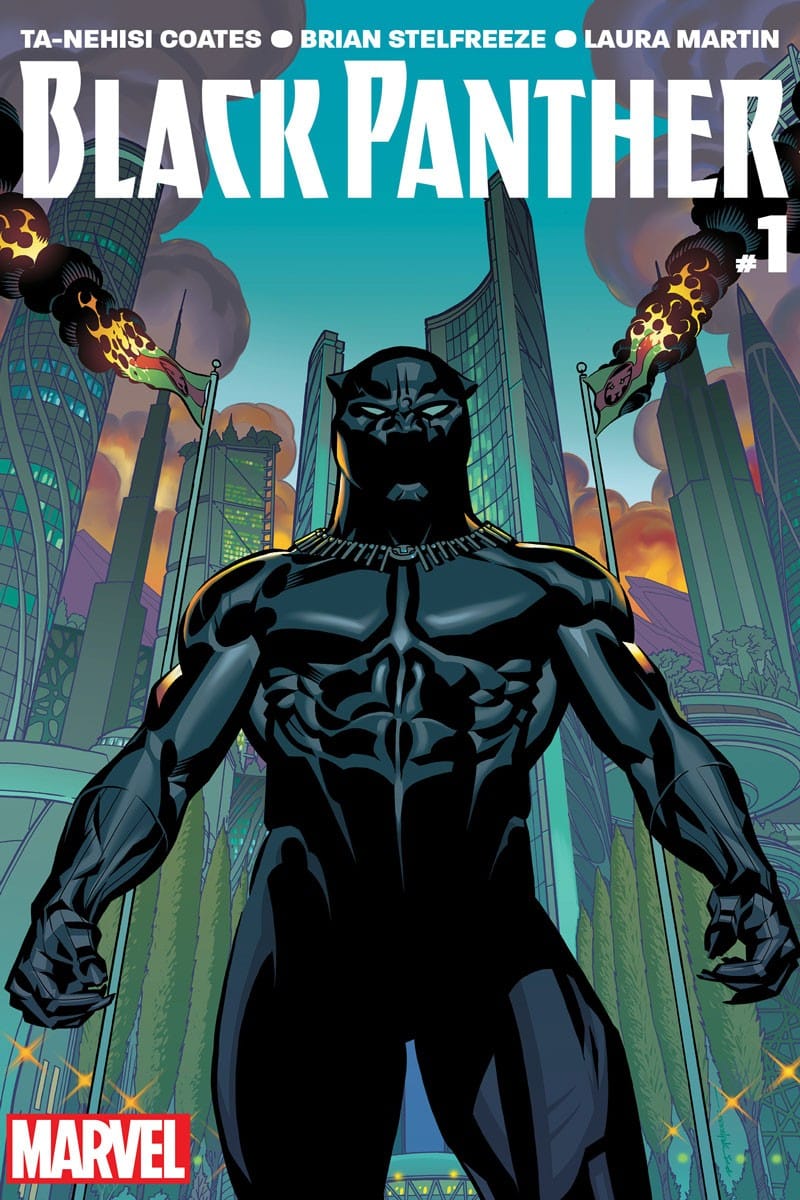 Like most superheroes, Black Panther’s powers are not earthly endowed. His enhanced abilities and senses are a result of ingesting a sacred heart-shaped herb, but perhaps more interesting than his extraordinary prowess is the character’s background story. The name, “Black Panther” is the title given to the king of a fictitious African country called Wakanda, which is the most technologically advanced country in the Marvel Universe because of a rare meteorite mineral found there called Vibranium. Plus, it’s the only country that hasn’t been colonized by European forces. T’Challa is the latest Panther and the main character of the comics while his father T’Chaka, the previous Panther, was killed by his arch-enemy, Klaw, the son of a Nazi war criminal who came to steal the Vibranium. T’Challa was a tactician, inventor, and the functional head of state of Wakanda before he gained his powers. He is a man of great influence who has the entire country’s wealth and army at his disposal.

“Imagine Eddie Murphy’s character from Coming to America as a superhero,” says artist and comics scholar John Jennings. “This dude has vast resources. He’s richer than Batman. Spider-Man can’t call an army to help him. This gentleman can actually overthrow a government because he’s a multibillionaire.”

Marvel Editor-in-Chief Axel Alonso wanted to relaunch a new Black Panther series to follow up the successful Secret Wars storyline. Alonso got the idea to ask Coates to pen the series after reading his interview with Marvel editor Sana Anamat for The Atlantic, where Coates revealed his affinity for comics.

“Given the themes he addresses in his book Between the World and Me, we thought he would be able to mine similar themes in Black Panther,” says Alonso. “The Black Panther is the first Black superhero, and Ta-Nehisi was going to tell an adventure story that would probably say something about the world in which we live in today. He’ll be the first to say, he’s not writing a political tract or a political polemic here. He’s writing a story, but you can be damn well certain that he’ll have something to say or he wouldn’t have stepped up for this in the first place.”

The company then pegged Stelfreeze, who has done dozens of Batman covers and interior design in other comics for Marvel and DC. Stelfreeze and Coates have established the kind of innate chemistry that Alonso believes only comes around perhaps once a decade. Comic book writers and illustrators need to be connected in a different way from other collaborators. It isn’t just a matter of the writer creating the story and the artist depicting what is on script. The two have to work together in alignment, every step of the way to tell a story that uses words and images but also fits into the frames on a page. The transition can be tough for writers who usually craft articles, films or novels. 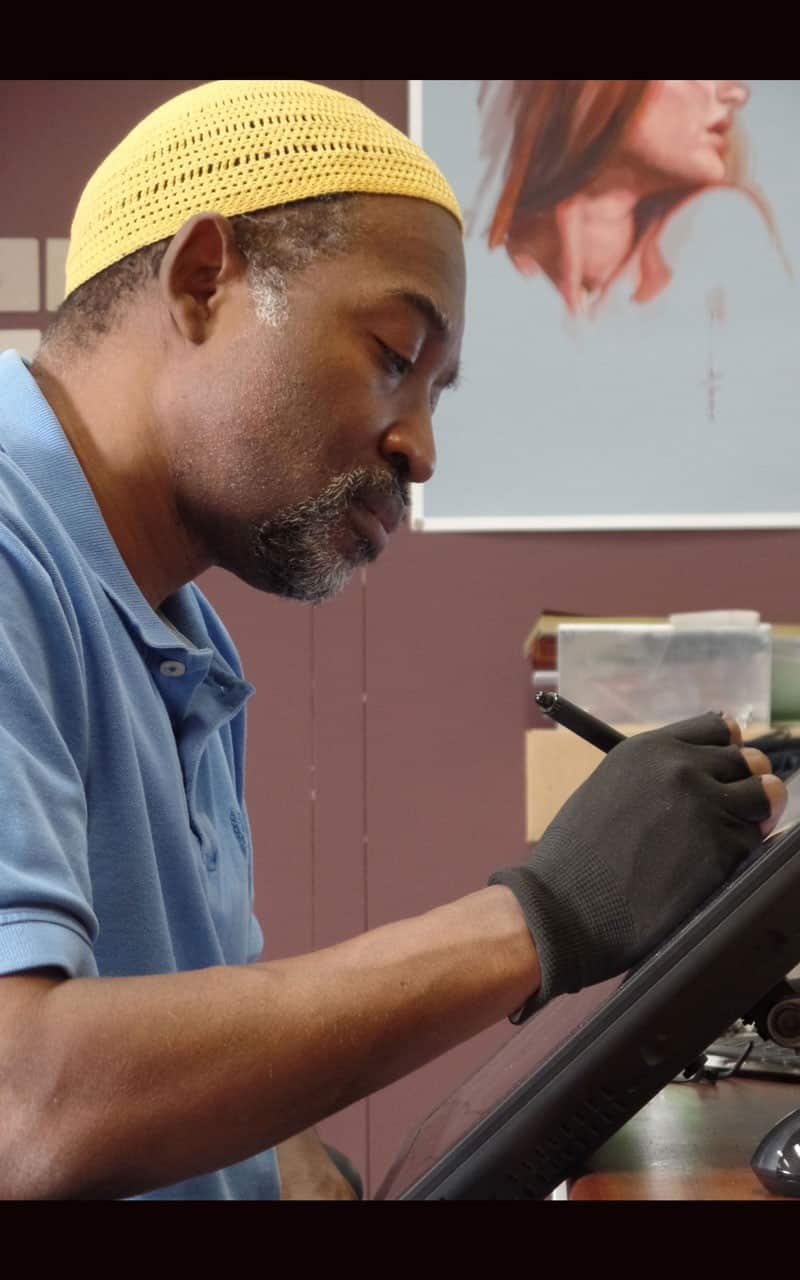 “Comics limits you to between 20 to 22 pages to get your story told, and you have to take your voice and see if you can really strip it down to the bare essentials,” explains Stelfreeze. “I was especially afraid of someone like Ta-Nehisi, who has such an amazingly, huge voice. I was afraid that voice wouldn’t fit in comics, but I was really surprised when we started receiving scripts and knew exactly what he was doing.”

Jennnings agrees that Coates is a great fit. He describes the New York Times bestselling author as a “borderline Afro-pessimist,” who will likely combine the melodrama of comics with the racial dynamics of current times.

“[Comics are] essentially soap operas. They’re continuing stories of daring that center around the performance of masculinity. Ta-Nehisi totally understands how power works in a particular way, probably a lot more than most people who are writing superhero comics,” says Jennings. “He has made a career of dissecting the fiction that is America. Our history is also a fiction, and because he has such a facility of doing that, he would be great to accurately depict what a space like this could look like. He could be an interesting author for a character who has so much potential and, to a certain degree, is totally untouched by any White supremacist thought.” 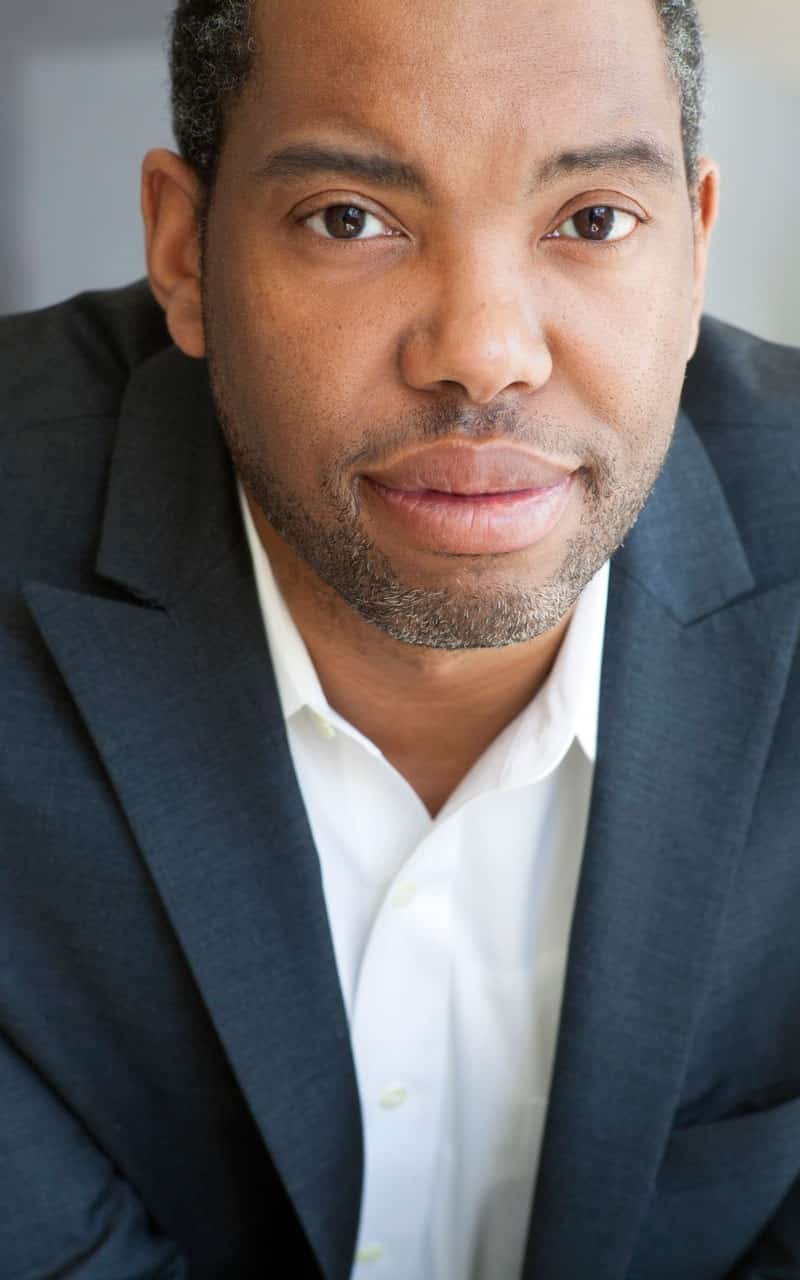 The “All New All Different Marvel” diversity push campaign has made a concerted effort to expand the company’s artists, writers and characters. Black Panther’s duo of a Black writer and artist is the latest, but there are several more to come. Spider-Man is now a biracial half-Black, half-Latino boy named Miles Morales. Greg Pak and Frank Cho’s Totally Awesome Hulk stars a Korean-American boy. Moon Girl and Devil Dinosaur stars a Black heroine. The main character of new Thor comics is a woman and African American artist Afua Richardson has been announced as the next illustrator behind Blade. Alonso says that while the new incarnations got backlash from comic aficionados early on, they continue to consistently sell well. “T’Challa is still the best, still the baddest,” he professes.

The new run of Black Panther has the potential to join the likes of Kendrick Lamar’s To Pimp A Butterfly, D’Angelo’s Black Messiah, Ava DuVernay’s Selma and Coates’ own Between the World and Me— part of the pantheon of timely works that encapsulate a timeline of police brutality, racialized violence, identity politics and the Civil Rights Movement that fueled them. Jennings describes Wakanda as a wealthy, technologically advanced land that has avoided European domination and mistreatment. A sort of “Black Utopia,” if you will and, as he points out, T’Challa isn’t just a character who happens to be Black— his Blackness and African heritage are essential parts of his story and identity.

The new comics, set to be released every month, are only the first reintroduction to Black Panther. T’Challa will also be featured in the upcoming movie Captain America: Civil War and next year, fans can look forward to seeing Black Panther in his own film, directed by Ryan Coogler (Creed, Fruitvale Station) and starring Chadwick Boseman (42, Get On Up.) The film is likely to follow the comic’s success, becoming a global sensation with the potential to spawn multiple sequels.

“Everyone who participates in society wants to see themselves portrayed this way,” says Jennings. “Think about what it means for someone who has traditionally been depicted as a stereotype, as evil, as not as important to then see themselves reflected as a king of an entire country. A man who is powerful, wonderful and finally the hero.”