[PASSPORT GOALS] Peace Out: Myanmar for Self Care, Spiritual Healing

I’m back in Bagan, a place in Central Myanmar (formerly Burma), that I’d fallen in love with on my first trip in 2013. Prior to 2012, tourism to Myanmar had been severely restricted because of the country’s political unrest. There were few ATMs, and even fewer hotels catering to American expectations. But how times have changed.

Myanmar was named Travel and Leisure’s “Top Destination of 2015,” and for good reason. The Burmese are kind, the country has gorgeous beaches, food to die for, culture that rivals the best of Asia, and temples that would make Cambodia’s Angor Wat green with envy. Myanmar hasn’t been overrun (yet) by tourists, so in many ways, a visit here is like taking a trip in a time capsule. There’s so much excitement about Cuba, but this is the place that should be on everyone’s bucket list.

I returned to Bagan because I’d found such a sense of peace, unlike anything I’d felt in the states, or quite frankly, unlike any other city I’d visited. This was due largely to the monks and their reverential place in Burmese society. In some ways, the monks are the rock stars of Myanmar, and they’re many in number. Monks are everywhere here: at bus stops, wandering around streets in Myanmar with an alms bowl, used to accumulate food given to them by villagers daily.

Because of their esteemed position in society, and a country that is 89% Buddhist, the relationship between the monks and the villagers is unique; it is more of a familial one than even just a neighborly one. Buddhists believe that good deeds elevate your karma, and the Burmese layperson displays an unwavering sense of service to the monks and monasteries. They show support in various ways from volunteering at the monastery, donating meals and supplies, or by sponsoring novice ceremonies, where a young boy is inducted as a novice (a young monk in training). I was awe struck; I’d never seen anything like it. 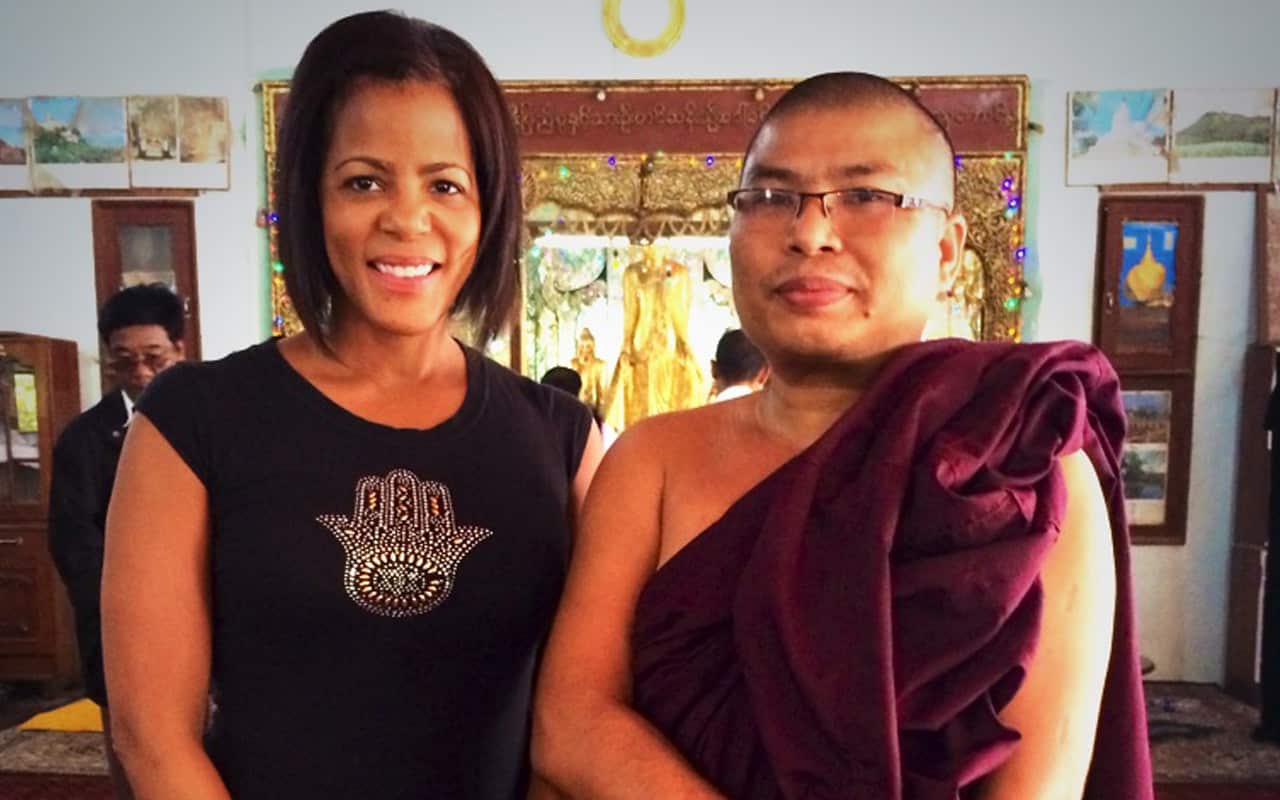 When I was here on holiday earlier, I sought to understand how, with minimal possessions (all can fit neatly into a foot locker), living off the kindness of villagers, and only one guaranteed meal per day, these monks could be so content. Wandering from my hotel in search of understanding, I stumbled upon the Lokananda Monastery, and my life was changed forever.  Ashin Sasana, a teacher at the monastery, the only monk of nearly 200 that spoke any English, was my personal guide over 2 days, showing me around and giving me insight into their daily lives. I felt like I’d experienced my own Nirvana— that “peace that surpasses human understanding” (cue my pastor’s voice). We became Facebook friends so I came back for a visit on my next trip to Asia.

Although anyone with an interest can stay at the monastery, there are no shortage of hotels, so I opted for the Areindemar Hotel, a lovely boutique hotel close to the monastery. Every morning, I walked there under the cover of darkness as their day begins around 4:30 a.m. with the chanting of the Dhamma by the master monk. The novices are busy preparing the monastery, either by sweeping the grounds or prepping the dining hall for their meals. The monks file into the dining hall in silence around 6:30 a.m. When these meals are funded and prepared by villagers, they often present them with staples such as pens, paper and toothbrushes during the procession.

Studying starts around 7:30 am. The students are grouped by the level of their learning; there are no grade levels in the Western sense. The younger novices study Pali language, the ancient Indian language of Buddhist scriptures, while the older study history, or a variety of other courses. The desire of any monk is to be schooled in all ways of the Buddha, so studying and chanting the Dhamma goes on most of the day.

During the afternoon, following quiet time, the monastery is buzzing with activity. Some villagers have time with the master monk, who reads the Dhamma as they sit rapt in attention, while other villagers bring supplies to the monastery. The younger novices have time with a master teacher learning the basics of Buddhism.

At 6 p.m., the monks file in for prayer to pay homage to the Buddha in Pali language. Buddhist prayers are different in meaning than traditional Christian prayers; they do not pray to the Buddha or beseech a lord for grace or favor. They pay homage to what the Buddha stands for, affirming their desire to be free from suffering, bad circumstances, and their quest towards Nirvana.

Now more than ever, with U.S. politicians spewing hatred and the threat of ISIS here and abroad, the lessons I learned at the monastery stayed with me. Through meditation and stillness, we can all find that sense of contentment we are looking for. Although you don’t have to travel to Myanmar to find it, this is an affordable respite for self care, and trust me on this, you’ll leave with memories (and photos) of a lifetime.

Lisa Bonner is a travel writer who daylights as an Entertainment Lawyer with offices in NYC. You can find her on social media @lisabonner