The Blaxploitation era of the 1970s gave the world an array of explosive films that include seminal features Shaft, Super Fly, Coffy and The Mack. However, there are many films made during that period that, for various reasons, are barely remembered even by fans of the genre. One of the more interesting in the kicked-to-the-curb canon is the little-known juvenile delinquent/family film Tough aka Johnny Tough. With its poster declaring, “He’s bad…he’s Black…he’s beautiful…and Tough! And that’s no jive,” the film was originally released in the summer of 1974. A favorite of director Quentin Tarantino, he screened his personal print at the Grindhouse Film Festival in 2007.

Tough was a departure from the usual Blaxploitation bad brothers and mad mamas. Director/writer Horace Jackson’s independent debut told the tale of a wild kid named Johnny coming of age on the not-so-mean streets of Los Angeles and the strife he dealt with on a regular. Three years prior, Jackson produced and scripted the low-budget film The Bus is Coming, but Tough was his first directed project.

Jackson was a handsome young man with a long face and a beard, who was determined to make it in Hollywood by any means necessary. With the film world rapidly changing in the ‘70s and Black directors crossing the threshold ever so slightly, Jackson, like Melvin Van Peebles before and Spike Lee after, did it himself. Filmed in a neo-realist style and shot in the Fairfax District, the director wasn’t as visually savvy as contemporaries Ossie Davis (Cotton Comes to Harlem) or Gordon Parks (Shaft), but being forced to work on a shoestring budget couldn’t have helped much either.

While Tough was rated G during a period when most Black films were restricted (R) because of sex and violence, in the first fifteen minutes the adorable Afro-wearing kid played by Dion Gossett steals a FOR SALE sign, which he later sticks in the lawn in front of his school, shoplifts cookies, and slowly drives his teacher crazy. Back home, after he’s caught telling yet another fib, Johnny’s mother (Sandra Reed) blurts, “Every time he opens his mouth, he’s telling a lie.” Of course, the prepubescent Johnny needed discipline badly, but Jackson’s script showed that the kid’s rebellion was caused by his constantly arguing middle-class parents and short-tempered teacher.

“All the adults in Johnny’s life were all screwed-up,” Renny Roker the actor who played Johnny’s stepfather Phil, says. A New York City native currently living in Palm Coast, Florida with his wife Linda, he is the author of Positivity Your Key to Success. In the 1970s, Roker was a character actor who appeared on Mission: Impossible and Mod Squad before tackling the daddy role in Tough. “Johnny was an intelligent young man, but he was also lonely and troubled because of his circumstances.”

In addition to being the only professional thespian in the film, Roker worked with Horace Jackson’s company, Jina Productions, as a (uncredited) co-producer on the feature. “The budget for Tough was between $250,000 and $300,000,” Roker says, “but during the middle of shooting, Jackson ran out of money and I was able to find some. I got some pretty strong people involved with us and eventually we had a movie.”

Whether deliberately biting or as a subconscious homage, Jackson sampled the plot and various scenes from the famed French film The 400 Blows with Johnny as a sepia-skinned version of Antoine Doinel and the action transported from bleak Paris to sunny Cali. “About a quarter of a way through the movie, I realized that I was watching a remake of my favorite François Truffaut’s film,” says Moon in Gutter movie blogger and Art Decades publisher Jeremy Richey.

A fan of Tough, he first saw it in 2008 while searching a torrent site for obscure Blaxploitation films. “I sat down and watched it thinking it was going to be a typical early ‘70s Blaxplotation film, but it’s really not.” Although Roker denies that Jackson used the 1959 masterwork as the springboard for Tough, in 2011 the Los Angeles theater Cinefamily screened the two films as a double feature; the program description read, “…Johnny Tough emerges not as a copycat film, but as a true genre gem.”

Stylistically, Tough seems divided between being an ABC Afternoon Special and a serious cinematic outing. Although Jackson obviously had the ambition to launch and complete the film, his lack of technical skills combined with the stiffness of most of the non-professional cast, stood in the way of Tough being a better picture. Still, although I saw the movie during its first-run, certain scenes, like Johnny’s encounter with a local gang and, later, spending the night in jail, stayed with me for years. Yet, for decades afterwards, I thought I had imagined Tough, because no one seemed to remember the movie existed.

For years I couldn’t find it on VHS or DVD until one night in 2013 when I found a copy selling for a buck. That night, I watched the horrible 700th generation public domain dub with its faded colors and bad sound, but was so caught-up in the rapture of nostalgia I excused the film’s faults. Though, as a fan of Blax-movie music, it bugged me that the Tough theme, credited to Dennis Coffey and the Soul Searchers (courtesy of Sussex Records), wasn’t as funky as most other (Curtis Mayfield) Blaxploitation music.

Coffey, a seasoned session guitarist known for the popular “Scorpio” break, is a respected sideman who has played on many Motown sessions, discovered Sixto “Sugar Man” Rodriguez and was also the composer of the dope title theme for Black Belt Jones, the Jim Kelly cult classic. In 2013, while interviewing Coffey from his home in Detroit, I inquired about the Tough theme and Coffey was puzzled.

“I have no idea what you’re talking about,” Coffey finally said. “I don’t remember the movie or song.” I wasn’t sure if Coffey was serious or just messing with me, but my theory was that somebody must’ve lost the track in a Hollywood poker game. “That song came to us through Clarence Avant who owned Sussex Records,” Renny Roker says. Sussex was Coffey’s former label and also where Bill Withers began. “Although we wound-up distributing the film ourselves, Clarence was a friend of the production.”

Secret Washington DC author Sharon Pendana remembers seeing Tough at the Town Theater during opening weekend, but the theme song was the last thing the young girls in the audience were thinking about. “As a child, I was enamored with the kid who played Johnny,” Pendana says. “I was sobbing at the end when I thought he might be hurt.”

New York based writer/editor Julia Chance also saw Tough in her hometown of Baltimore when she was thirteen. “I went with some girls from school to the Mayfair Theater,” Chance said. “I heard the ad on playing on WWIN, then I saw the Afro wearing kid in the poster. Besides the Jackson 5, there weren’t that many boys that looked like us in the pop culture; he was so cute.” 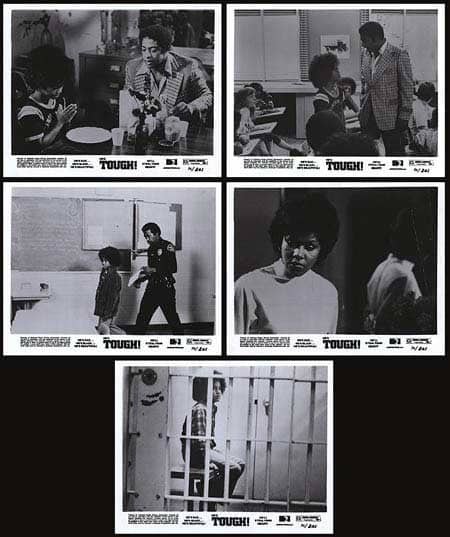 According to Roker, child actor Dion Gossett was chosen early in the casting process to play Johnny. “He he was so unique in the way that he looked. Horace decided early that he was going to be the one. I lost touch with Dion after the movie, but I was surprised that he didn’t do more work, because after Tough, the studios were calling for him.” Indeed, everyone associated with Tough, except Renny Roker, has disappeared into a B-movie Bermuda Triangle; publicity shy Jackson hasn’t been on the scene since his last film Deliver Us Evil in 1975.

“Horace was a very quiet, behind the scenes kind of guy,” explains Roker. “He didn’t like to be out in the open and he was also very religious. He was the kind of guy that just didn’t like a lot of public relations and all that kind of stuff. He just figured if he made a good movie, everybody is going to come. It was interesting; he was living in a fairy tale world in that regards. Not from a negative standpoint, because he was a wonderful, religious family man. He had a hell of a struggle getting to where he did. Nobody thought a Black producer could do a picture that wasn’t about drugs, shootings and pimps.”

After Tough was complete, Jackson, Roker and the actor’s young son Kelly, set-out on the road taking the film into various markets. “In Atlanta we opened at the Fox Theater, which is a 3,000 seat facility,” Rocker remembers. At the time, the Fox was on the verge of bankruptcy “It was the one of the largest theaters in the country, and we invited every high school football team, basketball team and baseball team in the city to a free screening. The guy that owned the theater told us we were crazy. He asked us, ‘How could you give away almost 3,000 tickets.’ He said, ‘Tomorrow, the theater will be empty, because they would’ve already seen the movie.’ Well, the next day there were lines around the block (based on word of mouth) and we sold out that theater for fourteen straight days.”

Four decades later, Tough might not be the best made or known Blaxploitation feature ever made, but it remains one of the most interesting films of the genre.