How One Contract Employee Brilliantly Attracted the Attention of Her CEO

As Valentine’s Day approaches every year, men and women all over the nation anxiously find themselves contemplating ways to reveal their true intentions to their crush.

And Chicago native and web developer, Shari Neal Williams found herself in that exact same situation, pondering how she could get the attention of her crush. But Shari’s dilemma was uniquely different in one important regard: she wasn’t crushing on a person that she wanted to date; she was crushing on a company that she wanted to work for as a full-time employee.

While folks openly emerged out of being secret admirers, Neal Williams crafted a website to let her company, Burrell Communications (with whom she is currently working on contract for), know how she felt about about turning their part-time relationship into something more serious. But she knew that in order to get the attention of her award-winning ad agency, she’d have to create something that was invention, fun, intriguing and exceptional.

With the aura of Valentine’s Day drifting in the air, Neal Williams decided to borrow from the playbook of online dating as the theme for her site, www.ShariLovesBurrell.com. Using Tinder references and Facebook relationship status posts on her eye-catching database, her ode to her love for Burrell was executed flawlessly.

“You know I kind of went into this feeling like, ‘OK I need to do something to get their attention.’ So I felt like anything less than getting a job out of it would be a failure,” Shari said in her interview with EBONY.com.

Immediately after launching her site, she not only captured the attention of her co-workers, but she also received kudos from Burrell’s CCO and CEOs.

“Everyone at the company loved it, the CCO and CEO are aware of it, everyone’s seen it,” Shari says. “The CCO, Lewis Williams, had reposted about my website on Linkedin and he said, ‘Shari we hear you loud and clear.’ I also ran into one of the CEOs, Fay Ferguson, in the hall and she was like, ‘We’ll see what we can do.’ 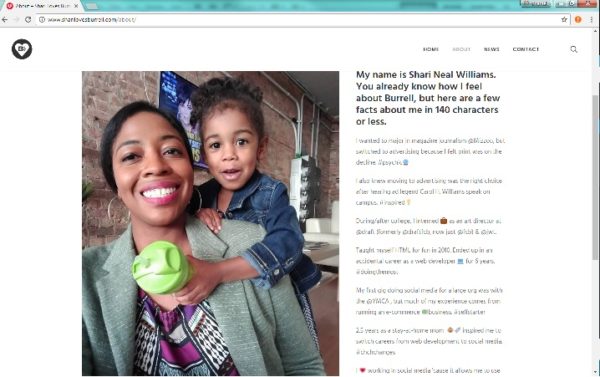 Although Shari has typically been able to find employment rather easily in the past, her journey over the past three years has been anything but a cakewalk.

“I was a web developer for six years and when I got pregnant, I decided I wasn’t going to go back after maternity leave. That led to the whole stay-at-home mom situation,” the mother of one reflects. “And I think during that time I was like, ‘You know I don’t wanna really do web development full time anymore. I’d like to transition into social media.’ So I was sending out a lot of resumes, maybe 5, 10 a day and I was getting responses, it just felt like it was taking a long time to kinda get things moving.

It should be stated that Neal Williams’ “crush” is not new in any form or fashion. In fact, she’s always been a huge fan of Burrell.

“I’ve always just been aware of Burrell. It’s kind of like a Chicago staple, especially if you’re in the advertising world,” she says. “I went to school for journalism and advertising, so I’ve always known of Tom Burrell so it’s just one of those things I’ve just kind of always known, about the agency and the work that they’ve done.”

One of the most prominent features on “Shari Loves Burrell” is the countdown clock revealing the remaining time left on her contract right down to the second. But what’s so interesting about it is that while it was created to inform Burrell of how much time is left before her contract lapses, it’s also serving as an indicator for other agencies who are looking to shoot their shot.

“I guess a byproduct of me putting it out there is that other agencies have come calling too,” Shari states.

Although she will do what’s best for her and her family, Neal Williams is consistently clear about one fact: Burrell is her #agencybae.

“My goal is to get a job at Burrell. I think if they want me to stay and offer me something, that’ll be the position I take.”