Can 'The Carmichael Show' Move the Cosby Scandal Conversation Forward?

The cast of "The Carmichael Show" participate in a panel at the NBCUniversal Winter TCA. Photo: AP
By #TeamEBONY  | March 11, 2016
Share

The cover of the November 2015 issue of EBONY magazine featured a shattered picture of the Huxtable family.  It was a cover that struck a chord across the country.  During one particular HuffPost Live interview EBONY senior editor Jamilah Lemieux explained that “the image of the Huxtables in the eyes of many people, has been shattered as a result of the allegations against Mr. Cosby.” 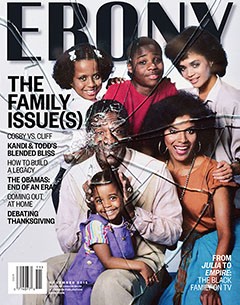 She continued, "This isn't a new conversation.  But this is a conversation that we felt, as a magazine, should lead, that we should lead and contribute to in a meaningful way."

Fast forward to this coming Sunday, March 13, when "The Carmichael Show" makes its season premiere.  What do the two have in common?  As the show, inspired by the life of comedian Jerrod Carmichael, makes its return for a second season of 13 brand new episodes – it will further continue the difficult conversation of where we stand together or divided on the topic of Bill Cosby and the allegations that have shook many people’s admiration for him to the core.

As for the cover, Jerrod definitely had an opinion. “Brilliant.””He said. “Removed from any view on the topic, as far as just a cover goes, brilliant. It’s jarring in a good way.  The way art is supposed to be subversive.”

He’s owed the same compliment because the premiere will follow the Carmichael family with such a realistic approach on how each member is managing their feelings about the Cos and the range of emotions portrayed are not unlike any Black American household today.  A brave move for NBC, the network which housed "The Cosby Show" for eight highly-rated seasons, in a bit of irony the episode tackles the issue in its own brilliant and shall we say a little subversive way itself – especially since it was written by the show’s creator, Jerrod Carmichael, who has yet to shy away from edgy topics.

“I thought it was important.  We can’t shy away from honest conversation.  And we can’t shy away from unpopular conversations to have on television.  I’m always beholden to the art over anything.  It wouldn’t be right and it would be so false if we just shied away from it.  If we ignored it and it’s this glaring topic that we’ve discussed with our families and our friends so I don’t think we had a choice.  We had to.  That’s how I felt.  We had to talk about it.”

The possibility that Bill Cosby will see the episode is high.  He, up until recent times, had been in conversations with Jerrod about his show.

“He’s called.  He’s given advice, given compliments and I think a lot of the episode is about the pain of what to do when someone that you look up to, someone America has looked up to goes through something so tragic or does something so tragic or however it’s phrased.  And what do you do with that?  What do you do with your own personal emotions?  So it’s rooted in a very real truth for me.  Yeah we’ve had contact before.”

Jerrod had a vision with the Cosby episode and aimed to tell a story.  But what of the other cast members? Were they apprehensive about tackling such a taboo topic?

“Not once we read the script.”  David Allen Grier revealed. “Because we knew where they were coming from.  Once we got the script we said ‘ok here’s the arena that we’re in and let’s go for it.”

Loretta Devine felt similarly. “From working the first season with Jerrod, he always plays everything right on the edge and in a very funny way, but it’s very serious what we’re talking about.  I think that’s what’s incredible about this show, is that it’s able to actually talk about the real problems and the real issues.”

Rel Howery, who play’s Jerrod’s TV brother Bobby said he thought he was joking when Jerrod revealed to him over brunch that he had decided to do a “Cosby” episode.  “That was one script I couldn’t wait to read.  We got it after the first episode we shot …so after you shoot they usually have the new scripts warm, fresh out of the presses,” he laughed.

“I sat there in my dressing room.  I didn’t even leave and read the whole script and was just like this is amazing.  Even now I get goose bumps I can’t wait for people to see it.  I just thought it was smart by everybody having an opinion.”

Tiffany Haddish, who plays the hilarious Nekeisha on the show hopes this episode will reach a younger audience that might not be as familiar with the Bill Cosby that played everyone’s beloved TV dad.  “It allows you to have a choice.  You get to decide what you want.  And it’s going to create such a conversation I feel like in the household that will inform the kids.  Because there’s kids that’s like seeing Bill Cosby and they don’t really understand.  They have no clue – they’re like ‘what’s the big deal, so what, he’s just a nasty black man?’ and I’m like ‘no honey yo mama went to college because she watched A Different World.”

Whatever way you slice it, similar to the November cover, the season premiere of The Carmichael Show, which will air Sunday, March 13 and 9:00 pm followed by another brand new episode, will act as a conduit in which to have or continue having the tough Cosby conversations.

When asked what Cosby will think about the episode Howery said, “I think he’s going to respect it.  This is why it’s such a touchy subject because he hasn’t said anything.  I feel like Jerrod is going to get a call.”

As for what Jerrod thinks Cosby will think after watching his Bill Cosby themed episode titled “Fallen Heroes?”  It all boils down to diplomacy. “What I try and do with every episode in trying to balance an argument, I think both a victim and Bill Cosby will be able to watch that episode and agree with some point of it and that was very important to me.”