At just 24, Chance the Rapper is wise beyond his years. The Chi-Town MC knows the secret to success, and it isn’t limited to simply being “blessed.”

See, Chancelor Bennett has a keen sense of self-awareness that most people his age—hell, the world does not possess. The Coloring Book musician doesn’t believe in forcing things. So when he ventured off to Hollywood in an effort to further his career, it was his intuition that served as his compass.

“There are a lot of spaces where you feel like God isn’t around,” Chance states of his brief time in L.A during an interview for EBONY with contributor Adrienne Samuels Gibbs. “I got some vibes. You have to listen and be aware of your discernment, and if somebody tells you to leave? Then get the f*** out of there. You’ll feel it … . You just have to listen to God.” 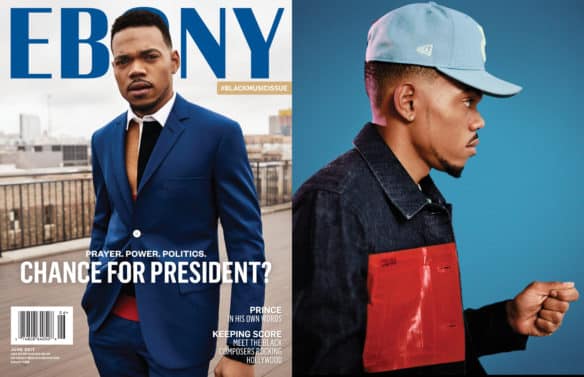 Judging by Chance the Rapper’s exponential success, anyone can see that discernment is his best kept secret. Achieve global fame and celebrity success? Check. Win three Grammys as an independent artist with absolutely no help whatsoever from record labels? Double check. Raise $2 million—excuse me, $2.2 million—for Chicago Public Schools after a very disappointing meeting with Illinois Gov. Bruce Rauner? Double check. Well …you get the point.

“The crisis is real,” says Westcott Elementary principal Monique Dockery, who heads the South Side school where Chance showed up to make his big donations. “The financial piece is huge, but then also it has shifted some people’s outlook on what students could actually do and be in using their own creative talents to move forward.”

This is Chance’s year. In fact, so much that people are actually calling for the “No Problems” rapper to run for public office.

“I would never run for any office or government position,” he says plainly after cracking a smile. “I’m not into it. I think politics is a reason why a lot of stuff doesn’t get done. There’s a lot of favors, and a lot of people are held back by their intentions of being re-elected or the things that they owe their party or constituents. I think when you’re in my position as an artist, I can say what I want and talk about the issues that matter.”

We would never steer anyone away from looking to the Creator for inspiration. But in those moments when you need a little inspiration in human form, in this case, you can certainly leave it up the Chance.

Check out our #BlackMusicIssue Apple Music Playlist curated by Chance the Rapper.

Read more of the exclusive article by Adrienne Samuels Gibbs in the June 2017 issue of EBONY magazine, on newsstands now! Click here to subscribe.