Twenty-sixteen was a rough year, and you would think that everyone would be up for leaving it and all of the BS behind. But unfortunately, a bit of whack news, not courtesy of Orlando Brown this time, and we aren’t even five days into 2017.

Anyway, Brown wasn’t feeling that so much and let Soulja Boy know.

The two then settled on a fight in the ring, date TBD.

But that ain’t all y’all. Chris Brown then posted the below comment, to which Karreuche responded. 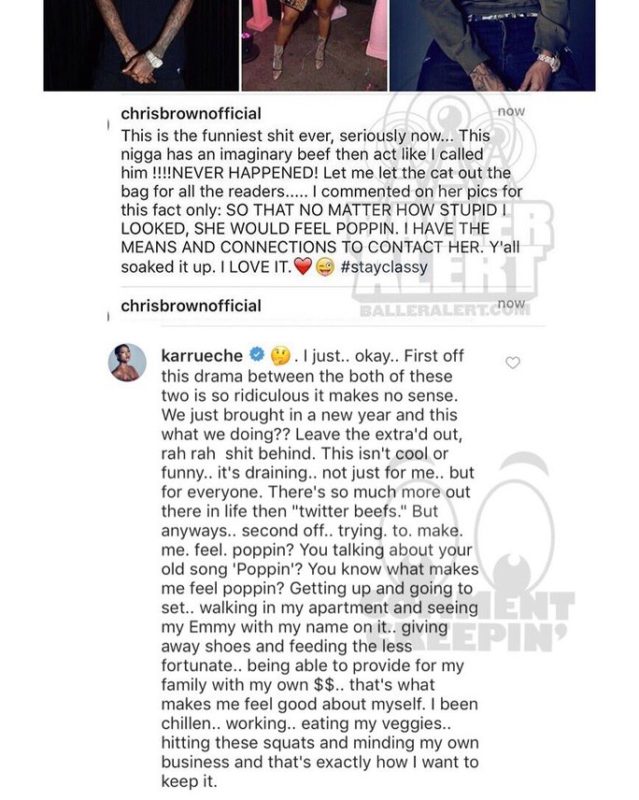 To which Chris replied… 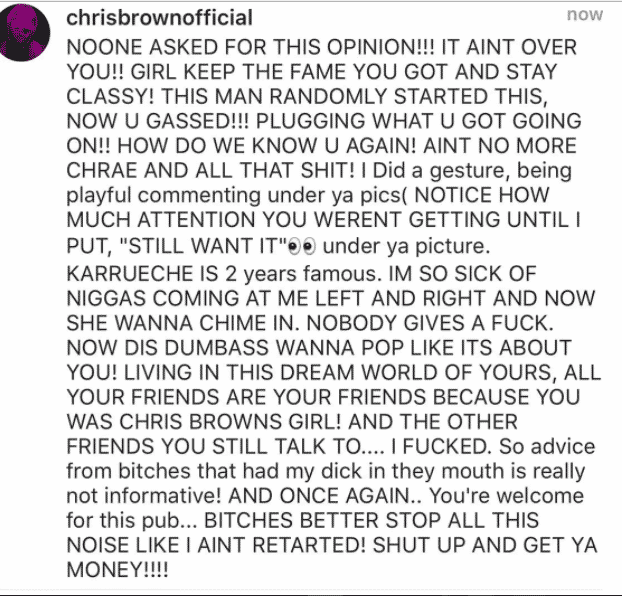 You’re right Chris, this isn’t over Karreuche; it’s about you and your ego.

I’m not going to spend too much time talking about the ridiculousness of two grown, wealthy Black men beefing about who is the #thuggier of the two on the Internet. Instead, I’d rather focus on how Chris Brown’s actions represent a disturbing notion: that some men actually think they own women.

Chris Brown and Soulja Boy beefing over Karreuche is a result of Brown’s notion that he is still in the equation. I don’t know for sure, but from the looks of things, Karreuche has moved on and ain’t about that life. Yet, Brown felt the need to post a comment on her Instagram so that she could feel “poppin,” whatever the hell that even means. But honestly, none of Chris Brown’s actions had anything to do with Karreuche and her happiness at all. In fact, it’s quite the opposite.

There are some men who have a hard time letting go of a woman, not just because she’s a good woman and they messed up, but because they did not make the decision to end the relationship. Their egos are bruised, and it is a clear indication of possessiveness, insecurity and the need to be relevant. These types of men—hell people for that matter—are primarily focused on attention more than re-establishing a genuine connection. And honestly, society has helped them arrive at this destination.

Women are constantly force-fed the ideology that we should be totally submissive to men. If we’re not preoccupied with “getting sexy” for him, we should be concerned with not coming off as “overly opinionated and aggressive.” Men have been placed in a position that allows them to assert their authority over just about everything in life, and relationships are no different. According to some, everything a woman does should be to “please her man.” God forbid she thinks for herself, decides to end the relationship and not need your compliments or attention to feel like she’s “poppin.”

Whether or not Brown still feels for Karreuche is debatable. I’m not going to dispute the possibility that he may genuinely care for the woman, because I’m not in the business of telling people how to feel. What I will say is that if Mr. Brown does still care for Karreuche, this isn’t the way to go about getting her back.

But from the looks of things, perhaps Chris should let Karreuche be and focus on that “New Flame” he sings about.