After two days of preliminary rounds of basketball action– and some modest partying and networking– the 71st Annual CIAA Basketball Tournament begins in earnest today when the league’s top two players take the court Thursday evening.

CIAA Player of the Year, Johnson C. Smith University’s 6’ 7” senior forward Stedmon Lemon, leads the league in scoring, averaging 21.5 points a game. His team faces Livingstone College in a 7 p.m. matchup. Right behind Lemon is Virginia Union’s 6’ 3” junior guard Ray Anderson, who averages 20.7 points and will lead his team in the 9 p.m. matchup against Shaw University.

Observers wonder if either of the two (or both) can become the next player from the Central Intercollegiate Athletic Association, one of the nation’s oldest athletic conferences, to make a splash in the NBA. All of this is happening in Charlotte, N.C., which is still feeling the excitement of its Cam Newton-quarterbacked team playing in the Super Bowl. Now, comes the weeklong festival of R&B, Hip Hop and basketball— the centerpiece of which is this five-day Division II conference showcase, which has featured some of the all-time greats.

The pioneers for Lemon and Anderson include Chicago Bulls forward Charles Oakley and four-time NBA defensive player of the year, Detroit Pistons forward Ben Wallace, both of Virginia Union; Baltimore Bullets and New York Knicks guard Earl “the Pearl Monroe” of Winston-Salem State; and Boston Celtics guard Sam Jones of North Carolina Central University. The latest CIAA star to shine in the NBA was Division II Player of the Year Ronald “Flip” Murray, who played at Shaw University from 2000 to 2002, and became a scoring machine mainly for the Milwaukee Bucks and Seattle Supersonics in a 12-year NBA career.

Another thing that makes the CIAA Tournament unique is that it is one of the few conferences whose men’s and women’s tournaments are played within the same week under the same roof. And at least for this year, the women’s star power will not be outdone by the men. CIAA Women’s Player of the Year, Virginia Union senior guard Kiana Johnson—  a transfer from Michigan State— is a dynamo who leads Division II in scoring, averaging 28 points a game, is second in assists (9.2) and third in steals (4.33). She is likely to be awarded player of the year in all of Division II. 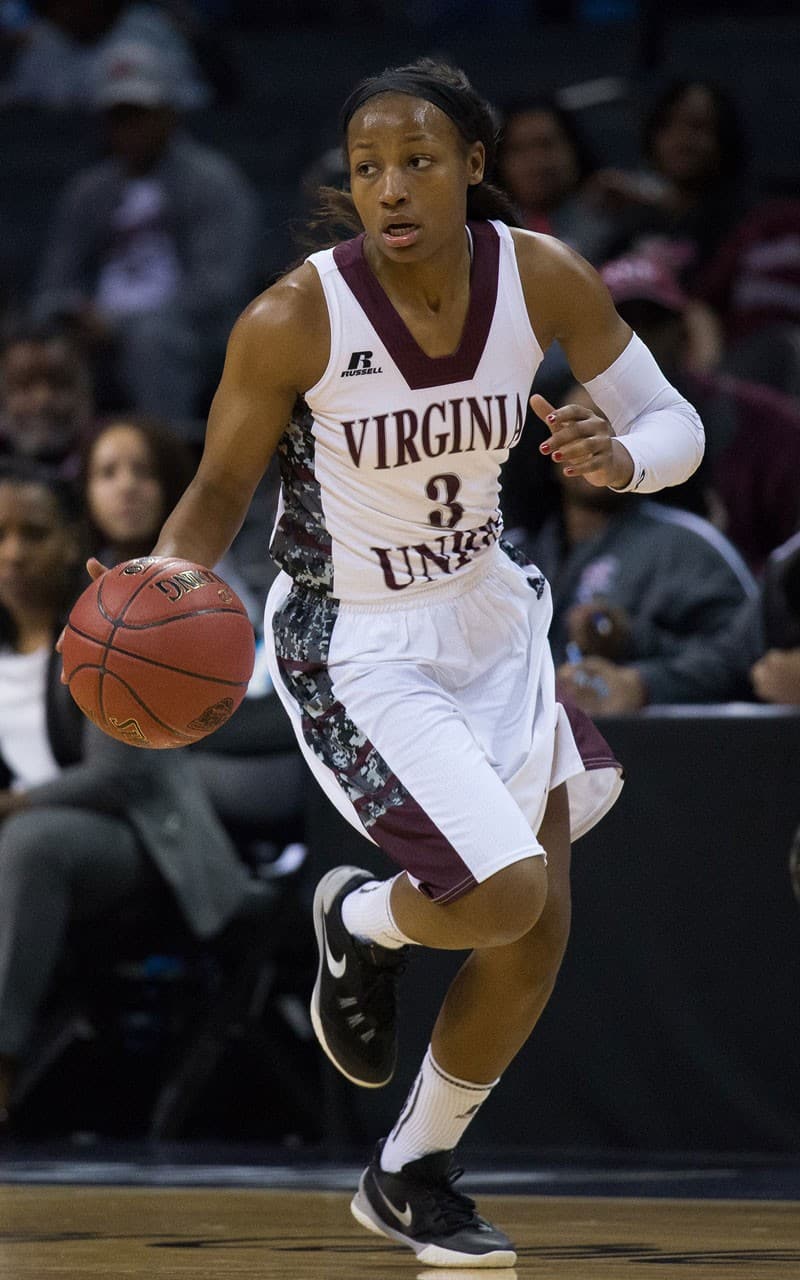 Johnson did not disappoint Wednesday in the Panther’s 84-68 throttling of hometown favorite Johnson C. Smith, scoring 28 points and dishing out 10 assists. All this in an off night shooting, making 4 of 15 shots, but hitting 19 of 20 free throws, including 18 in a row.

The Panthers however are not a one-woman show: Johnson’s teammate Lady Walker (No. 2 nationally with 13.2 rebounds per game) scored 25 points Wednesday night with 13 rebounds. The victory avenged one of only two losses for VU (23-2) and Johnson, who said her favorite WNBA player is the legendary Cheryl Swoopes.

Johnson might one day write her own WNBA legacy, but for now, she sits among the all-time CIAA greats, including: St. Paul’s College’s 6-foot -1inch tall LaKisha Phifer, the greatest shot blocker in women’s college basketball history (7.0 career) who once blocked 20 shots against Virginia Union, an NCAA record that still stands. The CIAA has also had prolific scorers in its past: Johnson C. Smith’s Kim Brewington poured in 64 points against Livingstone in 1990.

“She’s the talent that we were used to seeing in the CIAA when I was growing up,” said Joyner, “before kids started going to mid-major schools, PW (predominantly White) schools, when the Black talent had to stay at the Black schools.”

The Culture Surrounding the Games

Still, the best of CIAA neither begins nor ends on the basketball court. Hundreds of parties will be held this coming week featuring headliners such as rappers T.I., 50 Cent, Rich Homie Quan, Method Man, Slick Rick, Fabolous and actors Laz Alonso, Big Tigger and more. Former Lakers’ great Magic Johnson has attended in the past and continues to lend his support by featuring the tournament on his Aspire network. The games can also be seen on the ESPN family networks.

Although the CIAA features all but one team from Historically Black Colleges and Universities, this is not a solely Black college affair. Students and alumni from colleges from all across the nation make an annual pilgrimage to this event, along with friends and family from CIAA schools past and present. Because the CIAA was the first African-American athletic conference, institutions such as N.C. A&T and N.C. Central are former members.

As a result, fans, friends and family keep coming, regularly selling out the Time Warner Cable arena with the largest crowds arriving for Friday’s semifinals and Saturday’s finals.

Charlotte, which has hosted the event since 2006, is expecting about 150,000 visitors, whose spending power is expected to leave a $55 million economic impact in the area. The event has become so popular that hotels routinely sell out in the Greater Charlotte metropolitan area during tournament time. Nightly rates were jacked up so high that CIAA Commissioner Jacqie McWilliams had to intervene to ensure hotel costs remained reasonable. Hotel operators weren’t the only ones to take advantage.

Prices in many venues (like parking and club admissions) seem to creep up during CIAA week, but the one that rankled customers the most was a 15 percent gratuity (dubbed by some as a “Black tax”) added to the lobby bar tabs during a CIAA event at the Charlotte Ritz-Carlton in 2015. After months of investigation, the hotel agreed to refund the fee and donate $75,000 to the CIAA scholarship fund.

At the eve of the 2016 tournament, McWilliams said the incident is in the past and that the Ritz-Carlton and the CIAA now have a “great partnership.”

“At the end of the day … you pick up the pieces and keep moving,” McWilliams said. “That’s what we’ve done.”

For a list of official CIAA events visit: www.ciaatournament.org