Celebrate ‘Coming To America’ Anniversary via the EBONY Archives

Today in 1988, the classic Coming To America was released in theaters. The already successful 27-year-old Eddie Murphy, had proven his Hollywood star power with several box-office smashes (48 Hours, Trading Places and two installments of Beverly Hills Cop). But it was the movie he wrote and starred in as an African prince that changed his career trajectory. Not only did it cement his legacy as a comedian but it also opened doors in the industry for Black people. Our July 1988 cover story written by Walker Leavy on this Black American classic shows the Eddie Murphy we know at his finest – creative, influential, and most importantly, woke. 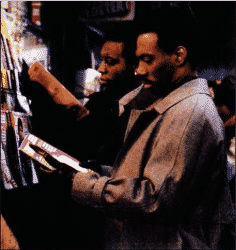 Akeem and Semmi skimming through copies of EBONY and JET magazines.

On Coming Up With The Script

The story was written by Murphy after he became frustrated with a number of scripts for other movies that had been presented to him. And he admits that this story loosely parallels his own life. “I think everybody who doesn’t have somebody is looking for someone to call their own, even though they might say they want to be single. When I’m talking to my friends, I say the same thing about wanting to be single, but if I met the bomb tomorrow…I don’t care who you are, what you have or what you did, there’s always a woman out there who can bring you down to one knee.”

On Taking A Stand In The Industry

His forthright comments during the Academy Awards telecast in April were a reflection of his deeply felt convictions about persistent racism in the U.S. He took to task the movers and shakers of the film industry, castigating the 60-year-old Academy for having awarded Oscars to only three Black actors. “We aren’t due until about 2004 [if this trend continues],” Murphy said before announcing the winner of the Best Picture award. “Black people will not ride the caboose of society, and we will not bring up the rear anymore.”

On Creating Opportunities for Blacks In Hollywood

To combat the racism [in Hollywood], Murphy has acted as a catalyst to open Hollywood’s doors of opportunity to other Blacks. He has led the way by hiring a number of Blacks, including his publicist Terrie Williams; Darlene Jackson, who designs much of his personal and stage attire, and concert promoter Alan Haymon. Several other Blacks hold key positions in his film/TV production company, and he has tried to include as many Blacks as possible in his movies. “I’ve been acting 22 years, and I’ve never seen this many Blacks on a movie set. It’s all because of Eddie Murphy,” says John Amos. “Despite what people might say about him, Eddie’s social consciousness speaks for itself.” 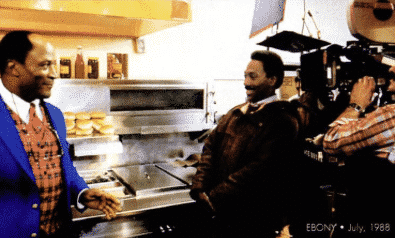 In the fast-food restaurant, Murphy and John Amos position themselves as photographers prepare to shoot the scene.

Read the full story via our EBONY Archives.

Melissa Kimble is the Senior Social Media Manager for the EBONY brand. An advocate for Black Creatives through #blkcreatives, you can connect with her on Twitter at @Melissa_Kimble.