Last year James Charles made history by transcending the mainstream boundaries to take on the role of CoverGirl’s first male spokesperson. This internet star quickly became the talk of the beauty world sparking an abundance of social media praise. However, yesterday, while preparing for a school trip abroad the “CoverBoy” tweeted: “‘I can’t believe we’re going to Africa today omg what if we get Ebola.’ ‘James we’re fine we could’ve gotten it at chipotle last year’….” 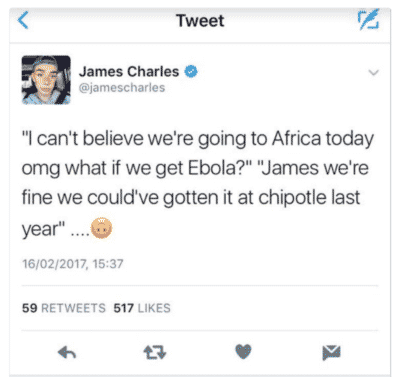 The backlash was instantaneous. Charles first defended his tweet by dismissing it as a joke but after coming under heavy twitter fire went on to issue an apology that in summary refers to his tasteless tweet as a thoughtless mistake. Let’s not gloss over the fact that he calls Africa a country. As we later learned, he a was in fact headed to South Africa, the country.

The facts: January 14, 2016, the World Health Organization has said Africa as a whole is now clear of Ebola. Africa is the world’s second-largest and second-most-populous continent with 54 different countries that it supports. 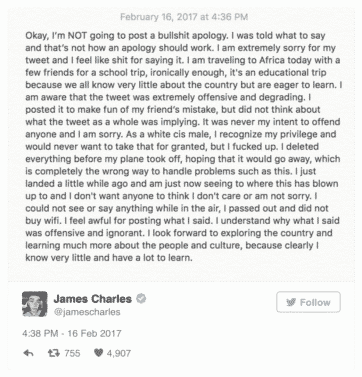 At age 17, Charles’ actions could easily be dismissed as youthful ignorance. But should it? Many are crying out for CoverGirl to be held responsible for this blunder and there are talks of boycotting the brand until Charles has been removed as brand ambassador.

CoverGirl issued a statement to New York Magazine’s style news site, The Cut, stating “James Charles’ tweet does not represent COVERGIRL’s perspective. We agree his statements were inappropriate but appreciate that he has issued an apology. We are an inclusive brand and respect all people and cultures.”

The question is if Charles remains the face of this mega beauty brand what precedence does this set for the tolerance of cultural and racial ignorance?