Detoxing Our Diets: How We're Saying Goodbye to Inorganic Foods

In 1974, EBONY published an article titled “A Farewell to Chitterlings”. During this time, Black Nationalism was on the rise and a major component of the movement was to reject not only soul food, but also popular American fare such as burgers, fries, and Coca-Cola. In the 60’s many civil rights leaders fought for integration only to reject integrated cultural eating norms in the following decade. 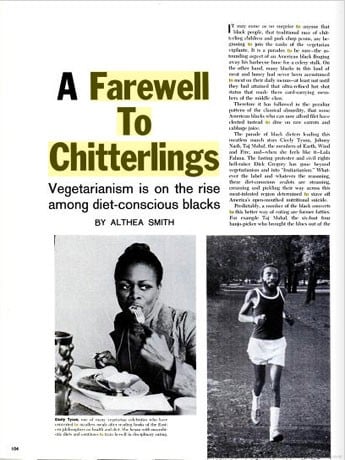 In the article, written by Althea Smith, blues musician Taj Mahal labeled the hamburger a “serious vulgarity” and many involved in the nationalist movement took 3 steps away from meat, especially pork. The vulgarity of our generation is inorganic meats and produce. It’s time to say goodbye to high fructose corn syrup and anti-biotic laden, genetically modified foods that are harming our health and humanity.

Right now urban communities are at the precipice of what could turn out to be a whole foods revolution. Although we have a long way to go, we are beginning to see more successful urban gardens being built in areas that have been labeled food deserts. If business owners are able to capitalize on the need for more produce and meats in impoverished communities, and deliver a sustainable alternative to convenience stores and fast food chains, the food revolution will have begun. In Detroit Food Field, created in 2011 has been providing community members with fresh produce from a former school turned small farm. In Sacramento, Ubuntu Green’s Home and Community Garden project has empowered members of food desert communities to grow their own produce. The project was so successful, that the Sacramento Local Government Commission now espouses the benefits of using community gardens to fight food insecurity.

There are studies to support that a vision of thriving health food stores and farmers markets popping up in what were once food deserts is not very far-fetched. In the early 2000’s African Americans, followed by Latinos were named the group most likely to purchase organic Produce, in a 2008 study delivered to the American Agricultural Economics Association. The study also found that for Americans making less than 50,000 per year, African Americans were the group most likely to try Organic products. From 2004-2007 the purchasing of organic labels increased for African Americans from 34-37 percent while other demographics saw no increase in organic produce consumption.

These statistics should lead us to questions why our communities aren’t brimming with organic eats, fruits, and veggies, and whole grains.

More than any other ethnicity, Latinos and African Americans are being marketed sugary sodas, candy, and corn syrup laden foods. Food deserts would be non-existent if we honed in on consumer buying habits and began opening health food stores that partner with local farms. Those of us who were coming of age in the 2000’s have been taught the effects of pesticides, genetically modified organisms, and hormone additives commonly found in popular American diet staples. We can no longer excuse ourselves for forgetting all that the 2008 documentary “Food Inc.” taught us. We must stop buying food that is making us sick.

Now is the time. As leaders in our community we should only be purchasing USDA Organic meats and produce whenever we have a choice and supporting the businesses who make these products available. Our children and our respective communities need us to set the example. We must embrace the notion of a grass-fed cow or cage-free chicken in every pot. Our bodies and minds depend on it.