Dorothy Irene Height, longtime president of the National Council of Negro Women the leading female voice of the 1960s civil rights movement, poses in front of her portrait inside the "Freedom's Sisters" exhibition at the Cincinnati Museum Center, in Cincinnati, wearing her signature-style Bene' hat. (AP Photo/David Kohl, File)
By #TeamEBONY  | November 28, 2016
Share

Dorothy Height spent her life fighting for racial and gender equality. But when you think of the work of leaders such as Shirley Chisholm, Amelia Boynton Robinson and Anna Julia Cooper, Height is also another trailblazer who doesn’t get enough recognition. Thankfully, the US Postal Service is taking notice.

The 40th stamp in the Black Heritage series will honor the women’s rights icon in 2017.

“Although she rarely gained the recognition granted her male contemporaries, she became one of the most influential civil rights leaders of the 20th century,” the organization said.

The stamp features artist Thomas Blackshear II’s gouache and acrylics on board portrait of Height. The painting is based on a 2009 photograph shot by Lateef Mangum, and art director Derry Noyes designed the stamp. 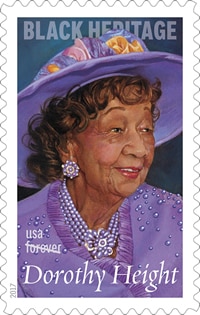 Dorothy I. Height, Ph.D., 10th National President (1947-1956) of Delta Sigma Theta Sorority, Inc., was appointed by President Carter to the Presidential Commission on a National Agenda for the 1980s. She also served as president of the National Council of Negro Women for more than 40 years.