A fundraiser created to replace the bullet-riddled memorial sign marking the location where Emmett Till’s body was found successfully reached its monetary goal.

New York Daily News reports that donors contributed $15,000 to the campaign. The marker, which is one of eight memorializing the racially charged murder of the 14-year-old Chicago teen in 1955, has been repeatedly vandalized since it first went up in 2007.

The sign earned widespread attention last week after Filmmaker Kevin Wilson, Jr. posted a photo on Facebook, writing its desecration was “clear evidence we still have a long way to go.” 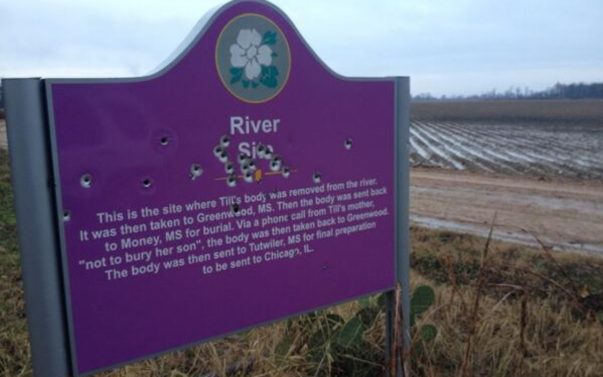 Wilson intends to make a sure film about Till’s murder. He isn’t the first to call attention to the disturbing sign. IN 2013, another passerby shared the sign with 20-something bullet holes, which led many to believe the 50 or so marks it now has are not all new.

Officials have said replacing the sign every time it’s stolen or vandalized is costly, which prompted the donations.

“We have reached our goal! But we are not done,” the fundraising page created by the Emmett Till Interpretive Center reads. “We hope to continue our work of telling the truth. We sincerely thank everyone for their support and for giving us hope.”