The Blackest Moments From The 2016 Emmy Awards

“At last.” Those were the first words Isabel Sanford spoke on stage at the 1981 Emmy Awards. The actress had just won the award for Outstanding Leading Actress in a Comedy Series for her role on The Jeffersons. She was the first Black actress to do so. Continuing to make her speech after swallowing a piece of cheese, she went on to thank God, her cast and crew and the office staff. It was arguably, the Blackest moment of the night that year. This year, these moments take the cake.

Viola didn’t just slay with her look for the night, she also dropped a serious bomb on the red carpet. When interviewed by The Hollywood Reporter, the Emmy-award winning actress reflected on how diversity has grown since her win last year. “Hollywood is doing good, but I’ll tell you women of color are doing even better. It’s like we’ve gotten to the point where women are saying, ‘You know what? I’m going to ask for what I want.’ And I love it. A closed mouth doesn’t get fed.” Spoken like your favorite auntie.

Ironic, right? The People Vs. OJ series cleaned up at last night’s awards, leading the wins with five awards.

-The People vs OJ Simpson winning everything at the #Emmys–

Chris Rock, who’s known to never hide his feelings or facial reactions, was hilariously caught on camera expressing his feelings about the winner of the Best Directing for a Variety Special Award. Yep, we were rooting for Beyoncé’s Lemonade, but Grease Live took the trophy. Wait, Grease who? We feel you Chris! 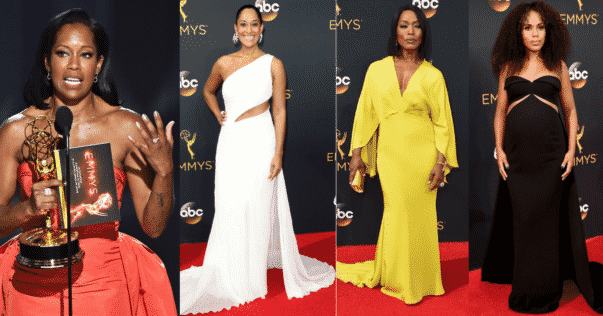 And there’s nothing like winning an award with your friends cheering you on. Take a look at the video below of Taraji celebrating Regina King.

First the New York Times, and now, Jay-Z is taking over the Emmys. Even though he didn’t make a physical appearance, the rapper’s lyrics were mentioned and remixed four different times during the Emmys. Jay’s “I got the hottest chick in the game wearing my chain” from his 2003 “Public Service Announcement” song was definitely a highlight of the show:

Sterling K. Brown (accepting the Best Supporting Actor Award in a Limited Series – The People vs. OJ): “Contrary to popular belief, I got the hottest chick in the game rockin’ my chain”.

Courtney B. Vance (accepting the Best Actor in a Limited Series or Movie – The People VS. OJ): “The Woman rockin’ my chain” a shout out to Angela Bassett. Courtney also shouted out Detroit because who wouldn’t?!

Steven Moffat (accepting the Best TV Movie for Executive-Producing – Sherlock): “Not only does she rock whatever that was, but she actually produces the show.”

John Oliver (accepting the Best Writing for a Variety Series – John Oliver Show): He called his wife “the hottest chain” obviously not knowing what everyone was quoting.

Unfortunately, the night would not be complete without a few misses.

If my great grandmother could remember who each of her 35 great grand children belonged to in her old age, surely you know the difference between Terrence Howard and Cuba Gooding Jr. and Jennifer Lewis and Wanda Skykes. Yes, we’re Black people but that doesn’t mean we all look alike. 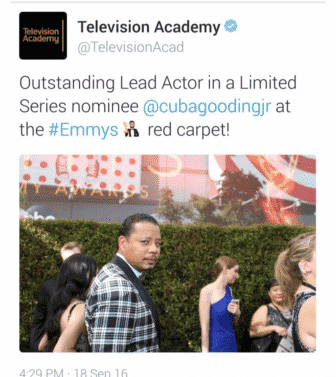 One of the most important moments of the night was by Laverne Cox. As she presented an award she echoed Jeffery Tambor’s sentiment. “Give trans talent a shot” she stated. “I would not be here today if somebody didn’t give me a chance”. We all know Hollywood can do a lot better in hiring trans men and women for roles. 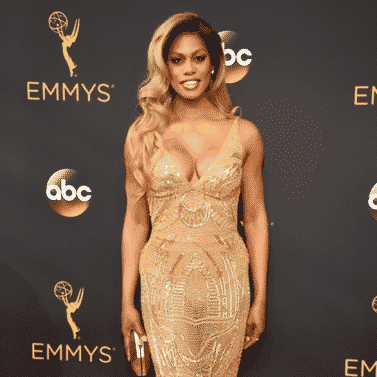