The fourth season of Netflix’s Orange is the New Black ended with the shocking death of Poussey (Samira Wiley). Perhaps no other person at Litchfield Penitentiary felt the impact of Poussey’s death more than Vicky Jeudy’s Janae Watson. As the ladies of Litchfield prepare to rise up, we are in for a tumultuous Season Five.

EBONY.com recently chatted with Vicky Jeudy about the Season Four finale, how it impacted her and what we’ll learn about Janae in Season Five.

EBONY: Hi, Vicky! Congratulations on Season Five. I’m so excited to see it when it drops. It’s going to be incredible. Just looking at the trailers and everything, it looks amazing and so different from what we’ve seen so far from Orange is the New Black.

EBONY: Exactly. Really, really dark. I know the biggest shocker of last season was Poussey’s death, and it probably impacted Janae the most. As an actor, how did you approach that shocking death and its aftermath?

VJ: Well, in terms of the scene, it really covered the whole Black Lives Matter Movement. As a person of African-American descent, that’s something I feel like I was very sensitive to already because I am a big advocate of the movement and everything that’s happened in terms of Trayvon [Martin’s death] and Eric Gardner. That’s already in my heart. So, in terms of displaying my emotions regarding Poussey, it wasn’t hard at all. I feel it all the time, and it lives with me, and it lives with me now, and it’s still living with me even beyond Poussey’s death because when you look at it, we’re still fighting for justice.

EBONY: Definitely, and it’s really sad to see that we’ve kind of reverted back in time.

EBONY: Janae is such an intriguing character. What do you love most about playing her? I know she can be pretty vicious at times, but how do you channel that energy?

VJ: Well, I love it. I love playing Janae. I think she’s so much fun. She is vicious. She has her moments but also has her softer side, which you do get to see during Season Five. But for me, I’m having a ball. I don’t like to have drama in my real life, so that’s why I became an actor because you get to play all these different characters that are involved in different scenarios and it’s fun for me.

EBONY: Definitely. From the looks of the trailer and from what I’ve read so far, Season Five, as I said before, is going to be unlike anything we’ve ever seen. What did you think when you first read the script for episode 501?

VJ: My first initial reaction was, “This is crazy. This is insane.” But it’s brilliant because I think it’s very clever because I think they keep the intensity. At the end of Season Four, when you’re watching Dasha hold that gun, you’re like, “Oh my God. Like, what is happening? Like seriously? I think it’s brilliant that they capture it within three days. So I think as you’re watching the next 13 episodes, you still have that intensity, and you’re like, ‘oh my goodness’ at every single moment. It’s like, “What’s going to happen?” I think it’s great because it allows the viewers to really go through this journey with us.

EBONY: Did you discover anything shocking about Janae this season that changed the way that you approached her as a character?

VJ: Yes, this season we go back into Janae’s backstory, so it’s very exciting. I’m very excited about that, and it was just like another layer to add on to Janae, and it’s actually really fun when randomly you find out and think, “Oh, so this is what’s going on.” 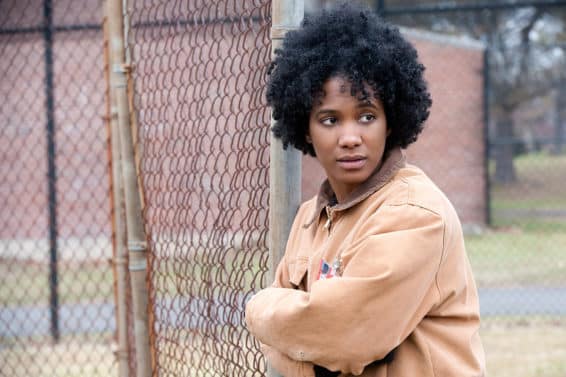 EBONY: So what is the set like? There’s this huge cast of women and you all shoot in Queens, New York. What has that experience been like for you as an actress?

VJ: Well, it’s a family. I’m working with people that I love. We’re friends and working on sets. So we’re cracking jokes with each other. We’re dancing. We’re staying up all night because the hours were long this time around in order to capture the needed footage, but it’s almost like having a sleepover party with your friends, if I could describe it in any sort of way.

EBONY: I know that you have super long hours, and you don’t really have a ton of downtime, but if you do, is there anything you’re binge watching or any film that’s out that you’re obsessed with currently?

EBONY: That was fantastic.

VJ: Yeah, I loved it, and of course it touched on the Black Lives Matter movement, so I was all in there. I love that. Also, I’m done with Season Two of Blindspot.

EBONY: I’m so behind on Blindspot.

VJ: You’re so behind? I love, I love that show. I haven’t missed one episode. Sometimes people look at me and they’re like, “Really, Vicky? I feel like it’s only action where things just blow up.” For some reason, I love it. I’m a big Jamie Alexander fan. I love her work. I love what she’s doing. And for me, there’s something compelling about a woman who has strength and who can be sexy at the same time, but then she’s not afraid to speak her mind, and she’ll kick your butt. I love those two elements. I just started Dear White People, so I’m on episode three, I believe.

EBONY: Just wait until you get to episode five.

VJ: That’s what everyone keeps telling me like, “Vicky, OK you need to watch a few more episodes.” And then, I think at the same time I am watching 13 Reasons Why. I think I am on episode seven. Isn’t that crazy how people could watch all these different TV shows at the same time? And OK, I’m going to binge on this for a couple of hours, and then I’m going back here.

EBONY: It’s amazing. So after this season of Orange is the New Black, what’s next for you? I know that you worked on Romeo and Juliet in Harlem. Do you have any other forthcoming projects that you’d like to share at this point?

VJ: I do. I can’t say anything at the moment, but as the time get closer, I could definitely share a little bit more.

EBONY: For sure. Well, thank you so much for your time, Vicky. I really appreciate it.

Season Five of Orange Is the New Black is now streaming on Netflix.