“Standing on shaky ground too close to the edge/let’s see if I know the ledge.” -Eric B. and Rakim, “Juice” (Know the Ledge)

Limitation, lack, and entrapment have always been common themes in hip-hop music. As album and concert sales continued to grow through the 80s and into the 90s, it seemed that the genre was undeniable. Hip-Hop was here and it would not be ignored. Rap music was the soundtrack that depicted the reality of inner cities. The lyrics were accompanied with visuals to further give viewers an inside look into the realities that many shared. Above and beyond music videos, when it was time to tell the stories of hood life on film, New Jack City (Jan 1991) and Boyz N the Hood (July 1991) set the precedent for a new type of crime drama with Black men and the stories of inner cities at the center.

When Juice debuted in theaters on January 17, 1992, it was the perfect time to spawn another cult-classic. As a rapper, Tupac had just released 2Pacalypse Now, a critically-acclaimed debut album. Pac’s first single, “Trapped,” depicted issues of police brutality, mass incarceration, and lack of spatial freedom-the idea that black men (and women) are stuck in violent and often destructive neighborhoods. Tupac would soon become a worldwide name and star. 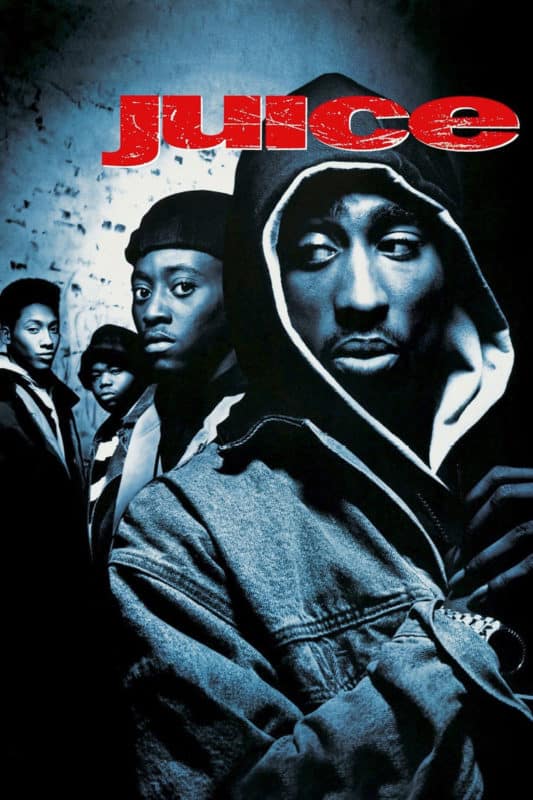 Actor Khalil Kain, who co-starred in Juice as Raheem, the ill-fated leader of the crew, recalls working with Tupac, “Pac and Treach (member of Naughty by Nature) would sit at work and write in their books and then exchange the notebooks and that sh*t would be comedy.” He laughs, “You know listening to them critique each other. That’s an effective way to work. That’s something I don’t think we do enough of where we trust each other, we trust our brother enough to be vulnerable with him. That’s love.”

Shot in Harlem in 1991, Juice was an independently financed film that was written largely as a coming of age story influenced by, writer/director Ernest Dickerson’s own life growing up in the projects of Newark, New Jersey.

The film, which had a film noir tone and style, centers on four inner-city homeboys that get caught up in the pursuit of power, happiness and manhood, which could lead to prosperity or despair depending on choices made.

“When I was coming up, in the 50s and 60s,” Dickerson explains in an exclusive interview with EBONY, “guns weren’t prevalent. You tested your manhood by how good you were with your fists, how well you could fight.”

Unfortunately, by the 80s and 90s, guns and gun violence gained a strong presence in the Black community, and Dickerson and co-writer Gerard Brown wanted to explore that.

Q (Omar Epps), Raheem (Khalil Kain), Steel (Jermaine Hopkins), and Bishop (Tupac Shakur) are four Harlem youths for whom skipping school, gambling, and hanging out are a regular occurrence. An early scene finds them and many of their friends hanging out at a local pool hall and later avoiding the police by running and jumping from one rooftop to another, just to avoid sitting in a classroom.

Manhood and what it means is the central theme of Juice, which serves as a metaphor for respect. It is that ideal of respect, that the boys want. However, what often presents itself as conflict, is the route in which people are willing to take to gain it or even fully understand it.

For Raheem, it meant being a father, however, he was lost when it came to comprehending the full responsibility of fatherhood. For Q, respect meant entering and winning the DJ competition. For Steel, it meant getting with girls. Bishop, on the other hand, didn’t have a specific vision of how to get respect, but he knew that he wanted it and thought it would take violence to get it.

In one of his best monologues, Bishop states “You gotta get the ground beneath your feet, partner. Get the wind behind your back and go out in a blaze if you got to.” The desire for respect and manhood motivated each character individually and collectively as a group.

“The crew was its own entity,” Dickerson says. “It was a fifth cast member. They were totally different guys separately, than when they were together.”

Dickerson says that one of the things he would have changed about the movie was to make the parents even less present. “I would have made them almost invisible, sort of like the parents in an old Charlie Brown movie. It was important to me to make the point that their parents no longer had a dominant effect in their lives. I know when I was a kid, my mother had no idea what I was doing when I walked out the door, and it wasn’t always good. At this age, they are trying to figure out how to become men.”

Kain retells a story of visiting a Jewish friend and observing the prayers and traditions in that household, “I thought about my Black friends that I grew up with, they don’t have that. The rites of passage that I was aware of as a kid, as a male, that you were a man if you had a kid or if you went to jail. There were dudes in my neighborhood that went to jail and when they came back, they got mad respect. They looked bigger, they looked like men and they had been through some sh*t, but that’s bullsh*t.”

When asked why the film still resonates with fans 25 years later, Dickerson has an easy explanation, “On a fundamental level, everyone recognizes themselves in Q. Growing up everyone asks themselves some pretty universal questions, ‘Who am I? Where am I going? Am I going to stay with my boys, my girls? Or am I going to step out of my comfort zone?’ Dickerson posits, “That’s what Q was trying to do. He was trying to find himself, he was about to express himself through DJ’ing which would have exposed him to a larger audience, but he allowed the peer pressure from the crew to pull him back in [which] lead to the robbery and murder.”

For Khalil Kain, a seasoned actor who will always be recognized for his work in this iconic film, the reason why the movie still resonates 25 years later is simple: “These were just good kids, they were middle-class kids. They weren’t criminals or gang bangers. They were just a crew that hung out together. Also, it’s a problem that still exists. People that are upper middle class, people who live in the suburbs don’t understand how vulnerable kids in the hood are. Even the good kids are one bad choice away from ruin. You know, and that’s just how it is. Jail, death, you’re only one bad choice away from losing it all.”