[COVER STORY] EBONY Goes Off the Gridiron with Cam Newton

In the DC comic, Kal-El, better known as Clark Kent (aka Superman), the son of Jor-El of Krypton, arrives on planet Earth by way of a tumultuous meteor shower. In a multitude of ways, this is a fitting and familiar metaphor for the young NFL quarterback, nicknamed for the beloved and powerful character. In 2011, Cameron Jerrell Newton burst into the league, inspiring a fiery storm of his own. Five years after crash-landing into the world of the Carolina Panthers, the 26-year-old has somehow remained the epicenter of swirling commotion and controversy.

To understand this curious reality, it’s important to know that Newton, towering above the competition at 6’6”—significantly taller than the average quarterback—started his professional career by breaking records from his very first game. He was the first player to throw 400 yards in his NFL debut, and he went on to mark a season of record setting. He was the first rookie to throw more than 4,000 yards; the first to rush for 700 yards in a season; and the first QB to run 14 touchdowns in a single season.

In the world of football, it was unlike anything seen before: Neither Tom Brady nor Peyton Manning, arguably America’s favorite QBs, can lay claim to such a spectacular debut.

Of course, it all almost came to an abrupt end in December 2014 when Newton was in a horrific car accident.

“Somebody is supposed to be dead,” Newton said at the time.

But as fate would have it, Superman survived and returned more powerful than before. During the 2015–2016 season, Newton saw his success reach even greater heights: He led the Panthers to a historic 15-1 season, took home league MVP honors and  made an appearance in Super Bowl 50, his first.

The star QB wearing the No. 1 on his jersey has been a fascinating figure for both the public and the press since his college days at Auburn University in Alabama. It was this past season, however, that his successes—and failures—were radically amplified. The church-going middle child of a football family (both his father, Cecil Sr., and older brother, Cecil Jr., had brief NFL careers, while younger brother, Caylin, is currently a star high school quarterback), Newton had gone through hell and high water to get to first-name-only American pop culture status—not to mention to a five-year contract extension for $103.8 million.

The year 2015 cemented Newton as a winning bet for an expanding list of popular brands that tapped him for endorsement deals, and the public saw him grow TV wings. Nickelodeon recognized a bona fide star in the bright-smiled athlete and pegged him to host and executive produce an upcoming children’s reality show, I Wanna Be.

But last season also made another thing clear: Try as he might, “Cam” could not escape the great question of race. After all, Newton isn’t just an amazing quarterback; he is an amazing Black quarterback. And in a multitude of ways, the loaded questions are always asked:

With his “unorthodox” style,  is he a transformational athlete or a rule breaker? Who is the real Cam Newton? Is he a symbol of Black defiance? Does he play the race card? Why does he dress so flamboyantly? Is he the victim of unfair media bias? White America’s poster boy for an entitled, angry brother?  Why does he lose so poorly? 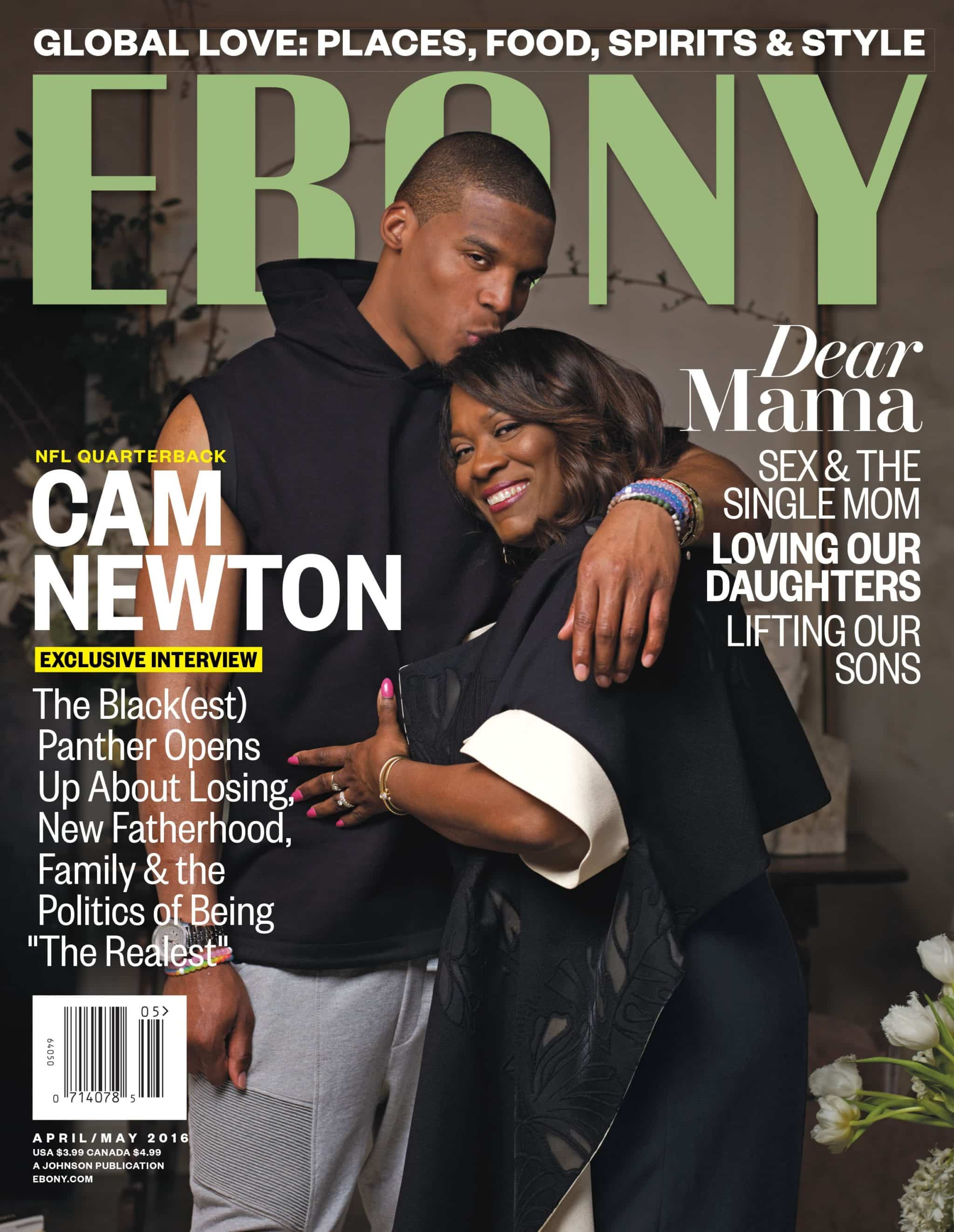 On the set of a historic mansion in Atlanta, the Black Mecca that is Newton’s birthplace, the crew nervously paces about, worried that planned outdoor shots will be foiled by rapidly changing weather. A day that started with clear skies and sun was beginning to see serious changes unfold in the atmosphere. When Newton finally pulls up, solo, in his famed matte-blue and orange 2012 Chevrolet Silverado—a tribute to his alma mater, the team scrambles to set up a photograph, but it won’t happen.

The boom of thunder startles everyone; the storm’s begun.

“How y’all doing?” Newton says to no one in particular as he walks in. As soon as he sees his mother, Jackie Newton, being glammed up the makeup chair, he beelines to give her a hug.

They small talk; it’s been a minute since they’ve seen each other. Together, they interact a lot like any other Black mom and adult son. In fact, when Newton notices that it is the hip-hop artist Future blasting, he asks the crew to turn to something “better for her.” Like a good son, he wants to protect his devoutly Christian mom from the harsh language. Mrs. Newton, however, cannot similarly protect her boy from the onslaught of sports analysis imbued with racial undertones.

Before the Panthers had even clinched the division title, the cacophony of discussion with Newton directly at the center reached a deafening high. The battery of commentary about his personal life (the birth of his child and old recycled stories about his family), chatter about his exuberant end zone moves and, of course, about the “dabbing” (the celebratory dance) seemed to overshadow an entire league. With every touchdown he and the team celebrated, there emerged another critic using racially coded language to tug at Superman’s cape. One headline made it plain: “Cam Newton and the Racism of NFL Fans.” There was even an open letter from a White woman who complained that the “pelvic thrusts” and “arrogant struts” of his victory dance were inappropriate for children.

He told reporters, “I’m an African-American quarterback that may scare a lot of people because they haven’t seen nothing that they can compare that to.”

Needless to say, his less-than-graceful moment after the humbling loss didn’t serve to turn down the volume. But sometimes it is by venturing into the heart of the storm and looking defeat—and naysayers—squarely in the eyes that a man can discover who he truly is.

Read the rest in the April/May issue of EBONY, coming to a newsstand near you! Click here to subscribe.