The EBONY Power 100: The Cover Stars

Get a sneak peek at our Power 100 cover story….

For the past eight years, the country has been both inspired and terrified by the actualization of Black power. The wealthiest nation on Earth entrusted the defense of its homeland and Constitution to the biracial son of an immigrant who grew up to self-identify as African-American. President Barack Obama’s ascent to commander-in-chief would have been impossible absent his brilliant and stunning wife, first lady Michelle Obama; together, they have challenged the country’s notion of what a power couple should look like and could accomplish. They have also opened doors for others. Obama always maintained he was the leader of the United States, not just of Black America; through strategic appointments, however—and the unprecedented window he gave the world into Black culture and excellence—his administration became the most tangible organ of Black power and possibility ever assembled on these shores.

The Obama era has run its course. The president and first lady, who are now the archetype for all American power couples, will vacate the White House before this issue leaves newsstands. Their departure underscores the continued need to showcase real Black power and to push for more access for our peers. Power creates parity, which manifests sweeping changes for Black people across our nation, and the world. That won’t be an easy feat, but the president’s first inaugural address provides us guidance:

“Our journey has never been one of shortcuts or settling for less. It has not been the path for the faint-hearted, for those that prefer leisure over work, or seek only the pleasures of riches and fame. Rather, it has been the risk takers, the doers, the makers of things … who have carried us up the long, rugged path towards prosperity and freedom.”

This year’s EBONY Power 100 celebrates our doers, risk takers and makers of things. These men and women will carry the promise of the Obama era into the future, and their accomplishments and innovations reassure us that change isn’t coming—it’s here. —Keith Reed

Out of nowhere, we hear that voice. You know, the one that sounds like church on a Sunday or as appealing as peach cobbler straight from the oven—smooth, warm, soulful. It’s fitting John Legend is singing on our EBONY set because that’s where it all began. Ten Grammys and one Academy Award later, music remains his first love. As he readies his fifth studio album, Darkness And Light, Legend—born John Stephens—is still perfecting his craft. 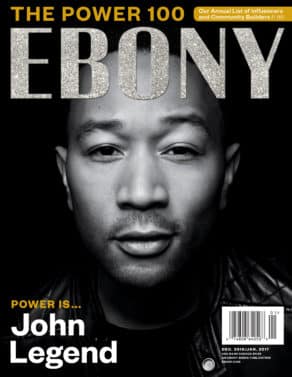 “We’re just trying to get better at everything we do,” he says about the forthcoming project, which features Miguel and Chance the Rapper. “A lot of the difference is just my own evolution as a person, as a father and as a husband. This will be the first time I’ve made an album, given those life changes that I’ve gone through. And I think you can hear it in the music.”

Legend married model Chrissy Teigen in 2013, and in April the couple welcomed their daughter, Luna Simone Stephens. The milestones have caused the 37-year-old to ponder the type of legacy he hopes to leave behind.

“I want to do as much as I can to make the world better,” he says. “Our lives are short in the context of the universe, but I feel like the best we can do is try to spread love, spread light, make people’s lives better while we can, and make it better for those who are coming after us.”

Ava DuVernay is a big damn deal. This year, the Selma director juggled two documentaries—13th and August 28: A Day In The Life Of A People; a hit TV series, OWN’s Queen Sugar; and her first big budget film, Disney’s A Wrinkle in Time, while also dealing with the loss of her father, Murray Maye. Many would crumble under the weight of the pressure bearing down on DuVernay’s shoulders, but the director says her intense schedule has kept her mind off her grief.

Still, her triumphs don’t feel as satisfying without her dad.

“I feel grateful for all of it, but I’m also putting it all into context. This year was a beautiful year for me professionally, but also I lost my father,” she says just before dissolving into tears. “When you’re sitting on top of the world, you want to be sitting there with the people who you love. I’d rather him be here than any of this happening,” she concedes. 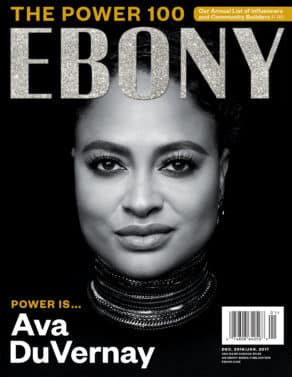 Yet she perseveres in this powerful moment. When we spoke, she was weeks away from beginning production on A Wrinkle In Time, the first film directed by a woman of color to have a $100 million budget. In an industry where money talks—and Black directors are rarely given anywhere near that sort of cash for their films—Disney’s decision to place such a major project in her hand speaks volumes. The former publicist turned indie filmmaker will be expected to deliver, but she’s not worried.

“I don’t feel pressure until [a project] is getting close to coming out,” she says. “I just focus on the joy of making it. I hope that lasts.”

He goes by many names. Nasty. Esco. Nas. The GOAT. Whatever you call him, Nasir Jones has forever changed the face of music. Born in Queens to Ann Jones and jazz musician Olu Dara, Queensbridge-bred emcee first burst into our collective consciousness in Main Source’s 1999 hit “Live at the Barbeque.” Since then, Nas has remained a constant and respected voice in hip-hop, documenting the pain and pride of the ‘hood, while also dropping jewels about Black history and recycling Black dollars. While rap is braggadocious, often encouraging spending obscene amounts on cars and diamond-encrusted Jesus pieces, Nas is able to boast with the best of them while also taking listeners to school. 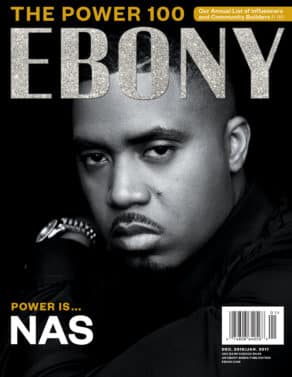 “When I see injustice it hurts, so I speak about it. It just so happens I might be wearing a Dries Van Noten suit while I’m speaking,” he says quietly.

“I like things in the world that are appealing to the eye. So why lie about it?” he acknowledges, mentioning his penchant for Italian shoes. “One thing that kills me is these holier than thou, super clean phonies who walk around like they live in heaven and they’re a step above everybody else. No, we’re human beings striving to be the best we can be. We’re striving for greatness all the time.”

At only 4 feet 9 inches tall, Simone Biles is tiny in stature, but she’s pure power in motion. Last summer, the whole world stopped and took notice as the 19-year-old tumbled, leaped and vaulted her way into the record books, becoming the most decorated gymnast in American history. While many were introduced to Biles’ 1,000-watt smile and high-flying floor routines during the Olympics, the Ohio native has been quietly dominating the sport for years. Beginning in 2013, the teen won back to back to back all-around world titles before adding another in Brazil. And by the time the Rio Games were over, Biles had racked up even more Olympic bling—one bronze and four gold medals—and an impressive new title to go along with her spoils: the greatest American gymnast of all time. 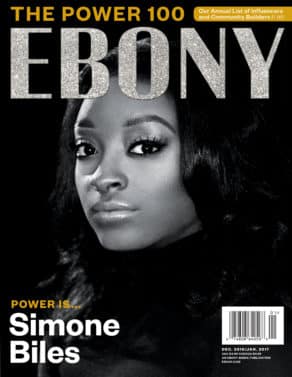 Being crowned the GOAT before your 20th birthday would go to just about anyone’s head. But not Biles; she continues to remain humble.

“To me, it still feels normal because it’s what I do,” she tells EBONY while on the road with Kellogg’s Tour of Gymnastics Champions. “I feel privileged and honored to go out there and represent the United States every single time.”

Read more in the Dec.-Jan. 2016-17 issue of EBONY Magazine when it hits newsstands! Click here to subscribe.