EXCLUSIVE: Director Nefertite Nguvu On ‘In The Morning’ & Black Female Directors In Hollywood

Powerhouses like Shonda Rhimes and Ava DuVernay are currently dominating the entertainment industry. However, if you truly examine the numbers, Black women are almost nonexistent behind the camera, particularly when it comes to mainstream films. However, there are Black women like filmmaker Nefertite Nguvu who are continually making strides in order to make sure that our stories are being told.

Set in Brooklyn, New York, Nguvu’s feature film debut, In The Morning, follows four women as they ambitiously attempt to balance love and the power of choice. Shadow and Act said of the film, “Nguvu crafts each relationship and character as its own poem, evoking a certain emotion that is elevated by the cinematography of renowned image-maker Arthur Jafa.”

Recently, EBONY.com spoke with Nguvu about why she was inspired to make In The Morning, the state of Black women behind the lens and her upcoming partnership with AT&T’s Hello Lab.

EBONY: Thank you so much for speaking with me today, Nefertite.

Nefertite Nguvu: Thank you for taking the time. I really appreciate it.

EBONY: Of course. Your film In The Morning is so beautiful. What was the inspiration behind that film?

NN: Quite honestly, I was inspired by the women in my life and the women that I know. I am such a huge fan of films that tell these small character-driven stories that filmmakers like Ingmar Bergman tell. I love them, and I felt like I wanted to see a film like that but with women who looked like me and the other women that I know in them. Quite simply, In The Morning is my love letter to Black women.

EBONY: Wonderful. What I really loved about the film is that it explores all of these different aspects of love and relationships. I think for Black women in particular, in the media we’ve been told that we’re unlovable. We don’t even get to see ourselves being loved in films. We have the staples like Love Jones and Love & Basketball but, there are really no recent gorgeously done films like yours.

NN: Thank you. I feel like we take such a hit, as you say. If I had to judge us based on the things I see in television and film I’d be in a world of trouble; in mainstream film and television at least. I feel like we’re faulted daily with everyone else’s representation of who we are. I certainly wanted to do a film that I feel like reflects the truth of what I know about us, what I know about the elegance and the grace and the wit and the vulnerability and the sensitivity of Black women to be in. That certainly doesn’t mean that we’re perfect because we’re human and, as all human beings are, we’re certainly flawed. I feel like we certainly need to be able to have more nuanced stories about our lives. That was definitely one of my goals was making In The Morning is telling a nuanced story. I love Love Jones. I’m such a huge fan of that film. I can’t believe it’s the 20 year anniversary or something.

NN: That makes me feel old, but see, I’m like, that’s so crazy that it was that long ago. I certainly think that we’re overdue with the story. What I loved about Love Jones is it’s this super contemporary Black story. It didn’t have anything to do with poverty or any of other things that we get pigeonholed into when studios are telling our stories. I wanted to do the same thing, so I hope that other filmmakers will continue to do the same because our stories are so expansive and go far beyond the films that we are allowed to make, so I certainly hope that I’m doing my part with telling this story.

EBONY: Definitely. Speaking about making this film, I heard that you shot In The Morning in eight days. What was it like to get that out, to get the cast together, did you have time to rehearse any? That is a very quick shooting schedule.

NN: It was super ambitious. Most studio films certainly take about 30 days to shoot a feature, and we did ours in eight. That choice was primarily tied to the budget that we had. We raised funds on Kickstarter. This was a completely independently made film so we just didn’t have the budget to stretch out in the way that I would’ve liked. The only way to use the budget that we had to work with was to condense our shooting days, and certainly, as a first-time feature film director, I knew that it was super ambitious, but I felt like everyone who was working on this film, was committed to telling this story. We just kind of did it Nollywood style and made it happen. Part of the reason why we were able to, I will say, is because the film is character driven. Some of the things are long so there’s not a lot of moves and the other things that would take up a lot of time in a normal shooting schedule. We were able to do a lot of pages a day because we’re literally in the same place and we were able to keep some locations so that we can get more than one scene in a day. I knew going into it that our shooting days would have to be condensed, so I was fortunate enough we have long lead time leading up to that. I had a three-month rehearsal period with some of the actors, so we were really able to work the story, work very intensely on the characters, so by the time we got to set everyone knew what they were doing. We knew we wouldn’t have a lot of time to be figuring it out in the moment and that everyone would need to hit the ground running. The actors worked incredibly hard, and so we were able to make it happen and am super proud of where we landed.

EBONY: It’s wonderful to experience. Can you tell me a bit more about the inspiration behind your company Hollywood Africans and why you felt like there was such a need for it?

NN: The title Hollywood Africans actually comes from a painting that I really love by Jean-Michel Basquiat. I fell in love with him when I started to learn more about this work. That title always stood out to me because Africa centered on everything in my life. I was always working from this position of being African and having a strong respect and reverence for African culture and history and all those things. I felt like Hollywood Africans was the perfect joining of my two worlds and this desire of mine to be a filmmaker, to tell stories on film. I always loved the title and I decided to name my company that because I believe it’s who I am and what I’m trying to achieve as a filmmaker, as a storyteller.

EBONY: Excellent. What do you think about the state of Black women behind the camera currently? There are amazing things happening in film, but they are few and far between. Do you feel that it’s still extremely difficult for you to get your foot in the door or to speak to the people that you want to speak to about the projects that you want to create?

NN: I think it’s two-fold. I think on the one hand there are some incredible things happening for Black women storytellers right now from Ava DuVernay to Gina Prince-Bythewood. There are some sisters who are really doing some wonderful things which are opening doors for other Black women. With that being said, you’re right; these are by and large exceptions to the rule. I just was looking at some statistics, because people love to send me these articles.

NN: Point three percent of directors working in Hollywood are Black women. It’s horrible, and there are so few opportunities for us. I think one space in which we are thriving is in indie film. Some incredible Black women filmmakers who are making films independently who’s work may not be on the radar of the mainstream because it’s not a work from Marvel or on a major network, but they’re making incredible documentary films or narrative features, all working in this independent space. It takes so much courage and so much heart to be able to do this in the face of these statistics. I think the thing that connects us all and that keeps us going is that we recognize how important it is to tell our stories. It gets back to what we were just saying about representations of Black women in the media, and how important it is for us to keep doing this work to counteract that. It’s been rewarding for me, but it’s certainly then full of challenges. The thing that keeps me going is not myself and my desire. I think of the bigger picture, and I think about the context in which I’m making films and the people that I’m making films for. That’s the thing that keeps me going, and I’m sure it’s something that keeps the other colleagues of mine who are working in this independent film space going too because they’re right. It is not always easy, and there are so few opportunities for us that the only thing that keeps us going is the love and the higher purpose of telling our stories. 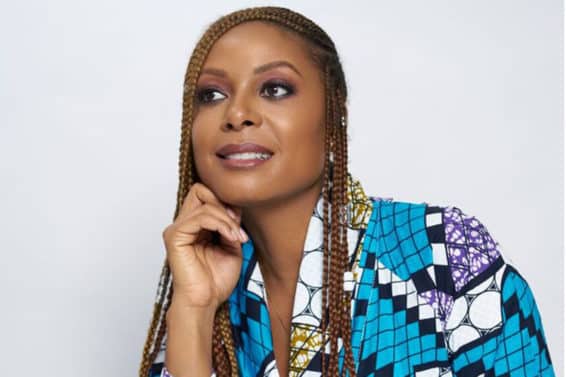 EBONY: Absolutely! Can you tell me about your partnership with AT&T?

NN: I’m super excited about this film. I was actually just finishing working on the second draft. AT&T has a project called Hello Lab that they do annually. I believe this is the third year that they’re doing it. This year they went to a couple of different people in the entertainment industry and asked who the filmmakers that they were interested in working with are. Common was one of the people that they went to and I had the pleasure of doing a couple of pieces for Common last year for his album Black America Again. When they asked what directors he is interested in,  he named me. That is how this came about. Through that program, AT&T is giving the filmmakers who are in this group a budget to make narrative short films. My film is called The Last Two Lovers at the End of the World, and we’ll be shooting that in June out in LA. I’m super excited about that. This is the first time that I’m making narrative work that isn’t self-funded, or crowd funded so it certainly is very different to have the resources at your disposal, it’s been a huge blessing, and I’m really excited about this project.

EBONY: Wonderful. I really appreciate you speaking with me, Nefertite. In the Morning is a true gem.

NN: Thank you so much.