Standing atop the first place podium at the 2012 Olympic Games, Gabrielle Douglas grinned, crutched her victory bouquet and waved at the audience. The medal she had just received, after posting a total score of 62.232, had never been worn by someone who looked quite like her. Douglas, just 16 at the time, had done more than just win in front of the world; she accomplished the unprecedented feat of becoming the first African American female to earn the all-around gymnastics gold medal at the Olympics.

Surrounded by a crowd of cheering fans and other family members, Douglas’ mother, Natalie Hawkins, began to cry. Each member of the Douglas family, in attendance as usual, wore team USA paraphernalia to support their kin on the largest stage she had ever competed on at the time.

In her magenta leotard, adorned with sequins that shined as bright as her smile, Douglas told reporters that she was blessed with victory, “It’s a win, win situation,” she said.“ All the glory goes to him and the blessings fall down on us.”

Douglas nabbed the individual gold in the women’s artistic all-around category just days after winning Olympic gold with her teammates. And while she played a significant role in the “Fierce Five’s” first place finish, Douglas and the other four members of her home team–Natalie (Mom), John (brother) Arielle (older sister) and Joy (older sister)–could not have imagined the whirlwind of attention that would follow.

Fast forward four years, past the scrutiny, past the countless talk show interviews, magazine covers, award speeches, a book release, and Kellogg plastering her picture onto the corn flakes box, and Douglas is once again chasing history. She’s 20-years-old now, and while so much has changed in her young life, two things remain constant: the staunch support of her loving family and her desire to win the gold.

Douglas is on a quest to defend her title and become the first American ever to win a back-to-back gymnastics gold medal in the all-around category at the upcoming 2016 Olympics in Rio de Janeiro. Her mom is her manager now, and her sisters are an integral part of her signature GK elite leotard brand. She’s moved to Ohio to train at the Buckeyes gym, and is residing with her grandmother, Miss Carolyn. Plus, after a brief hiatus from competition, Douglas has since added six more medals to her trophy case, including another gold at the American Cup this year.

Despite initial apprehension, Douglas agreed to chronicle her journey back to the top in a new reality series titled “Douglas Family Gold.”

The show brings fans directly into Douglas’ world. The training, the failure, the hard work, the redemption and the goofy moments she shares in between it all with her family. 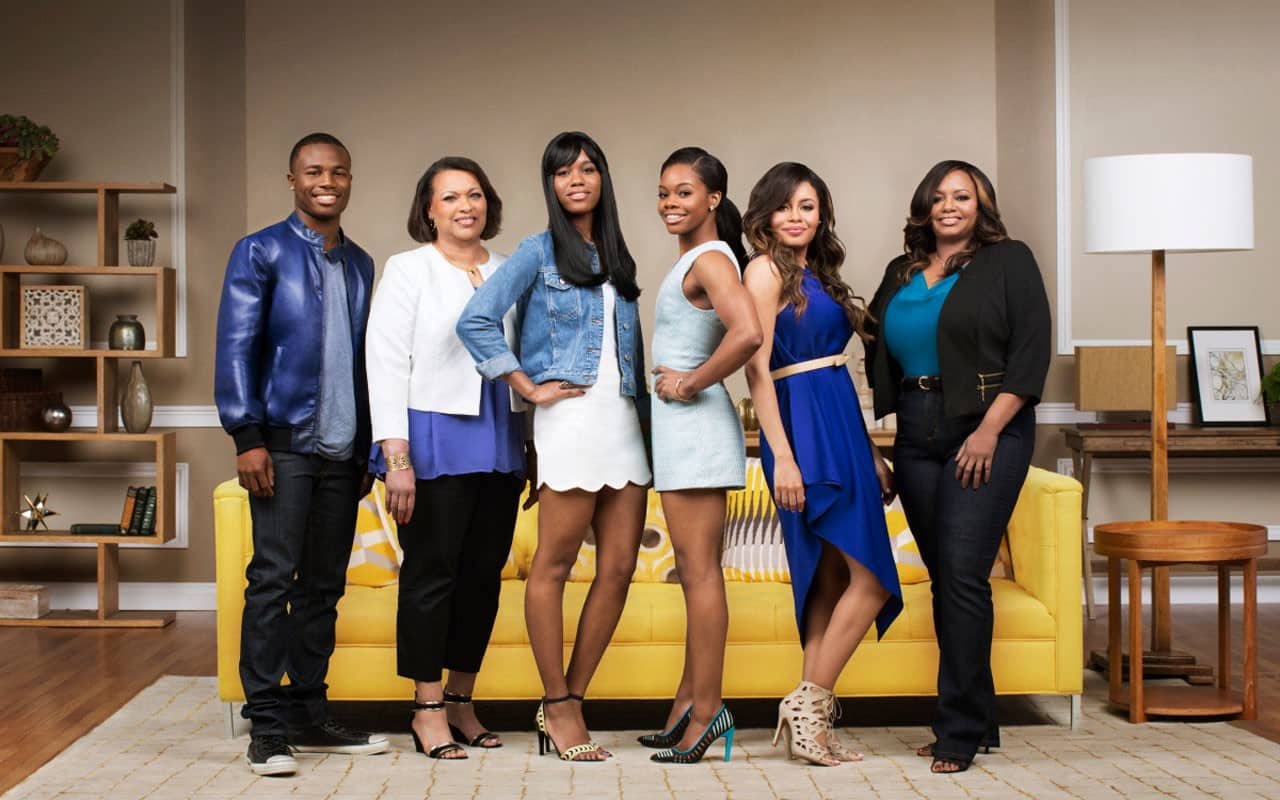 “I think [viewers] will see just more of an inside take on how we stay together as a family,” says Hawkins, who has been open about the struggles she faced early on to support her children as a single mother. “We wanted to put something bright and inspirational out there on the TV. For me and all of us,we want people to take away a lot of laughter, family time, drawing inspiration and what it takes to accomplish your goal. Our show offers some of the behind the scenes of how our family tackles the challenges and also how we celebrate the victories… And I think what everybody has not ever seen is Gabrielle as the prankster.”

Douglas, or “Brie” as her mom calls her, concurs. “ ‘In ‘Douglas Family Gold’, you get to open the curtain and actually see what it takes,” she says.  “The hard work in the gym, me balancing being a professional athlete, and training at the same time.”

Video: Give Them Their Flowers: Jemele Hill, Karrueche Tran, Tia Mowry and More

In the inaugural episode which aired last week, cameras showed Douglas practicing with her new coach Kittia Carpenter, ahead of the P&G National Championships. Since her coach and the facility she trains at are located in Ohio, Douglas is forced to communicate via Facetime from Miss Carolyn’s house with her mom and siblings, who live in Los Angeles.

During the conversation, Douglas appears visibly anxious about making the national team and how team USA coach Marta Karolyi feels about her skills. Her mother consoles her, saying: “I just want you to have fun, but you love to be on that podium.”

Replies Douglas: “Sure do.”