Yassss! That [Unofficial] A Different World Reunion Is Upon Us

An official A Different World reunion is not in the cards right now, but you can get your modern-day Dwayne Wayne and Whitley Gilbert fix by tuning in Sunday to Disney’s teen hit, K.C. Undercover.

Jasmine Guy, aka Whitley from ADW, begins a three-episode story arc this weekend as she is introduced as an evil spy and aunt of K.C., who is portrayed by Zendaya. At the end of the story arc, Kadeem Hardison, who portrays K.C.’s secret agent father Craig Cooper, will eventually meet up with Guy on screen in a manner that gives a fun, insider’s nod to A Different World.

The kids won’t get it, but the adults will.

Then again, the kids might. “We do have a whole new generation of viewers thanks to Netflix,” says Hardison, in an interview with EBONY. “Netflix has opened up a whole new world.”

This is Hardison’s and Guy’s first on-screen reunion since the college-based 1980s classic went off air after a six season run. After the show ended, Guy assumed more and better work would come. She was shocked when the movies didn’t materialize and more shocked to hear others downplay the success of the show. And that’s why working with Zendaya–who is outspoken in her pro blackness–was so important to her.

“We gotta get off the plantation,” says Guy. “Stop letting white people define what Black is. I saw how we were treated after A Different World. People would say ‘You’re just lucky to be between Cosby and Cheers.’ I used to say, ‘That’s some bullshit.’ That broke my heart.”

Guy has certainly moved on despite the haters, but she and Hardison wonder why ADW can’t get a reunion show the same way that the casts from Friends and Full House just experienced. The crew still talks to each other, and they would love to see a reunion happen.

“I love these people, so I’m very protective,” says Guy.

Guy and Hardison hatched the K.C. Undercover operation last year at Hardison’s 50th birthday party in Los Angeles. It was a surprise, and Cree Summer asked Guy to fly in for the festivities. Guy obliged and while at the party, K.C. Undercover executive producer Rob Lotterstein saw the two together and hatched a plan to bring Guy to the show. But Lotterstein didn’t do it until he got a low-key OK from Hardison. “He asked, ‘How’s Jas? Y’all good?” 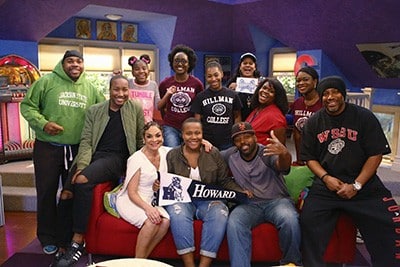 Wrap party for K.C. Undercover: Cast and crew showed up sporting gear from ADW’s Hillman and their own universities.

When Guy arrived on set, Zendaya just happened to be in the midst of clapping back at a magazine that altered an image of her by slimming her already-slender hips and thighs. Guy appreciated Zendaya’s response to that situation and others since then, adding that the starlet has a lot on her plate. “They don’t ask young little White girls to do politically what they ask [Zendaya] to do.”

And as for that climactic fight scene between good spy Hardison and bad spy Guy? “I did that kick,” says Guy of her onscreen acrobatics. “And that kick was pretty high and I told the crew to get it just one time.”

The day they wrapped, the K.C. Undercover crew came to work rocking Hillman T-shirts.  As for more details on an ADW reunion? It might be up to the fans to push it to a studio and make a fuss.

“I’ve been trying and Debbie’s [Allen] been trying but we don’t own the show,” says Guy. “I see Full House and other shows coming back and I think it has to be audience driven. It wasn’t a fluke. What people saw had substance. I would love to see it. Everybody on that show was good. I would love to see the characters that we created come in and show people where we would be 25 years from then.”

Subsequent episodes in the story arc air April 17 and 24.