Living Your #Selfish20s to the Fullest
Advertisement

Gernae Chase, 24, is not a household name.  However, she is making a virtual blueprint for her millennial peers to make note of. After graduating from Johnson C. Smith University (JCSU), Chase landed an internship with a local radio station in the D.C. area. It was part of her ultimate dream as she worked with one of the top radio personalities she admired.  Without an explanation, the radio personality quickly told Chase that she would not have a successful career in the industry. The internship transitioned into a full-time job in the promotions department. Bored from staring at numbers daily, the station seemed to have did Chase a favor by releasing her as a “mutual resignation.” At time she did not see it at as such as she lamented over her life. Bills were piling and other life drama was settling in.

During an evening out with friends, Chase found encouragement among her circle. She began working her social media sharing her fun and revelations with the hashtag #selfish20s. Unexpectedly, Chase’s mantra went viral on social media and has morphed into a movement. Giving “selfish” a different spin, Chase is encouraging her peers to use this time to live fully in their passion and do what they are meant to be doing; especially in their careers.

In a study on the Millennial Generation released in 2012, the U.S. Chamber of Commerce Foundation found:

“Half to two-thirds of Millennials are interested in entrepreneurship, and more than a quarter (27 percent) are already self-employed. Males, blacks, and Latinos are most inclined toward starting their own business; females are more likely to be interested in starting nonprofits.  In 2011, many took the leap. Millennials launched almost 160,000 startups each month, and 29 percent of all entrepreneurs were 20 to 34 years old.”

After a few challenges, Chase has hit a stride. Broadcasting from a studio across the street from Howard University, she is perched comfortably at a contoured black table as the host of her own internet radio program, The Gernae Adele Morning Show. On Saturday mornings Chase is engaged in witty banter and laughing it up with her co-hosts DJ Moe the Motormouth and TruthorDarion over the latest hot topics in entertainment and news on current events. With a number one rated show, her ultimate goal is to become nationally syndicated and she is using this time selfishly to get there.

Here is how Chase describes #Selfish20s to her listeners:

Gernae Chase: It’s not a self seeking arrogance. It is a decade of discovery. It’s about finding out your passion and what you are meant to do with your life. It simply means anything you want to do in this life, do it. It’s also about the work ethic you put into it to get to where you need or want to be. It doesn’t stop in your 20’s. I want longevity. Eventually I want whatever I do in my 20’s, to continue, so I will have my thriving 30’s. When I move on to my 40’s I want the experiences to continue and be unforgettable. By the time I reach my 50’s I want to be fabulous and then have sensational 60’s. I’m stopping there because by then I want my kids and grandkids to name the rest of my decades.

EBONY: What was your original plan for your life, especially your 20’s?
GC:  I always knew I wanted to be a radio personality, but JCSU didn’t have a radio station. I spent forever searching for an internship. The summer before my senior year I landed one at CentricTV when it launched. I was one of their first interns.  I went back to school and I wanted to land another internship. I interned for Radio One for one day, because I wasn’t receiving credit for it, but I never gave up.  I landed another internship at a radio station days after graduating.

EBONY: What does it do to you to hear someone you admire tell you otherwise about your passion and what you want to pursue?
GC:  I could have let it get to me, but I didn’t. The point of an internship is to get what you need to move on. I went back the next day and continued to work hard.

EBONY: Does your Selfish 20’s still include the "what if’s?" How do you combat this?
GC: When I started my show I was doing well, but I didn’t realize it. I was too busy still focusing on what I didn’t have. That’s the thing, you might think you are at a standstill, but you really aren’t, especially if you have the work ethic and are doing the work. I kept a diary and the cover was very pretty, but inside it was dark. I was writing down my prayers but they were complaining prayers. One of the lessons I learned at JCSU is to surround yourself with success. When you do that, you are bound to become successful in your own way. All of my friends are living in their passion and we encourage each other. This helps me stay motivated. I switched up and got an ugly composition book, but the inside is filled with positive thoughts.

EBONY: With the industry and economy the way it is, do you feel you were forced into going the non-traditional route by striking out on your own in radio?
GC: I went on countless interviews looking for a job. I interviewed with one particular company numerous times, but never got hired. I began to wonder ‘did someone blackball me?’ But sometimes God is doing this – Chase takes a notebook and slams it on the floor right at her feet – you’re telling and asking him for something and he placed it right at your feet all along.


EBONY: Recap how Angela Stevens of the reality show L.A. Hair found out about #Selfish20s.
GC: Celebrity stylist Scot Louie saw an Instagram picture I posted wearing one of my Selfish 20’s hats, he emailed, told me who he is and was interested in getting two of the hats. At first I was like ‘yeah ok,’ not believing he was for real. I sent him the hats and a few weeks later I was in LA working the BET Awards. I was on the red carpet and I happened to look and I saw this guy wearing my hat. It was Scott. Not long after that, Angela from LA Hair posted a picture to her social media wearing the hat using the hashtag #Selfish20s.

EBONY: How would you advise your peers to navigate their 20’s?
GC: If you don’t have to move out of your parents’ home, don’t. Save your money.  Don’t stop at your first job. Don’t put your anchor down. Maneuver in and out of any business. You have to realize there is so much more to what you initially thought you want to do. Explore it. You also have to be a walking inspiration. That’s one of the main reasons I created the hats and t-shirts with the saying. I want to continuously motivate my peers.

EBONY: Where are you in your journey with the movement now to help you get to the next level—the Thriving 30’s?
GC: I’m no longer on the dark side. I see the light. I have my platform and right now I’m just coasting with it. 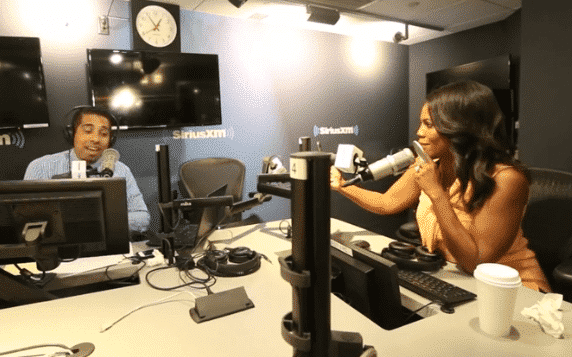