When Mahalia Jackson passed in 1972, we put everyone on notice that the “world’s greatest gospel singer” was no longer with us.  In the April 1972 issue of EBONY, we shared the highlights from her homegoing service, which read like a “who’s who” of Black America. 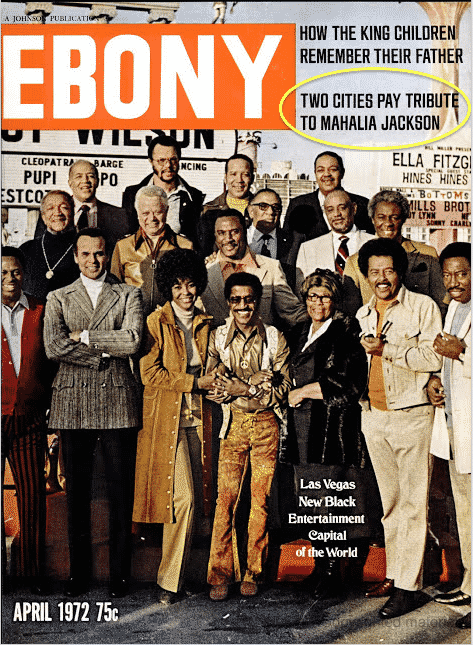 During the Chicago leg of her funeral, celebrities like Aretha Franklin, Mrs. Coretta Scott King, Sammy Davis, Ella Fitzgerald, Dick Gregory, Lou Rawls and gospel singer Bessie Griffin joined thousands of fans. It was a testament to her greatness, one that will now be honored again thanks to a recent unearthing of unreleased music.

The New Orleans Advocate shares the story on their site:

While exploring the Historic New Orleans Collection’s archives several years ago, Glen Smith, a gospel enthusiast from Ohio, made a remarkable discovery: Little-known recordings of the late great Mahalia Jackson in her prime.

He quickly contacted Anthony Heilbut, a respected record producer, author and gospel expert based in New York. Heilbut was floored. For decades, he’d been on a quest for rare Mahalia music for a long-planned album. Without warning, Smith had found exactly what he needed.

The old reel-to-reel tapes from the Historic New Orleans Collection supplied 11 of the 22 tracks on “Moving On Up a Little Higher,” the acclaimed new CD produced by Heilbut and released by Shanachie Records. Fans can expect to hear major gems from the great songstress, a feat that Heilbut has been very intentional about.

“I spent many years frustrated that so much of Mahalia had not been documented,” he told The Advocate, “I think these are some of her greatest performances.”

In 1945, she recorded “Move On Up A Little Higher”, the song which catapulted her toward stardom.  It sold eight million recordings through the old Apollo label, an accomplishment that is just as amazing now as it was then. Writer Langston Hughes said of the recording: “Its slow, syncopated rhythms caught the fancy of jazz fans…, who bought it, not for religious reasons, but as a fine example of a new kind of rhythmical Negro singing. The gospel song began to reach a public for whom it was not intended at all.”

You can now find this musical gem on Amazon.