In a now-deleted Instagram post from Thursday night, obtained by the Jasmine Brand, Meek Mill discussed being arrested by a corrupt officer, the alleged bias of the judge presiding over his case and criticized the Philadelphia judicial system.

The Philly rapper is currently out on bail after serving a few months in jail on a probation violation for popping a wheelie in New York City. He was initially arrested in 2007 on drug and weapons charges and sentenced to three years in prison and 10 years of probation.

“A new trial would mean case dismissed,” Mill wrote. “The D.A.’office don’t want to fight my case because I was arrested by a dirty cop and was illegally arrested and wrongfully convicted in 2007. The same case I served over 3 years in jail for and 10 years later they trying to give me a 4 year sentence for popping a wheelie!!”

The rapper went on to discuss how out of the “1500 cases” involving his arresting officer 1499 of them were brought in front of a new judge except for his case. “I can’t speak on it but everyone from the legal world knows boundaries have been crossed to attempt to take my freedom,” the “Wins and Losses” rapper continued.

He is referring to all the allegations of unethical behavior by Judge Genece Brinkley throughout the years she has covered his case. Meek Mill’s legal team has accused her of asking him to sign with her colleague’s management company and to remix songs by Boys II Men. Brinkley denied the rapper’s request for a new trial after attorney’s questioned the integrity of his arresting officer.

Now reportedly, there is audio of an off-record conversation, in which Brinkley’s lawyer, A. Charles Peruto Jr., states his client should have granted the rapper with a new trial. “Even her lawyer admitted this on tape saying I deserve a new trial,” Meek wrote. “He is the same lawyer who came to see me during my incarceration and had a full conversation about my case and said he could get me out because he knows my judge. I didn’t pay him money and weeks later he’s my judge’s attorney which is beyond conflict of interest!!”

The rapper continued to speak on the unfair “code” among the judiciary and how they not only are doing this to him but others like him who are trapped in the system but don’t have the benefit of  celebrity “spotlight.” He speaks about this topic on his song, “Stay Woke” featuring Miguel. 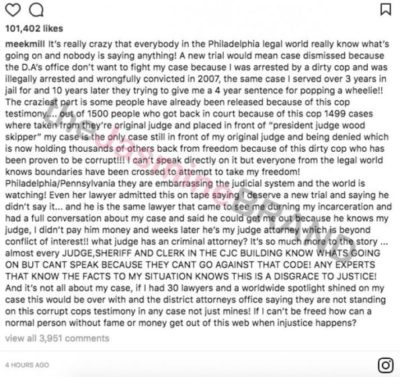