Paris Jackson, 20, responded to critics who called her out for not attending Sunday’s Billboard Music Awards, where her aunt Janet Jackson, 52, received the Icon Award, according to Page Six.

After Janet performed a medley of her biggest hits, her mother Katherine Jackson, her sister Rebbie Jackson, her nephew and brother to Paris, Prince Jackson were spotted in the audience. Afterward, the daughter of the late Michael Jackson was flooded with comments shaming her for missing such an important family moment.

The model asked her “social media followers, friends, stalkers, lovers and haters, and fellow moonwalkers” to stay out of Jackson family drama. In a series of Instagram stories, she continued: “Please do not tell me/demand/try to control how I handle my relationship with the people in my life, specifically my family. As amazing and as sh***y as things can be, it is no one’s business but ours. I understand that some of you feel some sort of connection or need to be a part of our lives considering you watched us grow up; however, I am handling my situation exactly how my father did. And I am happy keeping it that way.”

She also went on to say the Jackson family despite having such public lives due to their musical fame is like every other family. “Every family has their moments of trauma, heartbreak, separation, love, oneness, tribe, pain, everything. EVERY FAMILY,” she wrote. “My family, specifically, and a good number of others… Well, our drama is broadcasted worldwide through media, but that doesn’t mean our family issues are any different from yours. Ours are just made public. Every level has another devil. Every life has their own s**t to deal with. We ain’t inferior or superior to y’all. We’re all f***ing human, so let’s act like it.” 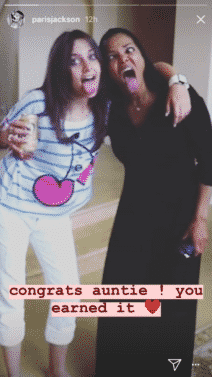 The 20-year-old ended her rant congratulating her aunt on the career milestone and made it clear she loves and respects her relatives. “I will always have love and respect for my family. ALWAYS. There is nothing more or less than that, that you need to know. Thank you for understanding,” Paris wrote.

There have been reports of many members of the Jackson family being worried about Paris after she posted questionable social media posts earlier this year.

Chet Fuller, a Groundbreaking Journalist, Passes Away at 72