RIP Prince: EBONY Looks Back at His Fearless Fashion Moments

Today (April 21) marks the third anniversary of the passing of music icon Prince Rogers Nelson. Aside from being an endlessly talented musician, the “Purple Rain” singer was known for his eclectic style and flamboyant presence. He had an extravagant fashion sense that broke the boundaries of gender norms, thanks to his use of makeup, low-cut shirts, ruffles and lace. Prince is likely one of one when it comes to men who are known to dominate on a basketball court while in a blouse.

In his career that spanned more than four decades, Prince not only supplied timeless music but he also pushed the barriers of style and fashion for Black men in the business. Without the androgynous figure daring to wear assless chaps or don layers of sequin, we wouldn’t see a generation of artists including A$AP Rocky or Young Thug freely expressing themselves in women’s clothing. 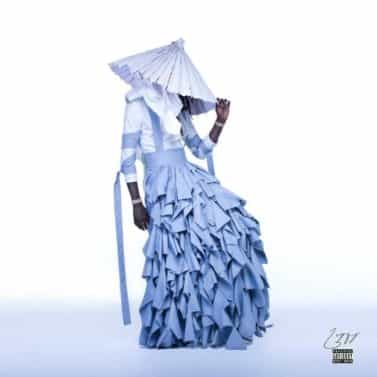 EBONY web designer Sam Jennings worked with Prince from 1998-2007 as his in-house webmaster and would eventually become his creative director. “Working for Prince, it was a highly creative environment,” Jennings said. “He put his music and his art at the forefront of his life.”

When asked about the musician’s extravagant style, Jennings said, ” [Prince] considered every aspect of what he was doing and that included his stage presence and his outfits. … He matched his band, he matched his album, and there was a color theme for each album. Just as a visual artist, that was something that was appealing.”

Outside of his musical creations that include playing all 27 instruments and providing all the vocals on his debut album For You, EBONY remembers the iconic and unfiltered style of the 57-year-old who died on this date. 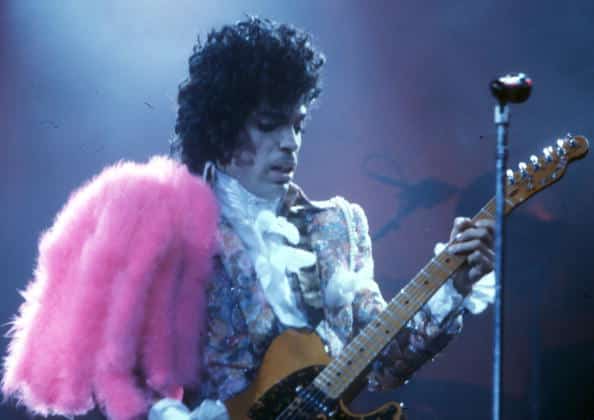 During the 1970s, Prince was known for his decorated pantsuits, ruffled blouses and his singular fingerless glove. He accented the look with a fur pink stole. 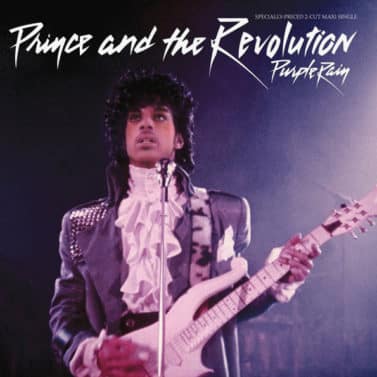 After the release of his sixth studio album, Purple Rain, Prince embarked on a tour the next year, and each night his costumes were variants of his signature purple outfit. The most revered one being the purple double-breasted jacket with the accented studded shoulder, a ruffled blouse and jacquard pants, which is featured on the cover art of the 12-inch vinyl. 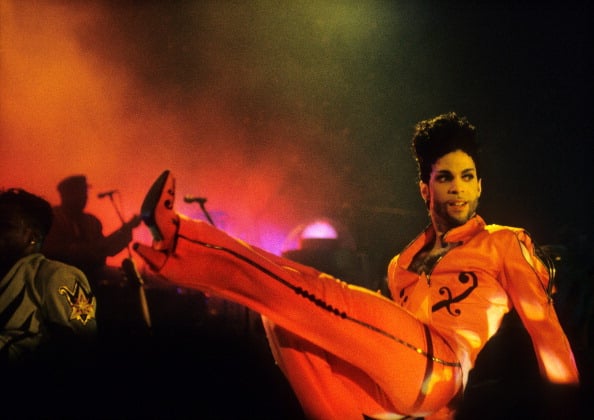 Prince performed on stage at Ahoy, Rotterdam, the Netherlands in the summer of 1992. He wore a monochrome yellow pantsuit with matching platform platform shoes. The garment had embroidered detailing on the torso of the top, the side paneling of the pants and exposed shoulders. 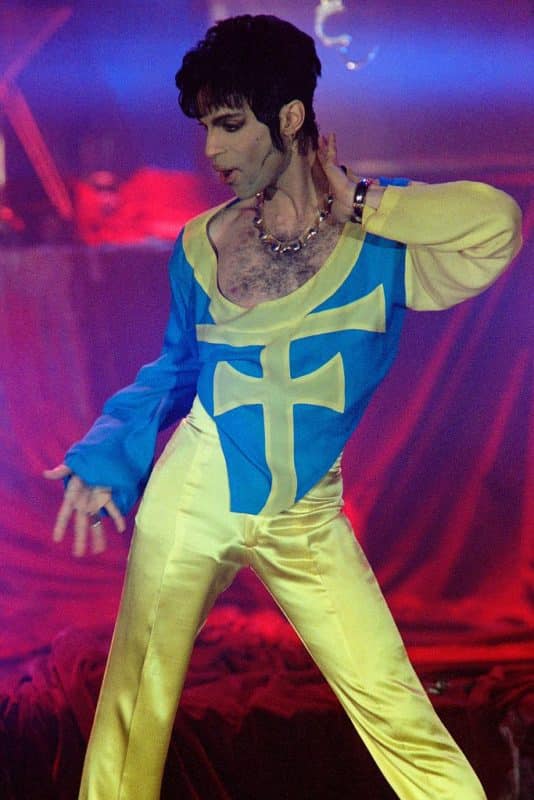 On May 4, 1994, Prince performed “The Most Beautiful Girl in The World” at the World Music Awards ceremony in Monaco. He wore yellow satin pant with matching platform shoes. He donned a low-cut turquoise top with his symbol as the neckline and torso with exaggerated sleeves (one of each color). He accessorized the look with a gold bike chain with blue jewels and a chunky gold bangle. 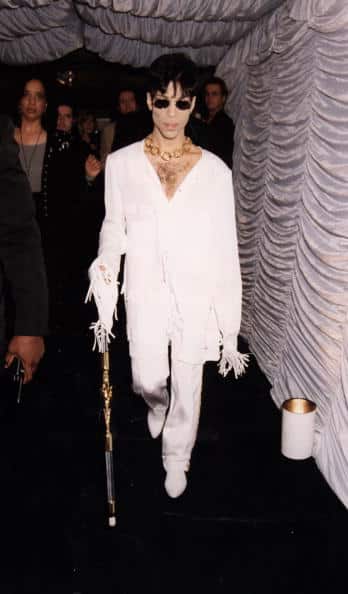 Prince appeared at the Roundhouse in London in September 1994 to launch the VH1 music channel in an all-white number. His top feathered elongated and fringed sleeved. He accessorized the look with a gold cane, gold-rimmed shades and gold-linked choker. 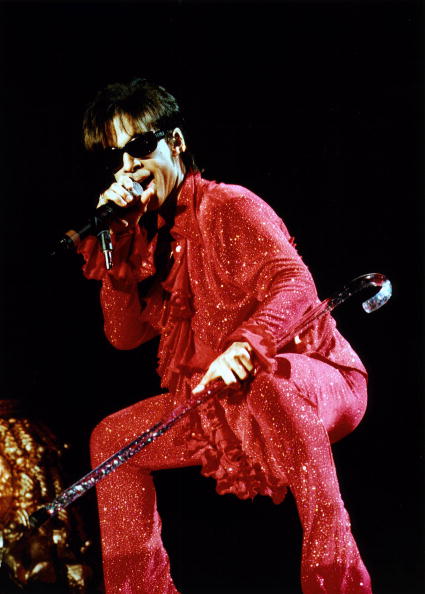 Prince performed at the Netherlands stop of his Newpower Soul Tour in a red ruffle and glitter two-piece outfit. He paired the ensemble with dark shades and a clear cane filled with confetti.

The Artist Formerly Known as Prince 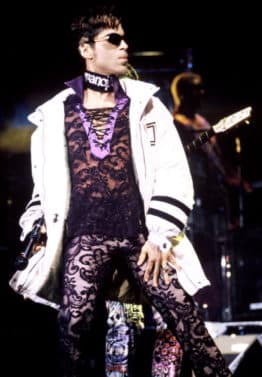 During the 1990s, Prince changed his name. The Artist Formerly Known as Prince stepped out for a performance at the San Jose State Event Center on April 19, 1997, wearing a violet-hued lace number that was very revealing. He wore an oversized white jacket and a chunky choker that read Emancipation. 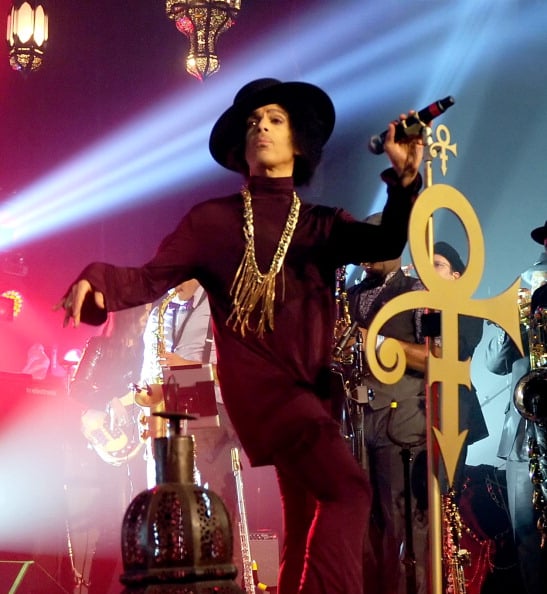 In his later years, Prince traded in his pressed hair for an afro. He stayed true to his monochrome outfits, appearing for a performance in a plum-hued turtleneck blouse, bell-bottomed pants with a wide-brimmed hat and gaudy gold chain.