Photographic artist Sheila Pree Bright calls herself “very shy, very introverted”. A textile design graduate, she acknowledges, “I took a photography class my senior year, and that allowed me to speak.” As a part of her process, it’s important for her to speak, in Sheila’s way, with her subjects before the camerawork.

Naive in hip hop culture, her first models were men, rappers in Houston’s Third Ward where the music was being created. “I didn’t grow up around Black people, so I was curious about the culture and the rappers.” After hanging out to a level of trust between them, she shot Rap-A-Lot Records promotional photos, all Black & White film. It was the 90s.

Photographing for Rap-A-Lot and other independent record labels, she found herself in various spaces, often the sole woman with 12 men, AK-47s, and machetes. “I said, are these guns real?”, she recalls. “They said where do you come from? You’re like a white girl in a black body.  I think because of my naivete and not having fear, they took me in.”

An artist friend of hers saw the photographs and had a curator of fine art over to see the work. She remembers, “I didn’t know anything about the art world, shows or exhibits. I didn’t even know what a curator was at the time. I didn’t know what an MFA was!” The curator, David McGhee, was surprised by the intensity and authenticity of the work— portraits  of Black males from the Third Ward. She got her first show.

Extremely shy, “I didn’t go to the show. I didn’t understand why I had to be there. A picture speaks for itself.” David called; the people wanted to meet the brave woman in these male spaces. Convincing her, when she arrived, people were waiting to talk to her. “I am self-taught. The work I did with HipHop culture laid the groundwork for the work I’m doing now.”

When Trayvon Martin was murdered, Bright thought, “What makes change?” Activists, protests, the passion of young adults. From 2013 to 2017, the lenswoman was on the plane, off the plane—from Atlanta to Ferguson to Baton Rouge to Baltimore photographing protests. “It’s important for me to do that as a Black woman because we’ve learned of ourselves and seen ourselves through the eyes of colonizers.”

The Rebirth of Us

Commissioned by HBO to do an art piece for Atlanta’s Missing and Murdered: The Lost Children, Bright had to do her research. She admits, “I’m not from Atlanta, I didn’t really know enough about it.” She found that 32 children were murdered; she also thought of the children of that time and parents fearing for their children’s lives . Compassionately, she realized, “Generations can be traumatized without realizing it. I wanted to create something uplifting. I started looking at the landscape. We’re in a new decade. I decided to photograph a woman and use the sunflowers to represent new beginnings.”

“I remember in graduate school, a white woman said the first time she saw BET she thought it was soft porn. I started thinking about black women and how we felt about our bodies.” Through digital collaging, Bright started a body of work where she asked Black women, many from the strip clubs, to come to her studio. She talked to them about sexuality and then she would photograph them. She learned about Saartjie (Sarah)Baartman (Hottentot Venus) whose Black body was exhibited as a spectacle in London’s freak shows. Bright notes, “I started looking at the Barbie doll as this ideal standard of beauty in western culture that we do not fit.” Bright took parts of Black women’s bodies- locked hair, pursed lips, deep eyes and collaged.

In 2018,  when Bright was in grad school, she was attracted to the work of photographer Richard Avedon. “I was really down with his portraits. I found this image he’d taken in Atlanta in Vine City in 1963 of Julian Bond holding his son. I thought wow, I need to recreate that image with the mothers of victims of police brutality.”

While most of the mothers were from Atlanta, she flew in Eric Garner’s mother, Tamir Rice’s mother, Oscar Grant’s mother.  Creating a space to commune and speak, Bright says, “I rented out an Airbnb. We ate, we talked, we cried. I learned so much from those women. I did not realize the trauma within the trauma.” She continues, ” I will never forget Eric Garner’s mother, Gwen Carr said that other mothers victimized in the same way, would ask, what makes your child different from mine?”

Sheila took them to the same location in Vine City; an unforgettable experience for the subjects and the photographer. “When Eric Garner’s mother held out her hands, I knew that was the image.” As Julian Bond holds out his arms with his baby, Gwen Carr holds out her arms, childless. Juxtaposed, two 30 feet tall murals, project commonality and contrast. Bright explains, “I call this Mothers March On because these women are now activists and city council members.” And due to extreme circumstances and Bright’s brilliant mind, they are fine art.

Bright says, “I’m trying to get people to really listen to these images.  Art has a way of opening up these hardcore issues.” The artist calls the deep dive into the opening, brave spaces. She adds, “Not safe spaces, but brave spaces.” 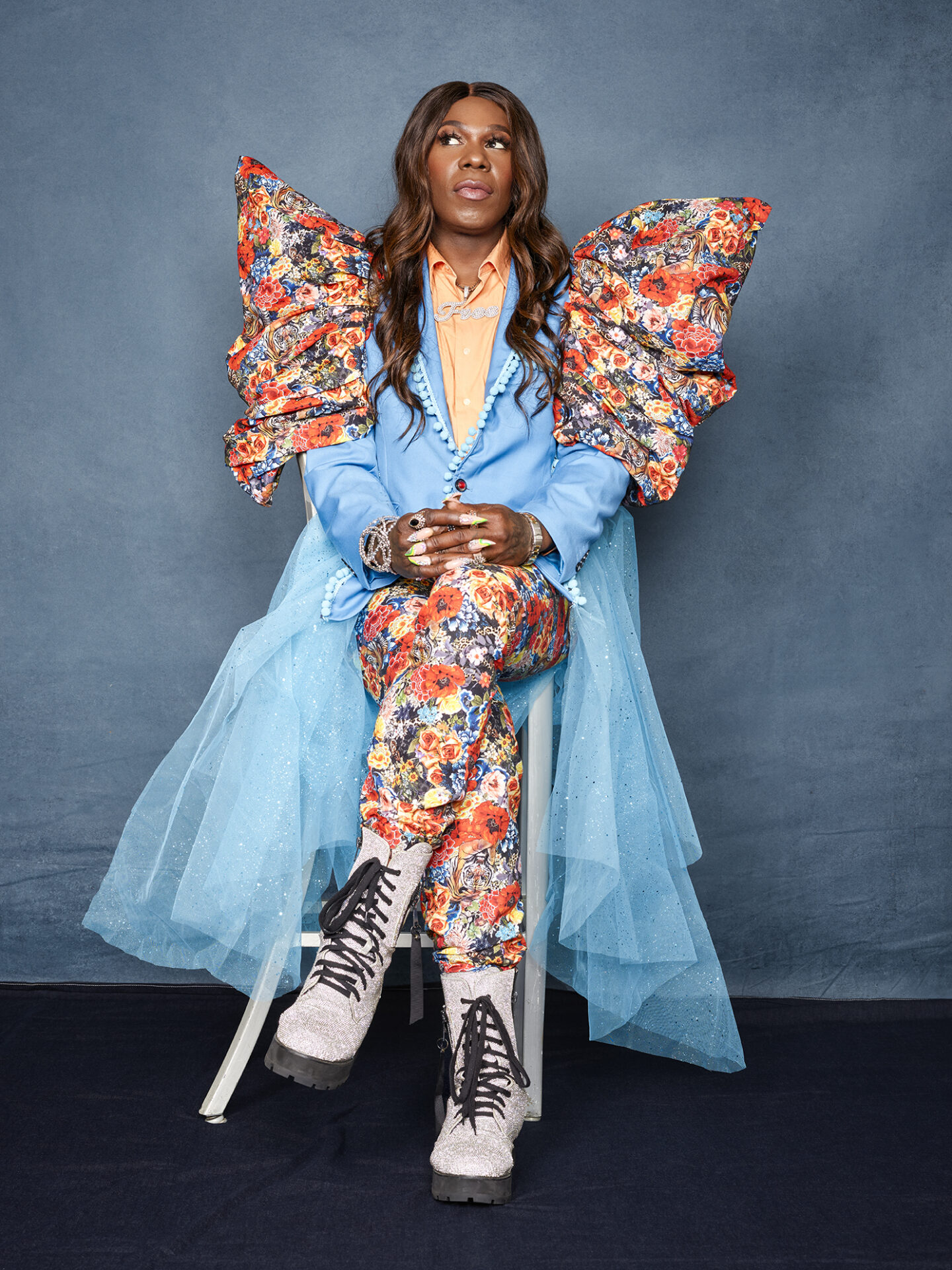