There are few universal truths that relate to hip-hop. Ask 10 people to name the top five rappers, and be prepared to get 10 different answers.  Which area really matters more—the East Coast where rap was born, or the South, which taught the genre a new language?

One of the few artists who transcends most debates on hip-hop greatness comes from rap’s physical and spiritual middle ground. It was Chicago, the cultural cross section of up-North swagger and down-bottom country grammar, that birthed the only emcee to almost seamlessly emerge from the hypermasculine, malt liquor-soaked boom bap of the early 1990s into the genre-redefining Soulquarians movement. Today, he finds himself  both a rap god and a Hollywood powerhouse.

As he prepares to release his 11th studio album, it’s fair to say that Common (né Lonnie Rashid Lynn Jr.) may be the greatest living representation of hip-hop’s growth over the past two decades. How many rappers get love in the streets and the coffee shops, not just because they’re good at what they do but also because they represent an equal measure of street nigga and poet laureate? How many have reimagined themselves as actors without reinventing themselves at the cost of their music?

To truly understand that middle ground in which the 44-year-old and his music reside, one must consider Common’s hometown and the culture that helped raise him. As he writes in his 2011 memoir, One Day It’ll All Make Sense, it’s “Chicago Blackness [that] gave me understanding, awareness, street sense and a rhythm.”

As a daughter of Chicago, I would not have been able to rest if anyone else had been given the assignment to interview Common for EBONY, a publication also born in the Windy City. A competent journalist can conduct an interview with a can of paint, sure, but “Chicago Blackness” is a language that is easily lost on those not fluent.

Through his publicists, it is decided that I will meet with Common at Otium, a hip Los Angeles restaurant the day before his cover shoot in Marina del Rey; his team, however, requests that I not be present for the shoot to avoid making him feel like he’s under a microscope.

I worry, therefore, that he’ll show up at the interview with one of his reps, an assistant or maybe even an entourage.  As I wait for him, I rehearse a speech: “I’m not from TMZ. I’m not interested in getting dirt on any famous ex-girlfriends or Kanye West … but I don’t think this conversation is going to be as rich as possible if we have an audience.”

Dressed in head-to-toe black, Common rushes into the restaurant. Alone. He’s both apologetic for his tardiness (due to a flight delay) and tickled by the idea that he’d show up with anyone else. He also has a speech for me: “I want this to be the best possible story for both of us because it’s a reflection of you as a writer  and of me as a man. Whatever you need to make that happen, I’m here.”

This is my opportunity to snitch about his people trying to keep me from the set, of course.

“Really?” He strokes the back of his head. “Well, they’re protective of me. They just want to make sure I’m comfortable.”

Speaking of comfortable, Common mentions he’d prefer to skip dinner and go for a ride—he loves highway driving—so he could play new music and rap for me.

As we head up Interstate 110 in his sleek late-model black Range Rover (a far cry from “Cruising South Side streets with no heat and no sticker,” as he rapped on the title track of 1994’s Resurrection) the “protective” comment begins to make sense.

Common has a disarmingly kind, giving spirit, one you’d be inclined to call “gentle” if he weren’t such an alpha male otherwise. Without hesitation, he gives a few crumpled $20s to a young panhandler who approaches the truck at a red light, happily poses for a selfie with an older brother when we stop at a gas station and offers warm greetings to the many people who recognize him throughout our drive.

Unlike other celebrities who, even if polite, command a level of deference to their stardom, Common is an old-school gentleman. He helps me in and out of his truck, opens every door for any woman passing through and apologizes the one time he walks through first. Over the course of the two days I spend with him, I wait for the Hollywood moment—that is, the slightest hint that any of the fame has gone to his head.

It does not happen.

The man known to his friends as “Rash” credits the Windy City with helping keep him grounded. “You can go acting like you’re better than someone because you made it or like you forgot where you’re from if you want to, [but] you can get your card pulled real fast in Chicago,” he says, laughing.

The bonds he formed on the South Side can’t be lost to famous friends, red carpets or busy schedules. “Even if I only talk to them once every month and half, two months, there’s just an honesty  there,” he says of his longtime buddies. “When I need to discuss things going on in my life, there won’t be a motive.”

His friends can count on the same loyalty. “If you have a convo with Rashid, his heart is always in the right place,” says Anthony Khan. The DJ and producer, best known as The Twilite Tone, grew up with Common and was one of his first musical collaborators. The two experienced a period of estrangement during the late 1990s (over “naiveté” about the music industry, according to Khan) but would eventually reconcile, due in part to  Common’s commitment to staying true to his folks. “If he does something that rubbed you the wrong way or hurt you, he’ll take responsibility for his actions.” 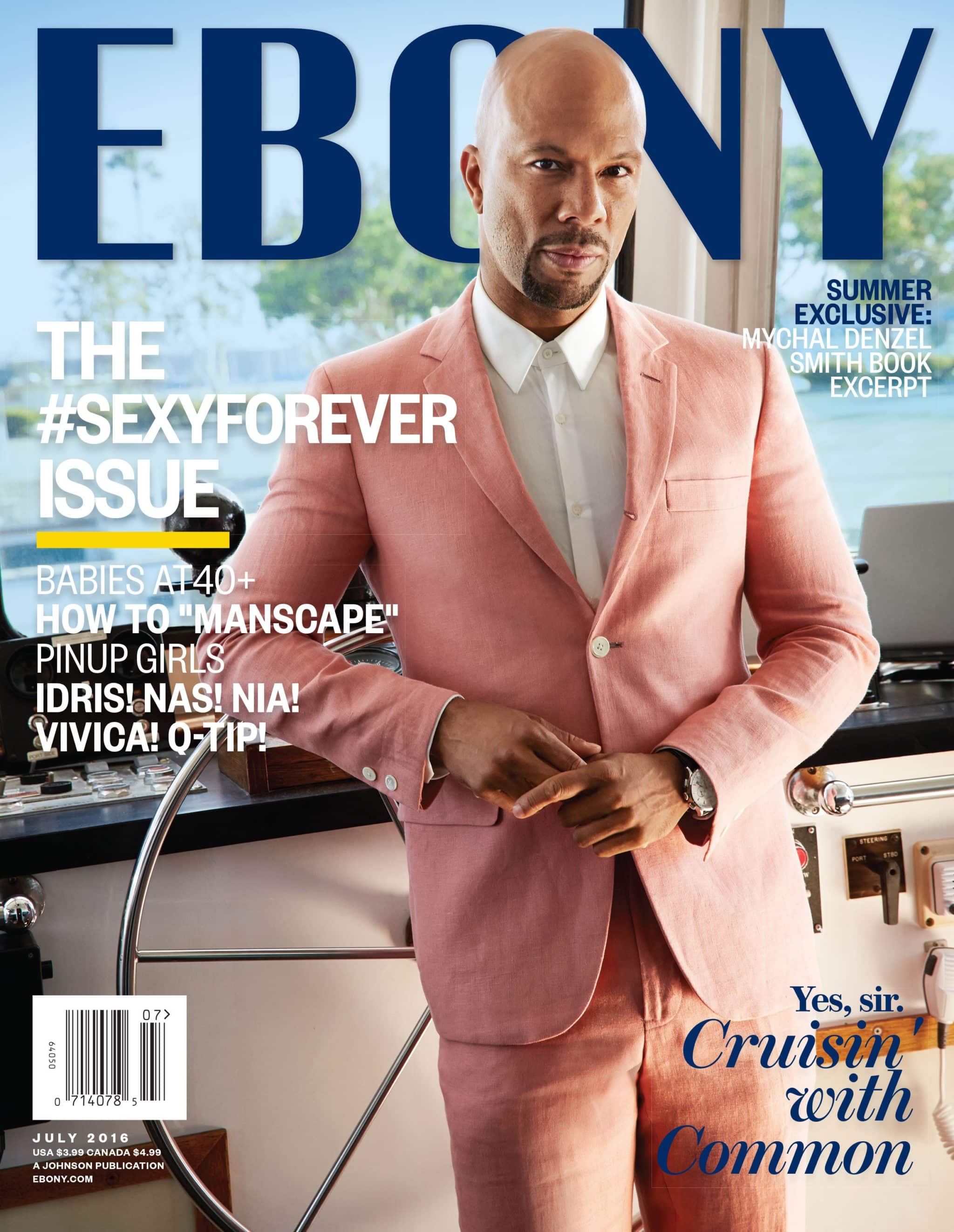 Chicago hip-hop fans had been supporting Common for years when he had his official “blowing up” moment via  2000’s “The Light,” a Bobby Caldwell sample-driven ballad that is his highest-charting single to date; it was a different love song, however, that would provide his first classic record in 1994.

“I met this girl when I was 10 years old/And what I loved then, she had so much soul,” he rapped on “I Used to Love H.E.R.,” an ode to hip-hop that would help trigger a brief beef with Ice Cube because of an unintentional suggestion that the music’s expansion to the West Coast in the early 1990s would take a toll on the genre.

After trading a few musical jabs—“The Bitch in Yoo” would probably scare some of the chamomile tea and yoga loyalists who came to Common later in his career—the two rappers put their differences aside with the help of Minister Louis Farrakhan in 1997. Nearly 20 years later, we drive past a large billboard for Barbershop 3: The Next Cut, the latest installment in Cube’s successful film franchise, starring none other than Common as new barber Rashad.

With no less than 40 film and TV roles to his credit, including American Gangster, Smokin’ Aces, Luv and AMC’s Hell on Wheels, Common has a rapper-turned-actor résumé perhaps bested only by Cube, Will Smith and Just Wright-co-star Queen Latifah. Although the others may have eclipsed their rap backgrounds with tremendous success in Hollywood, Common is as much a rapper today as he’s ever been.

And even after 10 studio albums, a live record and two greatest-hits compilations under his belt, he’s as excited as an unsigned kid when he plays five cuts for me from Little Chicago Boy, his soon-to-be-released EP, even rapping to one track that did not yet feature his vocals. They are classic Common—thoughtful lyrics, social commentary (including references to Black Lives Matter and Sandra Bland, the 28-year-old whose mysterious death would be a rallying point for the anti-police violence movement), sexy love—with lush contributions from Robert Glasper and longtime collaborator Karriem Riggins, both known for their ability to marry hip-hop and jazz.

And don’t get it twisted because of his SAG card: Common still loves H.E.R., and his Hollywood reinvention has helped keep that flame lit. He credits acting with allowing him to be “more introspective and more free” as a rapper: “I’ve tapped into new things about me that I didn’t even know.”

It was a complicated time in his musical career that would bring him to Tinseltown in the first place.  “I started acting because after Electric Circus, I hit a ceiling. Like, ‘Where in hip-hop can I go that I can be free and be me without [somebody saying], ‘Aw man, why you doing this, why you doing that?’”

The 2002 album was his second outing with The Soulquarians, the short-lived, revolutionary Bohemian collective that included Erykah Badu, D’Angelo, Q-Tip, Yasiin Bey (then Mos Def), Talib Kweli, James Poysner, Questlove and the late Jay Dilla. It failed to match both the critical and commercial success of its predecessor, 2000’s Like Water for Chocolate.

Common is able to look back and see that the quality of the record lacked in comparison to its bravery. “I didn’t concentrate enough on songmaking,” he admits, but there are no regrets over the album or that moment in his career.

In retrospect, Electric Circus may have simply been ahead of its time. “That album was nothing but a precursor to what the standard of music is today,” says Questlove who served as its executive producer.  “Without any backstory, people would think, ‘Rashid just started dating Erykah [Badu], and now he’s wearing crocheted pants.’ No. We were watching Sly and the Family Stone concerts ad nauseaum, creating at least 90 hours worth of material for an album that was maybe only 60, 70 minutes.”

When reflecting on meeting Common back in 1994 (“Think of the rapper stereotype you might see on Saturday Night Live. He had a 40 in his hand, he was slurring his words. The only thing he was missing was a gun”), the Roots bandleader says his friend’s growth as a performer is completely organic.

“I’ve been privy to a lot of conversations with artists talking in a desperate tone about how they need to switch things up: ‘You know how these kids are today; I got to speak their language.’ You can’t say that about Common’s chameleon-caterpillar-butterfly evolution, and I know because I was pretty much there every step of the way.”

Read more in the July 2016 Issue of EBONY Magazine.