EXCLUSIVE: Dennis Haysbert Talks 'The Dark Tower' & Why The Film is So Thrilling

From President David Palmer on the cult classic series 24 to the booming voice of Allstate commercials, Dennis Haysbert’s filmography is a massive work spanning nearly four decades. It’s apparent to anyone following his projects that the California native has no plans of slowing down. With his role in the adaptation of Stephen King’s massive saga, The Dark Tower to his upcoming Netflix film Naked where he stars opposite Marlon Wayans and Regina Hall, Haysbert is in high demand.

In The Dark Tower, Haysbert stars as Steven Deschain, a gunslinger and father to Roland (Idris Elba) the last of the gunslingers whose thirst for vengeance causes him to abandon the one thing he’s sworn to protect. Recently, EBONY.com spoke with Haysbert about his role, why the cross-genre work intrigued him and what he’s looking forward to next.

EBONY.com: Did you read Stephen King’s series before signing on for The Dark Tower?

Dennis Haysbert: I did not read the script. Actually, I had not read the books. I just took the role based on Stephen King, and the actors that I was going to be working with. So it was a small leap of faith. It worked out great. Working with Idris and Matthew [McConaughey] was really fun.

EBONY.com: King’s series took 30 years to write, and it spans over the course of eight novels. There has been a lot of discussion about the fact that the gunslingers were cast as African-American. Have you dealt with any of that pushback, or read about it?

DH: It’s like this. Everything is altered. There have been a lot of roles that were written for Black actors, and white actors have played them. During the course of my career, I’ve changed a number of roles that were written one way, and they decided to go with me. I think they just went with the best actor for the job, and thankfully they picked Idris. Therefore, they had to choose a Black man to be his father. As of yet, I have not had any pushback. I did see a few things that came across my Google Alert that spoke about the fact that the character is not white. I think it just adds a different texture. If Stephen didn’t like it, he wouldn’t have signed off on it, and if he thought it mattered that much, he wouldn’t have signed off on it.

EBONY.com: As you got into the story, learning about the Gunslinger’s legacy and the Man in Black, what intrigued you the most about this massive storyline?

DH: I’ve always been a big western fan. These characters are kind of like, for the sake of comparison, Jedi Knights with pistols instead of lightsabers. That sci-fi aspect of it mixed with the western aspect was intriguing to me. I’m a big sci-fi fan, so I love the idea of it. 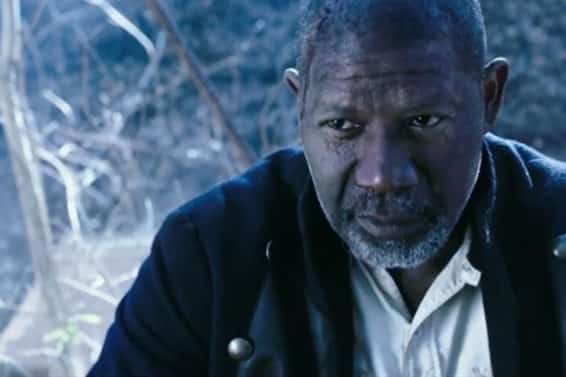 EBONY.com: You spoke about The Dark Tower being both a western and a science fiction film —it’s also a family drama. Why is this mix of genres so thrilling?

DH: It’s different. It’s exciting because it’s a great story, it has those two components to it— sci-fi and western. Very rarely do they combine the two where it actually works. For instance, I loved Cowboys and Aliens. I don’t necessarily like the title that much, but I thought the movie was fun and plausible. If it’s plausible in an interesting way, then yeah, go for it. There are no new stories, so we have to think of more creative ways to tell these stories. If this is the way that someone figures it out and peaks the interest of the audience, then I say I’m all for it.

EBONY.com: The father-son story stands at the center of this film, and it’s not just the story between Steven and Roland, but between Roland and Jake (Tom Taylor). What did you think about the director and screenwriters centering The Dark Tower around this relationship?

DH: I think it was great to put it around that relationship. I think it had a lot to do with the fact that I was [Roland’s] father, and he doesn’t have any children, and this boy just came into his world, and [Roland] took him under his wing. I think it works for the film

EBONY.com: Along with The Dark Tower, you have Naked coming up, and you did Shots Fired earlier this year. How do you decide which roles you want to take on?

DH: It has to do with the script and who’s involved. I absolutely love Marlon, so that was just fun to do. I like the character, and working with Regina Hall, who is hot right now with her new movie. I think about that, and I say, “Well, this is really great.” That’s what I look for. I look for the people that are working in it; I look at the script, I look at everyone involved. But mostly it’s the story.

EBONY.com: Is there any genre that you haven’t been a part of yet that you want to be involved with in your career?

DH: I’d like to get into the superhero genre. I’d love to do either a DC or a Marvel character. I just love the way they’re approaching these characters in these films. I also would love to get back into some romantic films. I love romance films, especially between people of color, because we don’t really explore that enough. I would love to do that.

The Dark Tower is in theaters now.