Diallo Riddle has done it all. The Emmy and WGA-nominated writer, actor, producer, showrunner and DJ is a multi- threat who has his hands and mega-talent in various facets of the entertainment industry. With his latest role as Stevie, Marlon’s best-friend on the upcoming Marlon Wayans series Marlon, he’s stepping into the spotlight in a major way. “For both creative and longevity reasons, it’s helpful if you can be a member of all the guilds, ” he told EBONY.com. “There have been projects that I was the writer and star of. There were plenty of projects where I was just the writer and Marlon is one of those projects where I’m just an actor.”

Riddle’s acting credit on the series, didn’t mean he was confined to what was provided in the script. With Wayans at the helm, the former Late Night with Jimmy Fallon scribe was able to lend some of his own ideas to his character. “Marlon especially inspired improvising actors. There were plenty of times that after we got the script, we’d always do what we called take three where we went completely off script and just did whatever we thought was true to the emotions of the scene. [It was] just completely free from the dialogue on the page,” he explained. “That was tons of fun. I got to write in that capacity a few times on the show. That was always a blast.”

Despite the payoff, Riddle’s role in Marlon happened purely by chance. The Last O.G. scribe gave EBONY.com the exclusive. “After four years of the [Late Night with Jimmy Fallon], we were approached by producer Lorne Michaels. He said, ‘I heard you guys want to do your own show,’ Riddle explained. “We pitched the show to HBO. They bought the pitch. We made a pilot. We went to series. There was some executive change, and the series order was pulled back. That was a crushing, crushing blow. It haunts me to this day, but here’s how you know that sometimes things are just meant to be. Marlon was having trouble casting the role of his best friend for this NBC show. Someone showed him our HBO pilot, and he was like, ‘Yo, that’s the dude. That’s the guy I want to play my friend.’ It was the first victory after that HBO setback, so it was a huge day in the Riddle household.” 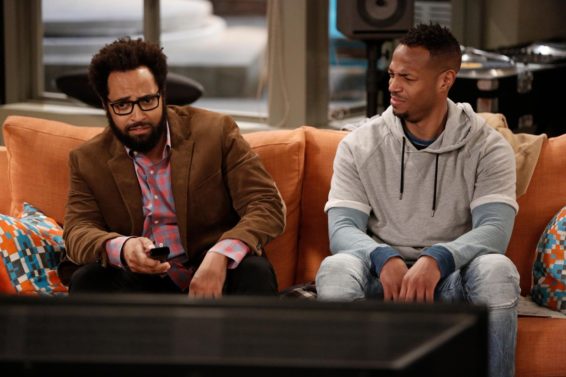 Moving into primetime sitcom territory from the HBO comedy series Silicon Valley has taught the Harvard University alum a great deal about himself. “I’m really big on instant gratification,” he explained. “When you work on Silicon or any of these single-cam sitcoms, you hope that you might get a repressed snicker out of the camera guy or the grip, but that’s all you get. When you work on a multi-cam sitcom, it is so much fun, that’s what I mean by instant gratification, to say a line, get that immediate instant reaction from the audience and know, ‘Oh, that line really works. I’m going to do it even bigger next take.’ There’s nothing like being on a sitcom; it’s its own type of drug. I think I might be addicted to it.”

Marlon isn’t just fascinating because it pays homage to the multi-camera sitcoms of the ’80s and ’90s, its narrative, which shows divorce in a more uplifting light is also especially compelling. “I think that because so many marriages end in divorce, sometimes people do take, for better or worse, their blueprint from the things that they see around them, ” Riddle said. “I know that The Cosby Show had a huge effect on guys my age because we all wanted to be a family man. TV is a medium that you let into your home. It’s a medium that can have a big effect on the way people sort of see the world. I think in this case, Marlon’s taking from his personal life, where he did try to have a child-centered divorce and say, ‘Hey, look, it worked for me, it can work for not everybody, not all of us, but a lot of us.’ I just think it’s a really positive show.”

With two incredible projects underway, Riddle doesn’t plan on slowing down anytime soon. Not only is he striving for a season two with both of his sitcoms, he’s also working on a Chicago-based project. “We’re doing a show about two characters who graduate from Kennedy-King College, and it’s a show that shows that there are people on the South Side, ” Riddle told us. “Our current president said something like he wants to send in the troops to Chicago, which is just more of that stuff. Our show shows that what you’ve heard about the South Side is not everything the South Side is about. There are people down there who are great and funny. We don’t try to sugar coat it. We don’t pretend like these characters have a lot of money. We don’t pretend like they even have a lot of opportunities, imagine Trailer Park Boys” set on the South Side of Chicago, with actors who actually live on the south side of Chicago.”

We’re sure we’ll catch this series on Comedy Central starring Get Out‘s Lil Rel Howery in the near future. Until then Marlon hits NBC Aug. 16 at 9 p.m. ET.