Erica Ash is a busy lady. Fresh from an appearance at American Black Film Festival and in between press stops and filming for her hit series Survivor’s Remorse and Real Husbands of Hollywood, it’s clear the comedian is not about to miss any opportunity that comes her way. “I will suck it up. We will get rest after,” she says thinking wistfully of her upcoming day off. With Survivor’s returning for a fourth season Aug. 20th, Real Husbands premiering in the fall and two holiday films on the way, Ash doesn’t even have the time to contemplate sleep.

Survivor’s Remorse follows NBA star Cam Calloway (Jessie T. Usher) whose personal life gets thrust into the spotlight when he signs a multi-million dollar contract with the Atlanta team. On the series, Ash plays M-Chuck, Cam’s big sister whose bold personality paves the way for tons of laughs on the show. It’s not all sh*ts and giggles on the dramedy. Last season saw M-Chuck reeling from a revelation about her paternity which has the potential to affect her relationship with her mother Cassie (Tichina Arnold) forever. Ahead of the season four premiere, EBONY.com sat down to chat with Ash about the forthcoming season, why she plays as hard as she works and what’s next for her.

EBONY.com: Last season on Survivor’s Remorse there was the shocking revelation for M-Chuck concerning her paternity. How did that revelation affect you and they way that you approached playing that character?

Erica Ash: Well, you know, I think it’s a shocking revelation for anyone to have to deal with, obviously. I wanted to be a little bit more reverent about that. I know it’s a dark comedy and we really do go there when it comes to the funny stuff. But this is one of those things where I wanted to approach it with a little bit more reverence. That’s the route I chose. Now obviously, I can find funny things around that. I do think there are a couple of jokes in there that I made that involved that. [However], the overall theme [and] overall energy, that I have is a bit of reverence for what happened. You’re gonna get the classic M-Chuck jokes because it wouldn’t be Survivor’s Remorse if there weren’t some dark comedic jokes about the subject matter in the show. I think you’re gonna see a little bit more humility with M-Chuck when it comes to her dealing with this.

EBONY.com: M-Chuck and her mother Cassie have always had a strange relationship, and this discovery will certainly affect them even further. Did you and Tichina have a dialogue or conversation about your characters’ relationship moving forward?

EA: No, we did not. I think that both of us were so overwhelmed by the revelation. It was just about making sure that we played that and gave it justice. You know what I mean? Because it’s so heavy, it’s one of those things you don’t want to compromise the integrity of it or jeopardize the weight of what we are doing in this moment by focusing on something so far in the future. It’s almost like, in real life, if you were to have to deal with such a dramatic thing, you wouldn’t be thinking “okay so what am I going to do next year.” No, all of your energy is focused on what this huge thing is. I don’t know that we thought about all of these things, when we didn’t have this conversation, or if we were just naturally wrapped up in what it was in the moment. I think that either way that’s the way that it should’ve been handled. I’m glad that we chose to focus on this huge story point in front of us, rather than look forward. 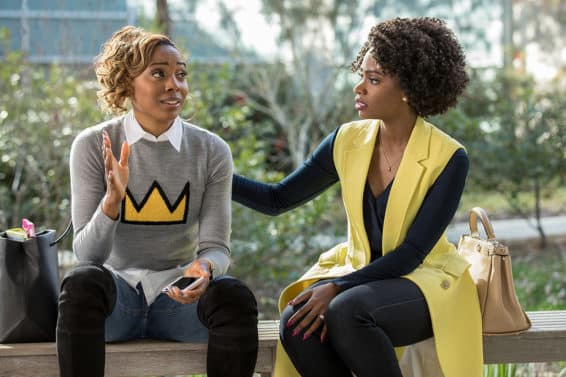 EA: Watching everyone grow, including myself. This show provides an amazing opportunity for actors to stretch all of their muscles. I’ve gotten the wonderful opportunity to develop a character that was already presented to me so well developed. That’s done wonders for me as an actor, and it’s certainly done wonders for [M-Chuck] as a character. I think the choices that I’m making are relatable enough to keep the audience wanting to know more about her story and wanting to be invested in her, and invested with her as she goes along her journey. That’s what’s been most rewarding. As an actor in my career, my main objective is to do as much new work that pushes me and challenges me as possible, and I’ve been able to find that in this show because our writers write epic stuff and we get to play it every week.

EBONY.com: Survivor’s Remorse isn’t the only show you’re working on. You’re also doing Real Husbands of Hollywood which returns this fall. What has been the best part about playing Bridgette for you and playing off of Kevin Hart’s comedic flair?

EA: You know, they say you gotta work hard and you gotta play hard. That’s my play hard role. With M-Chuck, I think about her, and I want to put in subtle nuances. Bridgette is just one of those characters where I can just go in and play the whole time. That’s what’s amazing about it. They’re super open to the choices that I come up with. It’s basically a game of improv. It is fully scripted, don’t make any mistake there, but it’s just one of those things where I can go into a room and just scream. Sometimes the pressure of work and everything gets to be so much; you just need to go somewhere and scream. That’s the role that’s like the equivalent of my scream. I will say the words on the page, I will do what they tell me, and then they let me go. I can risk and go until Stan [Lathan] tells me to just sit down somewhere. A lot of it is often used in the show  —which I think is great. There’s quite a bit more creative license, and I think it’s just the nature of the show.

EBONY.com: What’s next for you? I know you have two huge film projects coming up. I’d love to know more about them if you can give us a few details.

EA: I will tell you I’ve got two Christmas movies that I have coming up that I shot the week after Survivor’s Remorse. It’s been a busy season for me. I went straight into production for a movie called Miss Me This Christmas. That movie was actually cross-boarded with another Christmas movie called, You Can’t Fight Christmas. Those movies are filmed primarily at one location, and then our casts kind of intersect. Brely Evans who’s the star of the other movie, she cameoed in mine, and in turn I cameoed in hers. It’s a really cool way that they intertwine two completely different stories. I haven’t seen that done before, and I certainly haven’t done it. I wanted to be a part of that because that’s magic. It pushes me in another way. It was a very unique concept, and I was excited to be a part of it. I believe they come out this Christmas. We don’t have a date yet, but it’s gotta be the holiday season for sure.

The fourth season of Survivor’s Remorse premieres Aug. 20 at 10 p.m. ET on Starz.