Underground fans will certainly recognize Rayan Lawrence as Elliot, one of John Brown’s militant abolitionists, but now, hip-hop heads and Tupac fans are about to see a completely different side of the Brooklyn, N.Y. native. The actor is portraying Treach, the lead rapper of the acclaimed group Naughty by Nature, in the Tupac Shakur biopic, All Eyez on Me. Directed by Benny Boom, Eyez has been a long time coming, and fans will finally get the opportunity to see the legendary rapper’s fascinating life on the big screen this weekend.

Ahead of the film’s debut, EBONY.com spoke with Lawrence about his role, what he learned about Treach and Tupac’s friendship, and why this is once-in-a-lifetime role.

EBONY: All Eyez on Me is finally headed to theaters. How did you get involved with the project?

Rayan Lawrence: I had done a couple of movies before with the casting director, Winsome Sinclair, and she called me and said, “Hey, I want to put you into the role of Treach.” So I went in, I guess I did a good job, and a couple of weeks later they let me know I got the role.

EBONY: Wonderful. So how much did you know about Naughty by Nature and Treach’s relationship with Tupac before signing on for the film?

RL: I knew a good amount, ’cause I followed Naughty by Nature, Pac and Treach. I saw them when they were both in Juice, and when they did one of the soundtrack songs for Juice. Then it was just about going back to do research for the role, and I found out that they were really really tight. Once you do your research, you start to see how far back they went, doing freestyle together and doing underground spots with Biggie [Smalls] and everybody.

EBONY: What type of research did you do for the role? Did you speak with Ernest Dickerson, the director of Juice? Did you look up YouTube videos?

RL: I looked up a lot of YouTube videos. I googled “Tupac and Treach.” I pretty much listened to every one of Treach’s songs back in the day, just going back and getting the whole flow, the whole feel. I looked at Juice again just to see his movements. We had the luxury of having Money-B from Digital Underground, who knew Treach and also knew Tupac, [in the film]. He plays himself, so he was able to give us some insight. That was also within the research. But it was amazing going back, just seeing his swag, you know what I mean?

EBONY: For sure! Were you apprehensive at all about playing someone who is actually a living person? I know it’s very different from playing a fictional character.

RL: Yes. It’s definitely hard because what I wanted to do at first was try to get in touch with Treach because he’s still alive, to get with him and try to see what info he could give me from his past, and try to portray that on the screen. But I didn’t have that luxury. But yeah, to play someone living I think is a bit easier because you’re able to do that research and find out multiple things about him than when you are creating a character who’s not real; then, you just have to pick and choose how to bring your personality into it. So with the Treach role, I tried to not bring myself to it and just tried to be him as much as possible. 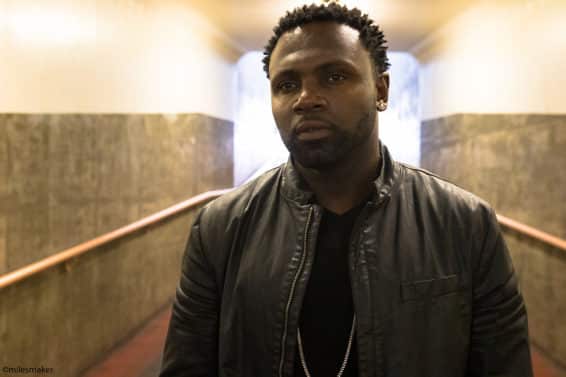 EBONY: Now, I know that All Eyez on Me went through a series of directors before Benny Boom. Were you able to talk with him at all about what his direction was, especially because he comes from the music world?

RL: We didn’t get to talk in detail about that. I had already seen his vision just in his mindset on set. You already knew; you never needed to ask him a question. He was ready for it. You saw that fire in his eyes for it. So we didn’t need to really discuss that, and I think he was pretty much the right director for it. When it’s all said and done, he’s been in this game for a really long time in the music world. So he was exactly the right guy; he worked with Pac, and I think he was just perfect.

EBONY: Do you feel like the movie got the look and feel of the ’90s correct?

RL: Yeah, they did get it correct. Just look at the baggy jeans Treach used to wear. Remember how baggy he used to wear his jeans? And the Tupac hairstyle, when he had the–what did they call it back then?–slope, or something like that.

RL: And other things, even the shirt that he had, ’cause remember, The Cult of Nine was huge back then, so they were able to get Cult of Nine stuff and just everything around it. The graffiti has that ’90s look.  I am a big fan of the ’90s, so for the set designers to prepare and have us just feel that way, it was amazing.

EBONY: In your opinion, was the hardest part about playing Treach and working on the film?

RL: I think the hardest part, initially, would have been to rap.  I’m first generation Jamaican, so I’m more into the reggae culture, not into hip-hop. I kind of felt this was God-made a role for me because before I even knew I had the audition, I saw a friend of mine freestyling, and I said, “Let me start freestyling with you.” So I started doing it every day. That was months before I even heard about this role. The next thing you know, when Winsome called me, I’m in the scene freestyling. I’m like “Wow, this is crazy.” So I’ve been preparing, flow and freestyling, and I got the preview to put that together. I was able to freestyle, and I’m learning how to do bars at the same time. Doing my research.  [But now,] I think the most difficult part was not being able to meet Treach before I shot the film. I really wanted to get to know him so I could try to embody him more. I mean, you could kind of feel that he gave me his blessing because he was the one who sent Benny Boom the freestyle for me to use in the movie, the night before I shot my rap scene, so that’s amazing.

EBONY:  You couldn’t ask for anything better than that. I know that you’re in Pimp, and you did Barbershop: The Next Cut. What’s next on your plate?

RL: We just finished up Underground, which is an amazing show that was on WGN America [but has been cancelled]; I had a recurring role as Elliot. I’m waiting to see what happens with it, if it will get on another network. I have a couple of projects right now that I’m in talks with, under wraps, in predevelopment. But yeah, Pimp will be the next project.

EBONY: We’ll definitely look out for it. Thank you so much for chatting with me, and I’m so excited to see All Eyez on Me and for everyone to finally see this huge project that you guys have been working so hard on.

RL: Thank you so much for having me on here, and I hope you enjoy it.

All Eyez on Me premieres Friday, June 16.