Yvette Nicole Brown can do comedy in her sleep. The television veteran has been in several series, including Community and The Soul Man, and even starred in BET’s The New Edition Story earlier this year as Michael Bivins’ mother, Shirley Bivins. Those credits are in addition to her voice-over career, which includes Family Guy and Elena of Avalor. “I want to have a career that the whole family can sit and enjoy together. That’s always been my goal,” she explained to EBONY.com.

Brown’s latest role in the upcoming ABC sitcom The Mayor, about an aspiring rapper Courtney Rose (Brandon Micheal Hall) who runs for mayor in his California town in an attempt to get his music career off the ground. Unfortunately for Courtney, his master plan goes way left and he actually wins the election. Brown stars as his mother Dina, a feisty and determined woman who is desperate to see her son succeed.

Ahead of the series premiere, EBONY.com spoke with Brown about The Mayor; how Dina differs from her beloved Community character, Shirley; and how she’s killing the voice-over game.

EBONY.com: What brought you to The Mayor?

Yvette Nicole Brown: I heard about the role, but I was still on The Odd Couple, [which at that point] hadn’t been canceled. I was like, “Well, that sounds like a great role for somebody, but it’s not for me,” because I was already on a show. As pilot season went on, my agent said, “You might want to think about The Mayor because it’s not looking good for The Odd Couple.” I took a meeting with Jeremy Bronson, our showrunner, and he explained who Dina was, how political the show would be, and how it would be just a wonderful opportunity for us to show a positive side of politics and a loving Black family. Everything about it sounded amazing, and I was like, “OK, I’m in.”

EBONY.com: How is Dina different from your Community character, Shirley?

YNB: Shirley is her own thing. I don’t think I’ve ever played a character like Shirley or ever will play another character like her. I feel like Dina’s a little more grounded. She’s had to struggle a little more than Shirley did because Dina’s a single mom, and she had her son so young. I think she’s more of a fighter, inherently, than Shirley probably ever had to be. I think they’re both beautiful women, but I don’t think they’re that much alike.

EBONY.com: The Mayor was conceived before Trump’s election, so it’s not a satire in any way, but how does it comment on our current political climate?

YNB: You know, I think the beautiful thing about it is that it shows what can happen when a novice has a heart for people. It’s not bad to not know what you’re doing when you get a job. If you have a heart to do what’s right and you get good people around you, you can learn, and if you’re humble, you can learn. I think our show is a great example of what someone with the right heart in the right position can do with help, and I think that’s what our series will show.

EBONY.com: Brandon Micheal Hall who plays your son, Courtney Rose, on the series is a relative newcomer to the entertainment world. What was working with him like?

YNB: I gotta say this: He may be new to the television landscape, but he is a Juilliard-trained actor, so he is running circles around me. He’s studied all the classics, and he’s just a brilliant actor. It’s so lovely to be able to walk with him through the beginning stages of his career because it’s going to be such a huge career. We all can see it for him, and we also have two other amazing new actors, Bernard David Jones and Marcel Spears. This is Marcel’s first television show. Bernard has been on the Tyler Perry Show, so he has a little bit of experience, but these three babies–and I call them babies–are young men just getting their first blush of all of it, and they’re getting to do it together. I can’t say enough about their character. They’re godly men; they’re gentlemen, they are professionals [and] they are open to learning. They go, “Yvette, what do you think about this? I gotta get a publicist. What should I do?” It’s just so nice to be able to see someone at the beginning, and I know 10 years from now they’ll be winning Oscars, Emmys, and probably no longer taking my calls. [Laughs]

EBONY.com: How did you and Brandon bond as mother and son?

YNB: We hung out down at ESSENCE Fest, and we tore up New Orleans. We got to spend a lot of time down there walking the streets, having dinner and hanging out. We really got to bond. We’re actors, so we could pretend to be a mother and son just fine, but there’s something about building an actual friendship and genuine love that the camera catches as well, and we’ve finally gotten to that place because we spent time together. 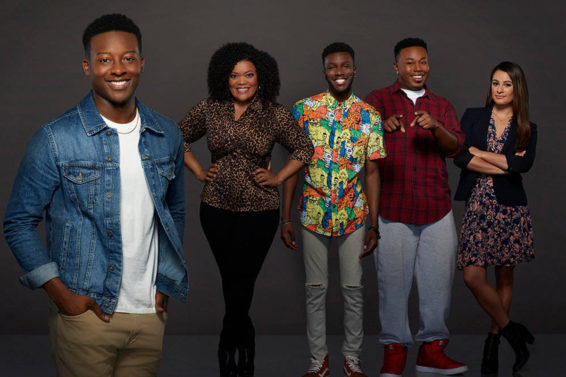 EBONY.com: Can you tell us a little bit more about who Dina is and what we can expect from her as the season continues?

YNB: She is a single mom. She had Courtney when she was 16, so they have basically grown up together. He’s her best friend, and vice versa, so there are times when she’s more of a buddy, and there are times when she cracks that whip and she’s his mom. I think Dina has a heart for her son, and she wants her son to do right. I always reference the fact that in the pilot, James Baldwin is on the wall in Courtney’s bedroom. It takes a particular type of woman to raise a man who would expect that level of wokeness and consciousness. Even though she had him young, she still raised him to be a man who cares about his people, wants the best for his people, and it’s going to extend now his community in Fort Grey, our fictional town. I believe she’s conscious, I believe she’s woke, but she’s still a little messy. She reads people’s mail when she’s working at the post office, and in private she gets a little feisty and she gets in trouble. There are things about her that still need to be smoothed out, but I think she’s got a good heart, and she definitely fights fiercely for her baby.

EBONY.com: What do you want people to take away from the series?

YNB: I would love for them to walk away with the idea that we all can do something right where we are. I think a lot of times people feel like it has to be a big splash. You could throw a tiny little pebble into water and have a ripple that extends for miles if you throw it right, so I just hope that the show makes kids, young people, start to think, ‘Well, what could I do in my school, or on my block or at my church to effect some change for everyone?’ I think sometimes we get into this mindset of, “I’ve got mine, good luck getting yours”; really, “I am my brother’s keeper,” is the way we really should be doing life. If we want to do life right, it shouldn’t be OK just for you to be OK. Everybody needs to be OK, so if you have something that is within your wheelhouse that can bless someone else or bless your community, roll your sleeves up and do it.

EBONY.com: What’s next for you?

YNB: I’m doing a lot of voice-overs right now. I’m on Elena of Avalor, a great Disney show. Disney’s first Latina princess. I play Luna. I’m also Lt. Valeria on Lego Star Wars: The Freemaker Adventures. Then I’m also Principal Waller on DC Super Hero Girls, and I play Portia and Venus on a show on Crackle called SuperMansion, which stars Bryan Cranston. I’m excited about the way my voice-over career has taken off. I’m pretty busy, yeah, and it’s all good, fun things, hopefully things that people from 8 to 80 can watch. I want to have a career [filled with projects] that the whole family can sit and enjoy together. That’s always been my goal.