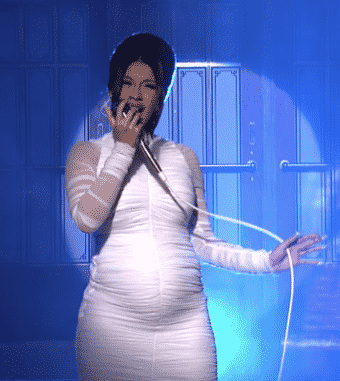 The Year of the Celebrity Baby is what 2018 should be named. Several of our favorite celebrity couples welcomed new additions to their family this year including John Legend and wife Chrissy Teigen, who announced the birth of their son just this morning (May 17).

There was even an addition to the royal family with Kate Middleton and Prince Williams’s, Prince Louis, being born just weeks before his Uncle Harry and Meghan Markle’s royal wedding. We can’t get enough of the cute A-List babies making their way into the world.

Take a look at our other celebrity favorites who are expecting within the coming months, below:

To add to her already breakout year with the debut of her chart-topping album, Invasion of Privacy, Cardi B, 25, will be welcoming the birth of her daughter with rapper Offset, 26, this summer.

Reality star and former Miss USA announced in April during the reunion of Bravo’s Real Housewives of Atlanta that she and new-husband and restaurateur, Marc Daly are expecting their first child. The couple eloped in June 2017.

The Carmichael Show star met Andrew while they both worked on the television show Greek. The couple married in December 2014 and announced that they are expecting their first child earlier this week.

The Food Network chef, 29, and NBA superstar, 30, wed in 2011 after being friends since their teenage years. They have since welcomed two beautiful daughters Riley Elizabeth,5, and Ryan Carson, 2. In February, Ayesha announced the pair is expecting their third child.

The former Desperate Housewives star married the Mexican business mogul in 2016. At the end of 2017, it was reported that Longoria is pregnant with their first child, a baby boy.

The supermodel and the New York Giants Wide Receiver married on March 3, 2018. This past Mother’s Day, she confirmed that she is pregnant with the couple’s first child.

After years of an on-again, off-again relationship, the two stars of Love & Hip Hop: Hollywood married in August 2016. In November 2017, they shared the news that they were expecting a baby girl this spring.

The singer and his wife are expecting their second child together any day now. Smith shared the news that the couple is expecting another baby boy; the couple’s older son, Shaffer is 2.

The Emmy Award-winning actress married the actor/director in the summer of 2011. Last New Year’s Ever they announced that they are expecting their first child.

The former Chicago Bulls player and ESPN college basketball analyst is expecting a baby with his fiancée. The bundle of joy is due to make his or her arrival on Oct. 5.

We can’t wait to welcome all the new celebrity babies this year.

Paul Carter Harrison, Trailblazing Playwright and Scholar, Passes Away at 85

Op-Ed: On MLK Day, Let’s Not Forget to Tap Into the We of Our Community