More than 150 years after Major General Gordon Granger rode into Galveston, Texas announcing immediate freedom for enslaved Blacks, Juneteenth celebrations are still a cultural touchstone for many African Americans.  This despite the fact that the original message of freedom was woefully late.  In fact, it is said to have been the last one delivered, clocking in at three years after the Emancipation Proclamation and almost two months after the final Confederate Civil War defeat.

Still, enslaved Galveston Blacks responded to this life-transforming news with glee. They began to mark the occasion of June 19, 1865 with barbecues picnics, parades, rodeos, games and prayer.

That commemoration continues to grow nationally and even internationally.  William Wiggins Jr, author of O Freedom!: Afro-American Emancipation Celebrations credits the Poor People’s March on Washington in 1968 as taking the celebration to a national audience when marchers returned home to other states with news about what many described as a July 4th replacement celebration complete with full-day of culinary delights, such as barbecue and homemade baked goods.

So this year, when you gather your family for summer reunion, pay homage to our collective ancestry Juneteenth-inspired eats.  From a mouth-watering barbecued brisket to an easy-to-make homemade ice cream topped with a fruit garnish, your relations will be forming a line to devour these cookout goodies.  We even threw in a handy downloadable grocery list to make sure you have everything you need to complete these treats. Download your grocery list here. 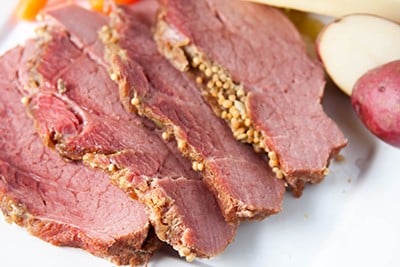 Sprinkle the brisket with Worcestershire and Pickapeppa sauce; rub over brisket with your hand. Stir the salt, celery seed, garlic powder, paprika, onion powder, chili powder and cumin together in a small bowl. Rub the brisket seasoning over the meat on all sides (including fat.) Wrap in foil and refrigerate at least four hours or overnight.

To cook, prepare a charcoal grill with your Kingsford Professional Briquets for indirect drilling. Heat to about 235 degrees.
Place the brisket, fat side up, on several layers of heavy-duty foil. Position foil-wrapped brisket away from heat in the center of grill. Cover grill.
Cook, adding about a dozen fresh coals to the side every hour and until the brisket is tender enough to shred, about 7 to 8 hours. Remove from heat; set wrapped brisket aside to rest about 10 minutes.
Unwrap brisket and transfer to a cutting board. Cut across the grain into thin slices. Place back on the boil wrapper; pour barbecue sauce over slices; let rest about five minutes. Serve with additional barbecue sauce. Makes 10 to 12 servings. 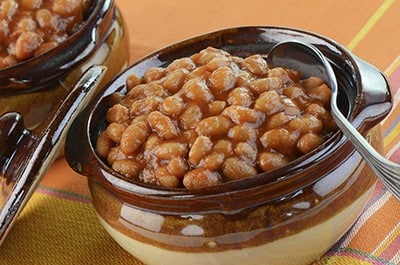 Place dried beans in a large bowl; cover with water Soak dried beans eight hours or overnight, Drain; place beans in medium saucepan; cover with fresh water.  Heat to a boil over medium-high heat. Boil until beans are just tender, but before skins begin to pop off. Drain; transfer beans to an earthen or other oven safe pot. Set aside.

Heat oven to 300 degrees.Meanwhile, add the salt pork cubes to a skillet over medium heat. Cook, stirring to release some of the fat, about 2 minutes. Add onion slices to the skillet. Cook, stirring, until onion begins to soften, about 4 minutes. Remove from heat; set aside.

Pour boiling water into a large bowl; stir the pork cubes and onion slices. Stir in the sugar, molasses and mustard. Pour the seasoned salt pork and onion mixture over the beans in the earthen pot. Bake until beans are thoroughly tender and dry, adding small amounts of boiling water as needed during baking. Makes 6 servings. 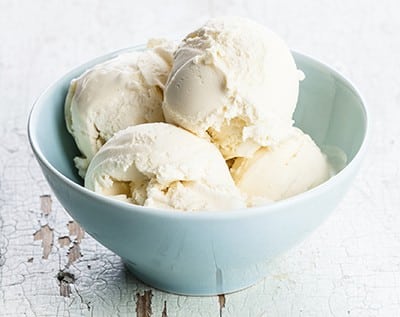 Beat cream, milk, vanilla and salt with a mixer on medium speed until mixture is thick and creamy, resembling whipped cream, about 4 to 6 minutes. Transfer to a freezer-safe food container. Serve scoops in dessert cups, garnished with raspberries, if using. Freeze at least 8 hours. Makes 1 pint, or 4 servings.