Fashion can be a source of escapism and transport us to alternate realities, time periods, and alter our state of mind. Fe Noel’s Spring-Summer '23 production tapped into the transformative nature of fashion, without compromising on design.

Shown on September 9th, Brooklyn-based designer Felicia Noel was able to depict all the strife and complexity of life in 2022. “Joy doesn’t mean absence of pain, and pain doesn’t mean absence of joy,” the creative shared in show notes. “I’m a fairytale-ist; I’m always thinking about how to make my life beautiful, how to create the life that I want to live. My life was going so great, and then a tragedy happened and I had to think about it in a different way, I had to say, ‘What am I supposed to learn here?’ And that’s when I was like, it’s important for me to tell that story, especially for anyone that’s down and feels like they don’t see a light at the end of the tunnel.”

The show had three themes to it, the first was "Softness," where the models gracefully walked in cascading ruffles of pale peach, metallic gold and deep brown. The second theme was "Darkness" to express the pain the designer experienced and the beauty that can come from suffering. For this, accents of ivory and black complimented detailed tailoring and suiting. The third act completed the journey with a heightened focus on "Rebirth and Joy," in which garments of black tulle, royal purple, multiple hues of green and pink florals were used to describe the liberation that can come out of a challenging season. 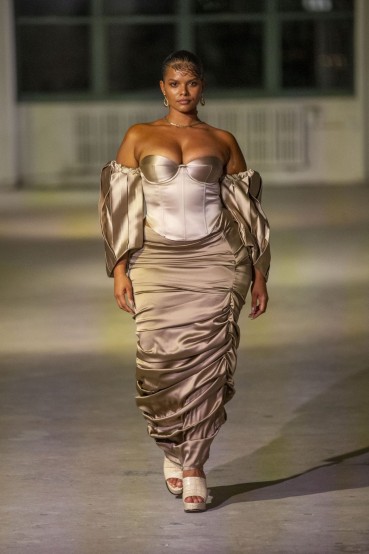 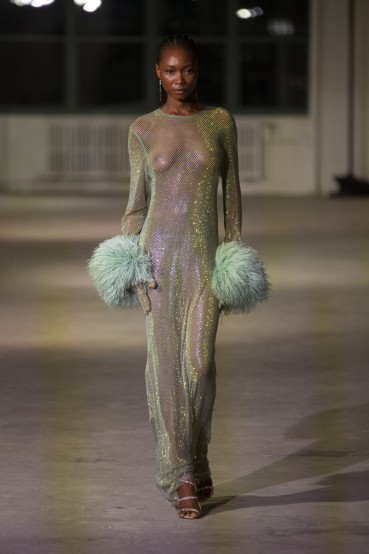 The real star of the show, however, was the final ball gown—a strapless corset gown with a ruffled petticoat called "Dre$$," made of paper money. The dress was created to highlight the 30 percent retirement income gap between men and women.

“I want to tell women, ‘Let’s not leave anything on the table anymore. Not money, not experiences. We can have it all, and we deserve it all,’” the designer shared.

The ‘Dre$$’ was also the debut of Fe Noel’s new partnership with TIAA to close the gap of #RetireInequality for good.

“I only participate in New York Fashion Week when I have a special message to share,” she wrote on her Instagram. Judging from the comments and emotions post-show, it’s safe to say the message was received.