Sometimes a denied prayer is the best blessing. At least that’s how it’s worked out for storied cartoonist Robb Armstrong, author of the widely syndicated strip “JumpStart.”

Fresh off of being this close to producing a major TV show, Armstrong was denied the opportunity. He took those hurt feelings and added them to a memoir he was writing. Turns out that being turned down worked out quite well for him. “Fearless: A Cartoonist’s Guide To Life,” published by Reader’s Digest, releases on Tuesday (April 26) and is a unique multi-part tome in that it’s a memoir, career digest and love letter to his mother, meanwhile rerunning many of Armstrong’s classic cartoons about an upwardly mobile black family.

Artists in particular will enjoy the tutorials on cartooning.

“FOX network’s [decision] not to send me up was an enormous lesson in disguise,” says the artist, speaking to EBONY.com from Los Angeles. “I was already writing [this] book and the biggest thing that has ever happened to me was happening… That TV burden was lifted. My comic strip had integrity and television does not. There would’ve definitely been a backlash with just me as the guy behind it, allowing it.”

That loss-win-loss-learn-loss-win scenario is the kind of through-line you will find threaded through Armstrong’s life story. While growing up in Philly, his brother got caught in the doors of a subway car and died in a gruesome accident. Another brother was severely beaten by police. Then, just two months into his college years, his mother died of cancer. His father, from whom he was estranged as a child but briefly reunited with as an adult, passed away too.

It’s enough to turn anyone into a hermit. Instead, Armstrong attained the status of having the most widely distributed cartoon strip of any African American author. Translation: really big deal. Sure, he got his degree in marketing from Syracuse University (where he started a long-running strip for the school paper) and he went on to win marketing degrees and an appreciable salary as an art director for big-name firms. Yet he couldn’t stop drawing and shopping his strips to anyone who would read them. Eventually that determination led to his snagging a syndication deal, which led to “JumpStart” being the largest African American-drawn comic in the world. 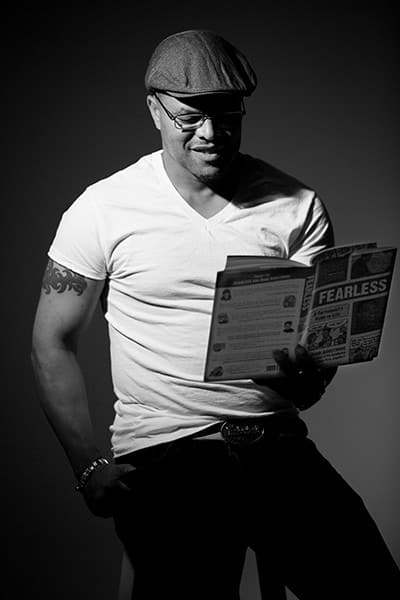 “Sometimes a person has a mission from God,” says Armstrong. “It’s a calling. If I receive a calling I have to act on it. [Mother’s] death sparked a new thing with cartooning. I literally sat there in my dorm room; catatonic. Then I walked into the Daily Orange with some work and [the editor] said ‘man these are really funny. I’m gonna be running them.”

That decision saved Armstrong’s life and it’s his big takeaway in “Fearless.”

“What my book is attempting to do is shine a light in this dark world we live in,” says Armstrong, now 54 and a father of two. “Crying is great because being aware you are going through tragedy is extremely important to building character. Only you have the constitution to live your life story.”

Adrienne Samuels Gibbs is a Chicago-based writer. Follow her @adriennewrites