“This is not an art project.”

But rather the collection of over 100 photographs is the life of photographer and Art Institute of Chicago instructor,  LaToya Ruby Frazier.

Inspired by Gordon Parks’ ideology of using the camera as a “weapon” to fight against racism, poverty and social wrongs, Frazier has spent the last 12 years focusing her lens on the collapse of the once booming steel mill industry in her hometown of  Braddock, Pennsylvania. Titled, Notion of Family,  the visual documentation also addresses and counters the “historic erasure, silence and media portrayal that trivialized and undermined Black life,”  Frazier explains.

“It is my expression of what it means to come of age during the toll of Reagaonomics in post-industrial America,” explains Frazier, a recipient of a 2015 MacArthur Fellows “Genius Grant.”  She should earn even more adulation for being the sole photographer among an elite group of awardees that includes  prominent writer and author, Ta-Nehisi Coates. “In this work my family, community and I are fighting for our survival and to escape the confines of poverty.” 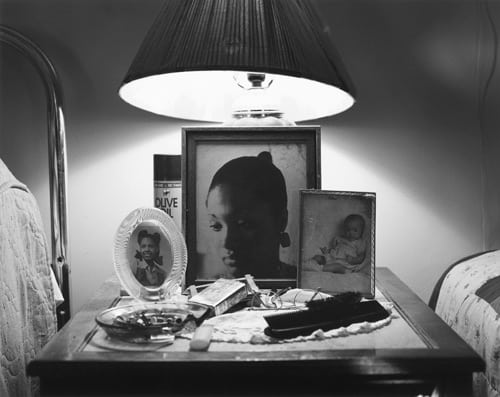 Frazier speaks in depth about the vision, the process, and the ongoing lessons during a one-on-one conversation with EBONY.com.

EBONY:  Congratulations on becoming a 2015 MacArthur Fellow.  Can you describe the feeling of having your work recognized in an even broader spectrum? How will you leverage this honor to expand or create your next body of work?

LaToya Ruby Frazier: When I received the news I was in complete denial, shock and overjoyed. I paced my small apartment meditating on this new responsibility I have now been charged with. I’m taking my time to understand how to handle the fellowship with sensitivity and care. As an artist and citizen, my work is committed to shedding light on overlooked residents in rust belt America that are endangered by gentrification, redevelopment and facing socioeconomic inequality in post-industrial working class neighborhoods. I will continue to expand my visual expression and documentation of these disparities challenging the status quo.

EBONY: Your artistic content in “The Notion of Family” deals with the absence of African Americans in the history of Braddock and the steel mill. Can you talk about the communal displacement and ailments of Black people as the city began to deteriorate?

Frazier: I set out to retell the collapse of the steel mill industry, global economy, loss of social services, environmental racism and healthcare inequity through the bodies of three generations of Black women: Grandma Ruby, who lived from1925 and 2009 Mom, who was born in 1959 and myself, born in 1982). Our lives are markers on a historic timeline as Braddock shifted from a prosperous melting pot when my grandmother grew up to a segregated redlined community losing jobs and suffering from white flight when my mother grew up to dismantled steel mills, the War On Drugs and disinvestment at the local, state and federal levels by the time I grew up. Dennis Dickerson, who wrote the essay Black Braddock And Its History to accompany my photographs, provides statistics and facts about how both social and economic discrimination Blacks faced while working in the mills prevented upward mobility. Just when the Black community was in the position to obtain equal footing outsourcing, trickle-down economy, union busting and a decrease in social services led us to poverty. Decades of housing discrimination, redlining and rezoning robbed us of property investments and education.

EBONY: When commenting on  The Notion of Family, the New York Times stated that you approached the community not as a concerned outsider but as a “vulnerable insider”.  Can you discuss that vulnerability and the intensity of having this work come from such a personal, yet political space?

Frazier: My practice as an artist and the collaborative photographs disrupt the classist and elitist viewpoint that only the wealthy, educated or the privileged can report, research and write about economy, politics, history, working and living conditions. I believe the answers to making a more equitable and sustainable future in the rustbelt resides in the families and individuals that have endured the greatest hardship. The people of these regions that outside reporters, journalists, commentators and politicians continue to ignore should not wait for mass media to tell their story. It’s not a matter of vulnerability, it’s a matter of empowerment. The intensity of the work coming from such a personal and political space  can be found in James Baldwin’s 1962 essay The Creative Process:

“The artist is distinguished from all other responsible actors in society—the politicians, legislators, educators, and scientists—by the fact that he is his own test tube, his own laboratory,[….] The precise role of the artist, then, is to illuminate that darkness, blaze roads through that vast forest, so that we will not, in all our doing, lose sight of its purpose, which is, after all, to make the world a more human dwelling place.”

EBONY: You chose to also inject yourself in The Notion of Family, and document your health ailment with Lupus. Did it take a lot of inner conversation and scrutiny to finalize that decision? Was it freeing?

Frazier: A major theme in my work is the body and landscape. These are integral parts of one another. Whether you are looking at an image of my mother and I or an actual landscape I am shooting them all as self-portraits. It was necessary for me to underscore my illness, Lupus, in the work with the landscapes due to the fact that Lupus is an autoimmune disease affected by areas of heavy truck traffic, exposures to benzene, asbestos, metals and UV radiation. All of these elements can be traced in the pollutants from the steel mills. The metals are atomized in the air and residents don’t even realize they’re breathing it in. 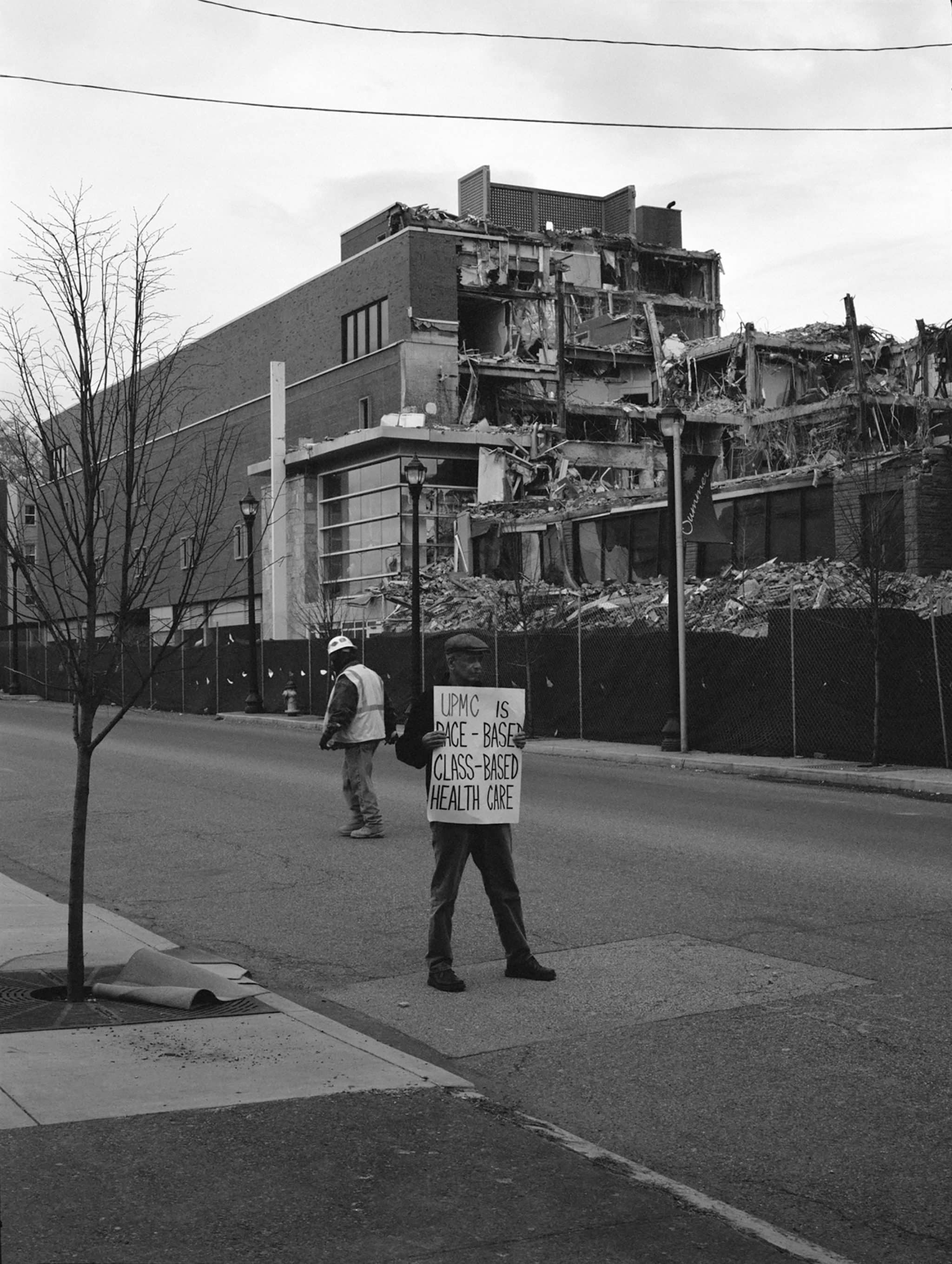 EBONY:  What is the significance of displaying the images in black and white?

Frazier: The aesthetic of my artwork comes from a long-standing tradition of artists, photographers and sociologists creating documentary work in early 20th century. When I first learned about the photographers of the Farm Security Administration (FSA) I became inquisitive about how the government used their photographs as evidence to show progress that Franklin D. Roosevelt’s New Deal was positively changing the living and working conditions during the 1930s Great Depression. One particular image that struck me was Dorothea Lange’s “Migrant Mother” Image, which became the iconic image of this period in American history. When I first saw the image in my photography class I wanted to know the name of the woman in the photograph. Most Americans do not know the name of the woman, yet she is the face of this historic moment. Also the photographer, Dorothea Lange, was relieved of her assignment when she challenged the head of the FSA about including her field notes with the image. In the end both women were silenced by the corporation and the government. My collaborative portraits with my grandmother and mother seeks to gain the authorship, agency, perspective and voice that I felt was denied to early 20th century subjects like Florence Owens Thompson in the iconic image “Migrant Mother”. As an artist when you are critiquing and updating a tradition, the concept must be reinforced through the aesthetic. In this case social documentary of the 1930s came in the form of matted Gelatin Silver Prints; Black and White prints. My photographs update and challenge this history and argue for validity of a new radicalized social documentary today that documents conditions of rustbelt revitalization.

EBONY: The work of Gordon Parks is instrumental in your approach as well. Can you explain your connection to him and his lens? Is there one of his photographs or a specific series of his that is prominent in your technique?

Frazier: In 2001 I was photographing families living in homeless shelters to raise awareness that Erie PA had the highest amount of homeless children at that time. One day I gave a portrait to one of the women in the shelter. She looked at it and told me that the image of her reminded her of Gordon Parks, a photographer she saw on television once. She encouraged me to look at his work. I ran to the bookstore and purchased his book Gordon Parks Half Past Autumn A Retrospective 1997. At the same moment, my mentor began teaching about the photographers from the FSA in the 1930s. Gordon Parks was the only Black photographer on that assignment. In 1942 while working in the FSA building in Washington D.C. he met Ella Watson who had been mopping the floors. It was his photographic series on Ella and specifically his portrait of her, entitled American Gothic, 1942, that taught me how to speak through photographs. With a direct reference to painter Grant Wood’s American Gothic 1930 Gordon Parks positioning Ella Watson in front of the U.S. flag with one broom and one mop in her hand said it all about the social and economic inequality we face in this country and capitalist system. My work follows the values of Parks to use the camera as a weapon against poverty, intolerance and discrimination in America. 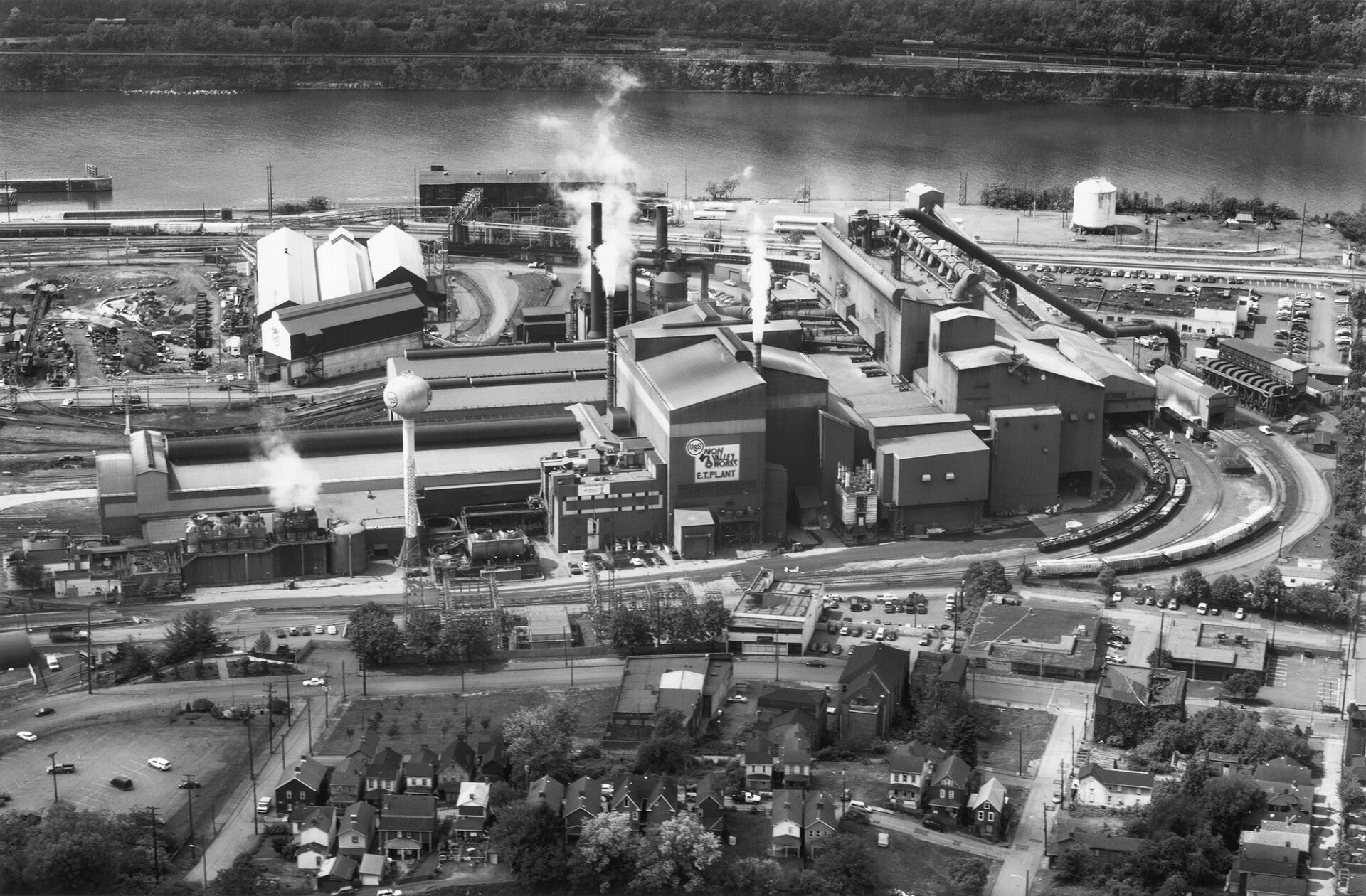 EBONY: In the process of documenting Braddock, your family, the health system and deconstruction, what have you learned? How do you see this body of work contributing to change solutions?

Frazier: I have learned and continue to learn that it is imperative and urgent for the future of this nation that we look at our society through the perspective, voices and lives of the working class. With the MacArthur Fellowship I will continue to use my artwork to amplify these voices and perspectives until there are new policies and laws in place to protect working class communities living and working conditions.