Our team is at a complete loss whenever BLACK men disrespect BLACK women. Like, really who birthed you?

We’re familiar with NBA baller, Gilbert Arenas’ slanted and offensive view of women. Recall, if you will, the time he made sexist remarks toward the WNBA.

Welp, on Friday, the athlete hit the Twitter trending block for saying that dark-skinned Black women aren’t pretty. The conversation, captured by Baller Alert on Instagram, can be read below. 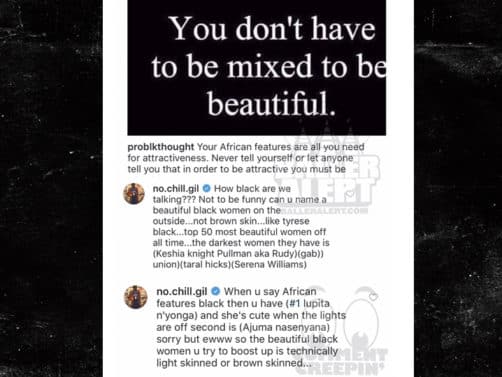 “How black we talking?? Not to be funny can you name a beautiful black woman on the outside … not brown skin … like Tyrese black.”

Yeah…you’re right. It’s not funny in any way. In fact, it’s pure ignorance for you to have the audacity and feel the least bit of ‘ok’ to pose such a question and then top it off with another level of insults.

Boy, who raised you?

And if your quiz was to be taken seriously when asking people to “name a beautiful Black woman on the outside.”

We’ll leave you with just a few examples …Whooop…here it is. Shout out @TNice252!

Gilbert Arenas: “Can you name a beautiful dark skinned woman”

And what do you do after making a big mess? You try to clean it up. Fail.

“I thought I was saying if you’re mixed you’re not considered black and beautiful and my kids are dark skinned so I perceived it how I wanted to. I was trying to defend all shades of black but that’s what the post was also doing.”

So Gilbert Arenas bashed dark skinned BW -then tried to renege by blaming the post he commented on which contained uplifting message for BW: pic.twitter.com/HVgHvcYzMp

In the words and tone of Kendrick Lamar, “sit down.” But we will go ahead and agree Arenas isn’t cute to 95% of us, especially after making these triflin’ statements.