The moment that actress Merle Dandridge read the script for the role of estranged prodigal daughter Grace “Gigi” Greenleaf, she was enchanted by the “beautifully and wonderfully drawn character.”

With a theater background, starring in Broadway plays including Spamalot, Rent, Aida and Tarzan, and recurring roles on TV shows Sons of Anarchy and The Night Shift,  scoring her first leading role in Greenleaf, was the opportunity Dandridge had been waiting for.

“I was really moved by the very nuanced and complicated relationships that she has and how she was still trying to walk the righteous line,” Dandridge tells Ebony.com. “She’s not always doing it well or right but her heart was always toward doing the right thing and bringing justice to the front and a personality like that, I thought, ‘Oh, I just love her.’ I fell in love with her right away.”

Greenleaf, a drama on the Oprah Winfrey Network about the family of a megachurch in Memphis opens with Grace, an ex-pastor turned journalist, who returns home 20 years later due to the mysterious death of her sister Faith. As the season progressed, Grace set out to find answers to her sister’s death which leads to a dark path that connects to a history of sexual abuse at the hands of their uncle Robert “Mac” McCready played by Gregory Alan Williams. Using her journalist sensibilities,  she soon unravels a series of scandals tied to her father’s church and the Greenleaf family is hit with a treacherous storm.

Debuting in  June 2016, Greenleaf brought in 3 million viewers and became the largest series premiere in the history of the network. In season 2, airing March 15,  viewers will see the dynamic of the Greenleaf family be put to the test.

Below, Ebony.com spoke to Dandridge about the success of Greenleaf  and why fans will be on the edge of  their seats this season. 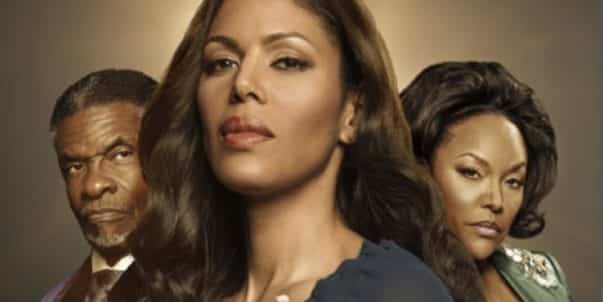 EBONY: After the shocking season finale with scandals, secrets and the return of Uncle Mac, what can we expect in season 2?

Merle Dandridge: Well since we brought all of those things out to the light, the veils were pulled back. And now, we are just bare, the Greenleafs are on display. You get to see into the individual character of each one of them and how they became this Greenleaf legacy. They’re made of tough stuff even when the veil is pulled back and secrets are revealed, we get to see the grit that they’re made of and how they got to be where they are.

EBONY: Will Grace ever embrace, as Bishop Greenleaf puts it, “picking up the cross” of her calling as a pastor?

MD: I think that there’ll always be this “push-pull” with Grace and ministry. When she was this, as Deacon Sykes say, a “prophet of a preacher”, there was something that comes from when you are youthful. When you’re young and you’re just finding that fire and that feel for God that has a purity to it, I think that Grace has always seen that connection with God much more simply than the parading and status. I think she’s always going to have a conflict with that, with the actual pure relationship that she has known and that connection she has had as a young preacher to the actual adulting and business side of it. Now that she is the adult and she is on the business side of it, it’s hard for her to navigate those two things. So I think there’s always going to be that she’s trying to get back into God but also trying to make sense of the other part of it.

EBONY: Like Nova Bordelon in Queen Sugar, Grace has brought another representation of Black female journalists to television that’s great to see. How do you think it has served her mission to uncover truths?

MD: What I also love is that you come to understand how and why she became a journalist. Why she’s impassioned about that because  as a child she was voiced with silence when she would try to bring those truths to the surface and her voice was squashed. She found another way to [become the] voice [for] the voiceless and I think that is a really important character point because we come into our passions birthed out of something and I loved that it’s such a fully drawn character.

EBONY: Grace has a tendency of letting her family talk down to her and she has trouble standing up for herself. Will we finally see Grace put her foot down and set boundaries with her family?

MD: In the first season when you come home after a long period of time and you just find yourself in the same piece of the puzzle or the same slot in the wheel, you just step right back into your same old role. I think that she found herself doing that when she came home and over the course of the season, slowly realized this is no longer acceptable. These old patterns of behavior may not abide anymore. So since all of these things got blown out of the water in season one, of course, coming into season two the relationships have to change and she has to change. She has to react to them differently. There is also a limit to how much she will take and that was one of my big points going into the season with Grace that, you know, it’s different now. Now you have to face it, now you can’t talk to me like that.

EBONY: Do you ever think that Grace and Lady Mae (Lynn Whitfield) will have a “come to Jesus” moment to mend their strained mother-daughter relationship?

MD: No matter what goes down between Grace and Lady Mae, at the heart of it, they have a desire for one another’s love and there is this rooted blood connection. They are family no matter what and there’s something about the mother-daughter bond that no matter what they may say to each other, what may go down, there’s still that thing that connects them. Because of that, it’s always going to be a hunger for one another’s love or they’re always going to want something from one another. And I know fundamentally that Lady Mae and Grace love one another, there will always be the potential for anytime they may butt heads for it to turn to “I just really need you to love me right now.”  And if they catch each other in the right moment, who knows?

EBONY: Speaking of that relationship, many fans have come up with theories on social media evolving around the idea that Grace could be the love child of Aunt Mavis (Oprah Winfrey) and Bishop Greenleaf (Keith David), explaining Lady Mae’s treatment of her. What do you think?

MD: When I hear people daydreaming about those things, imagining and working out all of the character nuances like, ’Oh this must be because of such and such…” I’m like, I wish you would come and study with me too because you have great ideas because that’s what I do. I sit there and I just dream up all of these relationships and scenarios that have happened.

I have a hundred of scenarios of things that have happened over the years and through Grace’s childhood with Lady Mae that informed the relationship that they have now. It’s not for nothing, It’s because of a lifetime of interactions that happened between them that they have this relationship now, and the fact that the fans do that, that they care enough and think about the characters enough to do that, that is so exciting to me. I love it!

EBONY: We saw the intersection between Grace’s faith and her family’s religious legacy, especially during the infamous table scene in episode one, that has been both praised and criticized. How do you feel about Greenleaf’s approach to faith?

MD: I think they do a great job of looking at it from several different points of view and because we all have different relationships with faith. Either we’ve really grown up in the church or we came to the church late in life needing something more or we’ve been really burned by the church. There’s a multitude of ways that the church and faith have together and separately impacted us. We all have opinions about it, you know? I think that Greenleaf does a great job of exploring all of those points of view so that everyone’s heart and voice and journey, you can see yourself in the different characters’ approach to the church.

EBONY: There’s been such a positive response toward the show from fans and critics. What is the most gratifying about being on a series of this magnitude?

MD: I’m still riding that wave because it’s something when people walk up to you and go, ‘Hey pastor!’(laughs) They really have related to Grace and I’ve never had that in such a large volume and when I look online and see how people are so emotionally invested, it tells me they believe our work. If we’ve done something to stir their heart or heal something or just got their spirit stirred in any kind of way, we’ve done our jobs as artists. That is extremely gratifying.