A girl watches as the authorities arrive to evacuate people from her house in Tabarre, Haiti. AP /Dieu Nalio Chery
By Neffer Kerr  | October 6, 2016
Share

Before I get into my main point, I must address how the Weather Channel has been covering Hurricane Matthew and its devastating effects on the country of Haiti.

There is this image of Hurricane Matthew over Haiti that has gone viral. Not because people actually give a damn about what happens to Haitian people, but because Weather Channel Senior Meteorologist Stu Ostro (who took the photo) decided it looked like a skull to him and that was the imagery he chose to present for the world to see. 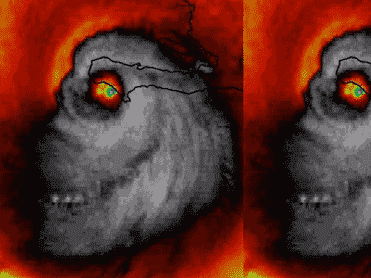 Now, does it resemble a skull? Somewhat, but it could also resemble other things if that is what was put into people’s heads. It doesn’t help that they made the photo grey, red, and somewhat sinister looking as well.  Personally, I wonder what his thoughts about Haiti were before he took that shot (insert sarcastic tone).

So naturally, ad nauseum, thousands of people have chimed in on social media supporting this biased stupidity. It NEVER fails, whenever tragedy or a natural disaster strikes Haiti, some simpleton insinuates that it is because of the “devil” or other satanic based logic, as if Haitian people have earned or deserve such atrocities. They do not, because if that were the case, the Vatican would have been gone by now based on the insurmountable number of abuse cases alone. No one says this about any other place in the world and I find it ignorant and tiring.

What I also find to be Jedi-level ridiculous is the selection process used by Facebook to create profile filters to show care and solidarity for a particular country or cause. When it comes to Haiti or Haitian people, such an option is absent. There is still currently a genocide of Haitian people being “ethnically cleansed” in the Dominican Republic that is still not being talked about. Haitian people are currently being cut up with machetes and bludgeoned in the street in 2016.

Yet, where are the flag filters for that Facebook?

When tragedy struck in France, there was a special French flag filter that everyone and their mother could use on Facebook to show that they were standing with France—and the racist cartoonist who was killed by some extremists who didn’t take too kindly to his interpretations of their culture. I saw people who don’t speak a lick of French, have never been to France, and don’t know anyone there, using this filter for weeks. Why? Because when jacked up things happen in the world, we should care. Except for when it happens in Haiti.

People really need to cut it out and check their preconceived notions, stereotypes, and ignorance at the door. There is no other country in the world that is vilified and demonized the way Haiti is. I am beyond tired of seeing this multitude of infidels online claiming that any negative thing or natural disaster that happens in Haiti is because of a “devil” or the beautiful culture and history of Haitian people.

Let’s talk facts for a minute. Between 1791 and 1804, Haitian slaves rose up and rebelled. They used their belief systems and religion as motivation and solidarity to overthrow the French. This was the only successful slave revolt and ever since then, they have been treated like the scourge of the world. Ignorance, stereotypical Hollywood movies, lies, and an overall unwillingness to be open to a different culture made it very easy to demonize the Haitian belief system Vodun and turn it into the anti-thesis of Christianity, which it is not.

There is a particular trend when it comes to these profile filters. At first I thought I was just being hypersensitive—I usually am when it comes to racial inequities—but then I noticed that it seems like every time a major tragedy or catastrophic event hits a heavily melanated population, there are no filters or worldwide outpouring of support on Facebook.

While it was tragic that twelve people were killed in France along with a cartoonist from the satirical French magazine Charlie Hebdo, why was there no filter for the 147 dead students killed in Kenya at Garissa University or Nigerian Flag filters for the multiple bombings, kidnappings, and murders by the Boko Haram? I know some people made their own, but why not the same show of solidarity for Haiti and African countries pushed by Facebook like other events?

Just something that makes me go hmm…Where are the profile picture flags being advertised to say we stand with and support them as well? Why are we forced to seek out and create our own filters to stand in solidarity with those who live in melanted countries when they are affected, often on a grander and more frequent scale, by tragedy?

Just something for the Facebook developers, and the world to think about.

Click here if you wish to find a flag filter for a country that is under represented.