Angela Bassett is undoubtedly one of Hollywood’s most talented actors. The captivating Yale Drama School grad has blessed the masses with her gift for over 30 years, starring in fan favorites such as What’s Love Got to Do with It, Waiting to Exhale and How Stella Got Her Groove Back.

Highly regarded for her ability to connect deeply with her characters, Bassett has countless memorable on-screen moments under her belt. In celebration of the timeless beauty’s 60th birthday today, check out some classic scenes from the icon that are sure to remind you why we all fell in love with the legend’s impressive body of work.

As Katherine Jackson finding out about Joe’s affair in The Jacksons: An American Dream

The respected screen queen showcases a range of emotions when, as matriarch of the Jackson clan, she discovers husband Joe is having an affair in the timeless television miniseries.

Bassett as Tina Turner finally fights back after suffering through an abusive relationship with husband Ike Turner, played by Laurence Fishburne. Both leads were nominated for Best Actress/Actor Academy Awards for the film, losing to Holly Hunter and Tom Hanks.

Setting her cheating husband’s car ablaze in Waiting to Exhale

The Image Award winner is every woman scorned while burning her man’s clothes and car in Waiting to Exhale. Even more impressive, the entire scene was improvised!

The subtlety and stillness of Bassett’s performance as civil rights icon Rosa Parks is acting at its finest.

After loosening up a bit, Stella and Winston truly connect for the first time during this sensual session on the dance floor.

Bassett, Jessica Lange and Kathy Bates have remarkable chemistry throughout American Horror Story: Coven, with Bassett reading one of her workers for filth after realizing he failed to follow orders the first time around.

Worthy quickly sets an insurance man straight in the 2015 Spike Lee joint set against the backdrop of gang violence in Chicago. 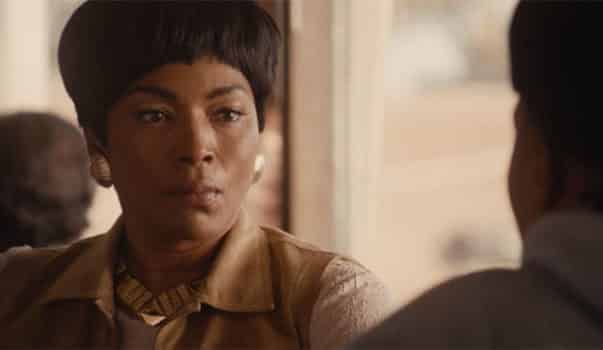 The episode that earned Lena Waithe the first Comedy Writing Emmy for a Black woman, “Thanksgiving,” finds the actress earnestly expressing her fears as the mother of a lesbian woman of color.